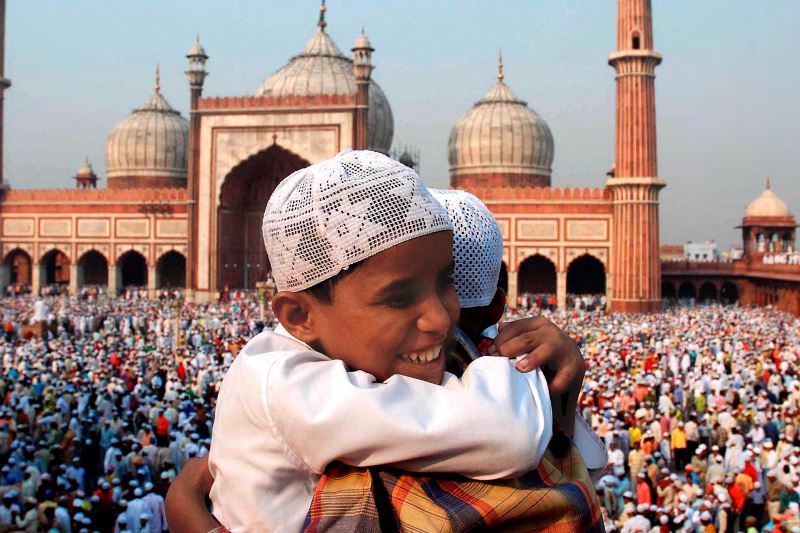 The Takbeer is Sunnah Mustahabbah in the days of Tashreeq as Allah سبحانه وتعالى says:

“And remember Allah during the appointed Days”

These appointed days are the days of Tashreeq (The days of Hajj) and this was mentioned by Ibn ‘Abbaas (ra) as reported by At-Tabari in his Tafseer from multiple chains. ‘Eid Al-Adhaa is one of these days representing the meat, food and drink and the Takbeer is legislated from the morning of the day of ‘Eid Al-Adhaa until the last day of Tashreeq.

It is also valid to begin the Takbeer on the morning of the day of ‘Arafah as was related by Muhammad Bin Abi Bakr Ath-Thaqafi who said: “While we were going from Mina to `Arafat, I asked Anas bin Malik, about Talbiya,“How did you use to say Talbiya in the company of the Prophet?” Anas said: “People used to say Talbiya and their saying was not objected to and they used to say Takbir and that was not objected to either” as recorded by Al-Bukhaari.

Ibn Abi Shaibah, Al-Bayhaqi and Al-Haakim reported from ‘Ali (ra) that he said: “That he used to make the Takbeer from the morning of the day of ‘Arafah until the ‘Asr of the last day of Tashreeq and make Takbeer after ‘Asr.”

In any case the issue is wide and not restricted. The Takbeer is not specified for the obligatory or non-obligatory prayers but rather it is an absolute and unrestricted Takbeer for every time and any situation for men and women equally as there has not been stipulated any restriction or specification considered for the Takbeer in the two ‘Eids.

Anas (ra) related: “The Messenger of Allah ﷺ would not proceed (for the prayer) on the Day of `Eid−ul−Fitr unless he had eaten some dates. Anas also narrated an addition: He ﷺ used to eat an odd number of dates” as recorded by Al-Bukhaari, Ahmad, Ibn Hibbaan, Al-Haakim and Ibn Khuzaimah.

Sa’eed Al-Khudri (ra) narrated: “The Messenger of Allah ﷺ used to have breakfast on the day of Fitr before he would leave his house (for prayer) and he did not pray before the (‘Eid) prayer and when he had performed his Salaah he would pray two Rak’ahs” as related by Ahmad and Al-Haakim. Ibn Khuzaimah and Ibn Maajah related it and included: “When he returned he prayed two Rak’ahs in his house”.

In Summary I say: That it is Sunnah on the Day of ‘Eid-ul-Fitr for the Muslim to eat some food first and then leave his house for the place of prayer and that it is Sunnah on the day of ‘Eidul-Adhaa for the Muslim to leave his house and go to the Musallaa first, then pray and after that return to his house and eat from the meat of what he has sacrificed if he has it and if not to eat from food that he has in the house.

3. Varying the route for ‘Eid

It is Sunnah for the Imaam and the worshippers to go to the Musallaa upon a certain route and then return from it to their homes taking a different route. Jaabir (ra) narrated: “The Messenger of Allah ﷺ used to take different routes on the day of ‘Eid” as related by Al-Bukhaari.

Ibn ‘Umar (ra) said: “That the Messenger of Allah ﷺ used to leave to go to the two ‘Eids upon a certain path and then return upon another path” as related by Ahmad, Abu Daawood, Ibn Maajah, Al-Bayhaqi and Al-Haakim.

Abu Hurairah (ra) narrated: “When the Messenger of Allah ﷺ went out for the ‘Eids he would return upon a path that was different from the path that he had left from” as related by Ahmad, At-Tirmidhi, Ibn Hibbaan, Ibn Khuzaimah and Al-Bayhaqi.

It is Sunnah on the day of ‘Eid to sing, to beat a tambourine or small drum, to blow a musical instrument and to dance with weapons. And it is Sunnah to display joy and happiness in it and there is no problem for people who can sing and dance to accompany the Imaam when he is going to the Musallaa (place of prayer) singing and dancing around the Imaam and behind him.

‘Aa’ishah (ra) said: “Abu Bakr came to my house while two small Ansaari girls were singing beside me the stories of the Ansaar concerning the Day of Bu’aath. And they were not singers. Abu Bakr said: ‘Musical instruments (blowing instruments) of Satan in the house of Allah’s Messenger!’ It happened on the `Eid day and the Messenger of Allah ﷺ said: ‘O Abu Bakr! There is an `Eid for every nation and this is our `Eid” as related by Al-Bukhaari, Muslim and Ahmad.

‘Aa’ishah (ra) also narrated: “A group of Abyssinians came to the Masjid and were dancing on the day of ‘Eid. The Messenger of Allah ﷺ invited me to see and I placed my head on his shoulder and began to see their sport till it was I who turned away from watching them” as recorded by Muslim, Ahmad and AnNasaa’i.

Qais Bin Sa’d Bin ‘Ubaadah narrated: “…That the Messenger of Allah ﷺ used to have drumming and singing performed for him on the day of ‘Eid” as reported by Ahmad and Ibn Maajah and Ibn Maajah also reported from ‘Aamir that he said: “’Ayyaad Al-Ash’ari witnessed ‘Eid in Al-Anbaar (A place) and said: I do not see you drumming and singing like it was done in the presence of the Messenger of Allah ﷺ”.

5. Staying of the Imaam amongst the people after the prayers of ‘Eid

It is Mustahabb (recommended) for the Imaam wait for a while to leave until the worshippers have left after performing the ‘Eid prayers and to look into and check the affairs of the people and pass Salaam to them.

Abdur Rahmaan Bin ‘Uthmaan At-Taimi (ra) narrated: “I saw the Messenger of Allah ﷺ standing in the market on the day of ‘Eid looking at the people (checking in on them) whilst they were passing by” as related by Ahmad and At-Tabaraani related it with the following wording: “I saw the Messenger of Allah ﷺ when he was leaving from the ‘Eids go to the middle of the Musallaa, and he looked into the people, how they were doing and their characteristics and he would stand for an hour before leaving”.

6. To not pray before the ‘Eid Salaah or after it in the Musallaa

This is the Sunnah in the two ‘Eids and Abu Sa’eed Al-Khudri (ra) related in regards to this: “The Nabi ﷺ prayed two Rak’ah for the prayer of ‘Eid-ul-Fitr and he did not pray before or after it and then he approached the women and Bilaal was with him. He then ordered them to give Sadaqah and they threw their necklaces and bangles (as Sadaqah)” as recorded by Al-Bukhaari, Muslim, Ahmad, Ibn Khuzaimah and Abu Daawood.

Ibn ‘Umar (ra) said: “That he went out on the day of ‘Eid and did not pray before it or after it and he mentioned that this is what the Nabi ﷺ did” as related by Ahmad, At-Tirmidhi and Al-Haakim.

The above is an extract from volume 2 of Al-Jami li Ahkam as-Salah “A complete guide of the rules of prayer” by Sheikh Abu Iyas Mahmoud bin Abdul Latif al-Uweida from Jordan.