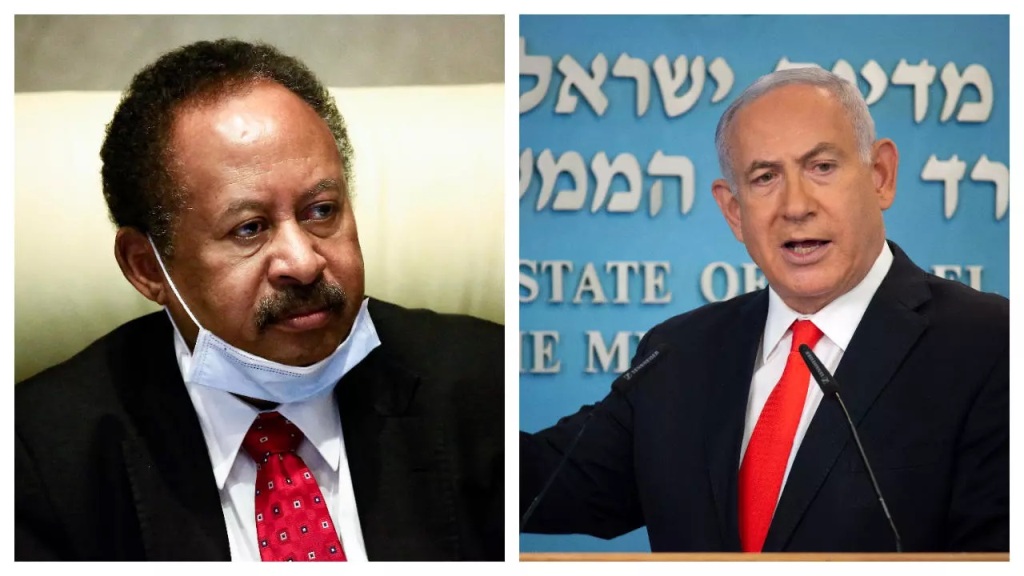 After days of misleading the people of Sudan, and the lies of Prime Minister Hamdok, who said that his government is not authorized to discuss the issue of normalization with the Jewish entity, and that he calls for the issue of normalization to be separated from removing Sudan’s name from the list of countries sponsoring terrorism, the truth emerged: that there is no difference between al-Burhan and Hamdok, and other rulers of Sudan, who are submissive and subjected to American blackmail, which linked the removal of Sudan from the American blacklist with normalization with the Jewish monster entity.

What happened today, and is announced, of the normalization of relations between Sudan and the Jewish entity, is a stain on the transitional government, and a betrayal to Allah, His Messenger and the believers.

We in Hizb ut Tahrir / Wilayah of Sudan, regarding this submissiveness of the Transitional Government, its acceptance of Trump’s conditions and its normalization of relations with the Jewish entity that usurped the land of Isra and Mi’raj, we confirm the following:

First: What happened today is considered a betrayal to Allah (swt) and His Messenger ﷺ, Islam and Muslims, and a deep stab on the back of the Ummah.

Second: This normalization does not represent the Muslim people of Sudan, but rather only those who carried it out, from the agents of the kaffir West, and their tails from the rulers and politicians, who sold their Deen to the world of others.

Third: No matter what normalization they carry out, and whatever betrayal of the issue is perpetrated by agents and hypocrites, Palestine will remain an Islamic sacred land, that needs someone to liberate it from the clutches of the Jewish entity’s occupation. And this will soon take place, Allah willing, at the hands of Muslim soldiers, the soldiers of the second Khilafah Rashidah (rightly-guided Caliphate) on the method of the Prophethood that will be established soon, Allah willing, which applies the saying of the Messenger ﷺ; on the authority of Abu Hurairah that the Messenger of Allah ﷺ: «لَا تَقُومُ السَّاعَةُ حَتَّى يُقَاتِلَ الْمُسْلِمُونَ الْيَهُودَ، فَيَقْتُلُهُمْ الْمُسْلِمُونَ، حَتَّى يَخْتَبِئَ الْيَهُودِيُّ مِنْ وَرَاءِ الْحَجَرِ وَالشَّجَرِ، فَيَقُولُ الْحَجَرُ أَوْ الشَّجَرُ: يَا مُسْلِمُ يَا عَبْدَ اللَّهِ، هَذَا يَهُودِيٌّ خَلْفِي فَتَعَالَ فَاقْتُلْهُ» “The last hour would not come unless the Muslims will fight against the Jews and the Muslims would kill them until the Jews would hide themselves behind a stone or a tree and a stone or a tree would say: Muslim, or the servant of Allah, there is a Jew behind me; come and kill him” [Al-Bukhari]