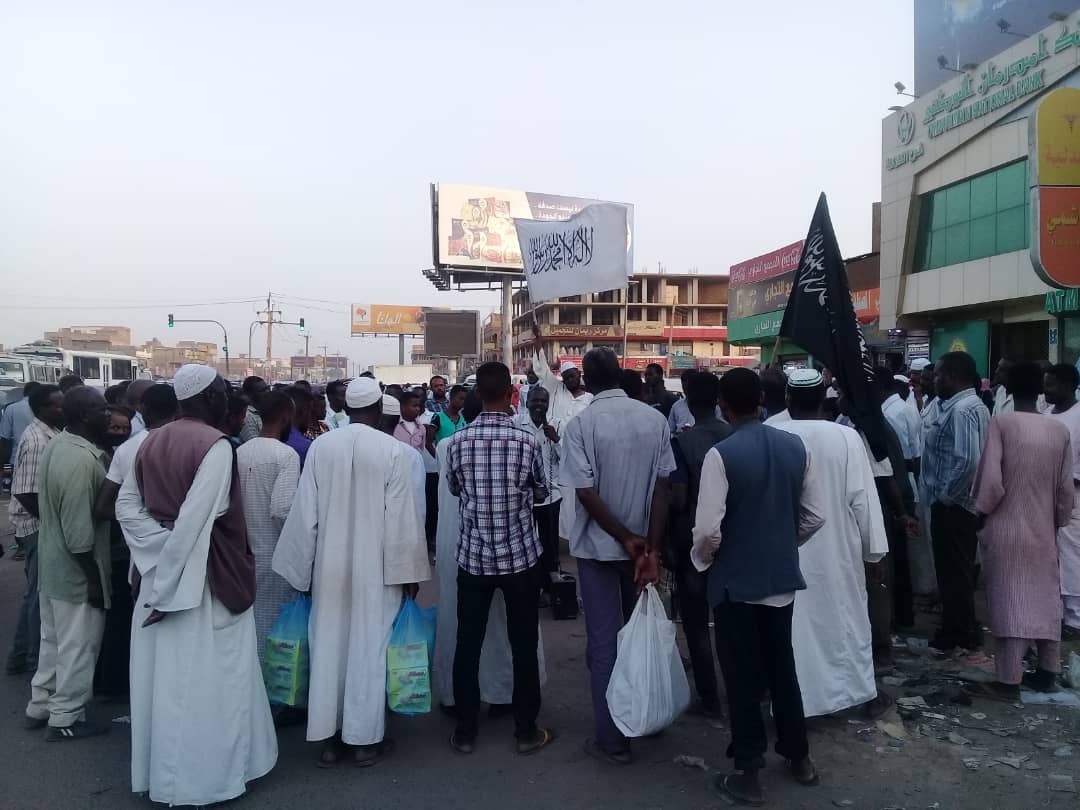 A continuation of the public actions held by Hizb ut Tahrir / Wilayah Sudan in the various regions and regions of the country to create an informed public opinion of the provisions of Islam and its solutions related to the various systems of life, which dealt with various topics, including the crisis of governance, lifting fuel subsidies, abolishing the customs dollar, and autonomy…

The Shabab of Hizb ut Tahrir / Wilayah Sudan, in Khartoum locality, held on June 21, 2021, its political address, in Jackson Square in central Khartoum titled: “Removing fuel subsidies, the real causes and the core solutions”, in which the first speaker, Mr. Mujahid Adam, spoke of the real reasons for the decision to lift the fuel subsidy imposed by the government on the people and pointed to the catastrophic effects of this decision, which doubled the population’s suffering.

As for the second speaker, Ustaadh Fadlallah Ali, demonstrated the real radical solutions that stem from the Ummah’s belief, which is a comprehensive political idea that addresses all the problems of life, and which will not exist in reality except through the establishment of the second rightly-guided Caliphate state on the method of Prophethood, which amplifies the energies of the Ummah and enables people to utilize the real resources that the country abounds in, and to ensure that the basic needs of the people are fully satisfied for each member of society.

Under the title: “Giving Autonomy to the Blue Nile and South Kordofan region, the fragmentation of the rest of Sudan,” the Shabab of Hizb ut Tahrir / Wilayah Sudan in Madani locality held a political address at the bus station and square of the Great Market on Tuesday, June 22, 2021, in which Ustaadh Abdel Aziz emphasizing that the Transitional Government is following the path of the so-called national governments and concludes treacherous agreements such as the Juba Agreement and gives the region of Southern Kordofan and Blue Nile autonomy, which leads later to the right to self-determination and then separation.

On the same subject, the Shabab of Hizb ut Tahrir / Wilayah Sudan held in Omdurman West locality on June 23, 2021 in the Souq Libya addressing a policy titled: “Giving autonomy to Blue Nile and Southern Kordofan is the fragmentation of the rest of Sudan” in which Ustaadh Ishaq Muhammad Hussein spoke, starting with the news of the ill-fated decree issued by Al-Burhan granting autonomy to the two regions based on Article 8 of the Juba Agreement. He also indicated that this agreement is similar to the one that preceded it in Addis Ababa in 1972, which led to the separation of South Sudan in 2011.

The political address to the Shabab of Hizb ut Tahrir / Wilayah Sudan in the city of Gedaref also came under the title: “Autonomy is the beginning of secession and the squandering of wealth,” on June 24, 2021, in Rowena King Square.  Addressing the audience, Ust. Balla Mahmoud, who started his speech describing what had been recently given to the two areas (South Kordofan and Blue Nile) that the autonomy is a great betrayal, and the continuation of the implementation of the American criminal scheme to divide Sudan into several countries, starting with South Sudan. The speaker also mentioned that this government, with its civilian and military sides, is silent with its ten fingers on this major betrayal that no sane person would accept.

Under the title: “Sovereignty is for the Sharia and the Sultan is for the Ummah,” the Shabab of Hizb ut Tahrir / Wilayah Sudan held a political address on June 27, 2021 in Al-Kalakla Al-Lafa, in which Ustaadh Al-Fateh Abdullah spoke, who stated that sovereignty and governance are for the Sharia and not for the people to legislate for themselves through the legislative councils (parliaments). He also made it clear that the authority is for the Ummah and it is the nation that chooses its ruler with a legitimate allegiance, by consent and choice.

The political address to the Shabab of Hizb ut Tahrir / Wilayah Sudan, Omdurman West locality, entitled: “The failure of man-made regimes.. and the Caliphate is the Solution,” on June 28, 2021 in the Souq Libya, in which Ust Abd al-Rahim Abdullah spoke, who stated that the successive governments of Sudan, since independence and to this day, have been secular governments, civilian or military, and all of them have failed to manage and advance the country. Rather, it has descended into the abyss, and we are still burning with the fires of these man-made regimes.

The Shabab of Hizb ut Tahrir / Wilayah Sudan, in Khartoum locality, held on June 28, 2021, its political address, which it holds periodically in Jackson Square in central Khartoum, entitled: “Rules of the System of Government in Islam.”  Ust. Muhammad Al-Munir, who started his talk about Prime Minister Hamdok’s initiative related to protecting the stage, spoke in which he referred to the divisions between the components of the transitional partnership, represented by the division between the military and civilian components, the fragmentation within the military institution and the differences between the components of the civilian side. He explained clearly and blatantly that the cause of these fragmentation and divisions between the two parties is due to the employment of these parties. The military establishment is loyal to America, and the civilian side works in the interest of Europe, led by Britain. The foreign embassies are the ones that brought these rulers.

On the governance crisis, the Shabab of Hizb ut Tahrir / Wilayah Sudan in the Dekhainat locality held a political address on June 29, 2021 in the Al Kalakla market, entitled: “Only Islam is the one that unites the people and solves their problems,” in which Ustaadh Abdallah Hussein spoke about the state of divisions between governance components in the country (military component – army and quick support – armed militias – and civilians), he also warned of the West’s plan to tear Sudan to more than one entity by provoking tribal and regional strife, explaining that Islam alone unites the people after holding the rope of Allah.

Under the title “Cancellation of the Customs Dollar and its Impact on Prices,” the Shabab of Hizb ut Tahrir / Wilayah Sudan in Gedaref held their weekly address on July 1, 2021 in Rowena King Square, in which Engineer Al-Bashir Ahmed Al-Bashir spoke about the government’s recent abolition of the customs dollar, indicating the motives and consequences of the decision. He also mentioned that the customs dollar is not a banknote, but rather a measure for collecting money for imported goods in the capitalist collection countries.

On the governance crisis as well, entitled: “The Governance Crisis in Sudan and the Issue of Transition,” the Shabab of Hizb ut Tahrir / Wilayah Sudan in Kosti locality held a political address on July 2, 2021 in Rabik Market, the intersection of the railway with 50th Street, in which Ustaadh Musa Abkar Adam spoke, explaining that since the exit of the British colonizer from this country, the people of Sudan have not enjoyed political stability at all, and they have been living in a political crisis to this day. Sometimes civilians are supported by European embassies, and sometimes military ones are supported by the American embassy, and no one has been able to solve a single problem.

Under the title: “By doubling fuel prices, the transitional government is turning people’s lives into hell. Where is our local oil production?” On July 6, 2021, the Shabab of Hizb ut Tahrir / Wilayah Sudan held a political address at the bus station and square in the Grand Market, in which Ustaadh Sowar spoke, explaining that the transitional government is implementing the instructions of the International Monetary Fund and is working to reduce the value of the pound, so it doubled fuel prices, which led to an increase in the prices of goods and services, unemployment spread and rampant thefts and looting in broad daylight, and people’s lives became an unbearable hell.

Under this heading: “Is Sudan going through a crisis?” on July 8, 2021, the Shabab of Hizb ut Tahrir / Wilayah Sudan held a political address in the Souq Libya, in which Ustaadh Ishaq Muhammad Hussein, who began his speech by asking this question to the public, and if the answer is yes, what are the reasons and what are the solutions?

The political address to the Shabab of Hizb ut Tahrir / Wilayah Sudan in Kosti locality, entitled: “The Basis of Education in the Khilafah State,” came on July 9, 2021 in Rabik market, the railway intersection with 50th Street, in which Ustaadh Faisal Madani spoke about the foundations of education in the Khilafah State, especially the Islamic faith; i.e. the Islamic Aqeedah is the basis of education and the curricula.

“There is no real change except with the system of Islam,” on this subject, the Shabab of Hizb ut Tahrir / Wilayah Sudan held their weekly political address in Gedaref on July 8, 2021, next to the position of the King Rowena Square. It happened recently in Islamic countries, or the so-called Arab Spring, including what happened in Sudan, where people came out seeking change.

The people’s interaction with these conversations was excellent, and they participated in the interventions, comments and questions that express the aspirations of this Ummah, its love for Islam, its longing to rule by Islam and its rejection of anything else. 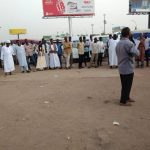 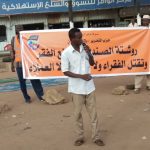 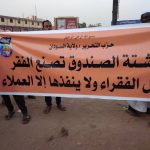 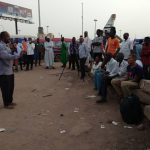 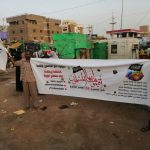 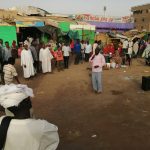 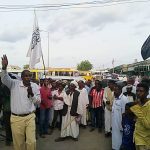 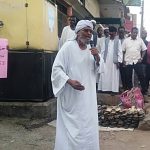 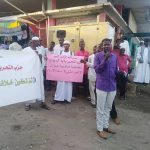