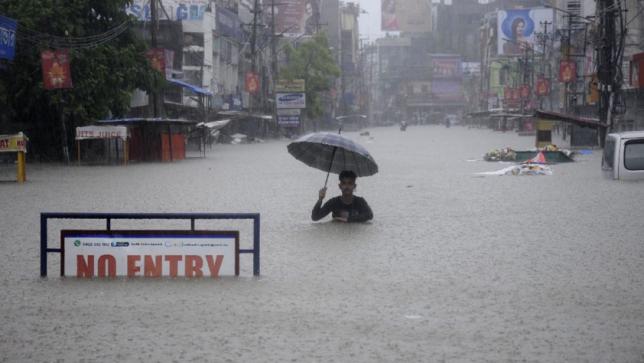 The monsoon season has arrived once again in South Asia, but the people are no more prepared than they were a year ago. Recent reports show that over 41 million people have been severely affected by flooding in India, Bangladesh and Nepal – with more than 1,200 dead and hundreds of thousands of homes destroyed. In Bangladesh alone, more than 640,500 homes have been washed away and 106,000 people are currently in emergency shelters. In addition to this, 13,000 cases of waterborne diseases in Bangladesh alone have been linked to the recent flooding, including diarrhea, skin diseases, acute respiratory and eye infections – with similar figures being reported across South Asia. Despite this recurring issue, little has been done to mitigate the effects of flooding or to prevent them altogether.

There are three factors that cause urban-flooding; meteorological, hydrological and human. Although the first two are impossible to control, failure in the last cause is what truly exacerbates the problem of flooding. In fact, most regions within South Asia have similarly flawed drainage systems, hence their common fate. For instance, Mumbai’s drainage is a network of surface and underground drains that discharge any surface run-off into the city’s creeks, rivers and or directly into the Arabian Sea. However, as most drainage routes often lead to destinations that are clogged by solid waste and or plastic, flooding becomes inevitable. This is a consistent theme across South Asia, in which those in authority have generally shown pure neglect towards long-term preparation against a season that threatens people annually – weather that be adjusting drainage and sewage networks to improve the flow of water or by simply clearing waste from exits.

So one cannot simply defer this to nature; as it is clear that governments have utterly failed in their duty to their people. In fact, it is their ineptitude and ignorance that have cost the lives of thousands. For instance, although Bangladesh is well known to be prone to flooding due to it being situated on the Ganges Delta, it has consistently sustained embankment failure by way of poor planning, design, construction, operation and maintenance, making the effects of flooding that much worse – and even in the face of these issues, little has been done to rectify the problem.

Technical work needs to be done within the region, given South Asia is generally predisposed to flooding relative to other regions. In regard to those policies that would aid the people in dealing with flooding, governments need to improve flood warning systems as they simply do not exist within the country despite it being a recurrent phenomenon. Had the people been better prepared, they would adjust their expectations and planned accordingly. As for more preemptive policies, governments should assist in modifying homes and business which are located in high-risk flooding areas, whether that be by waterproofing homes to moving electrical outputs higher up in houses. It is also vital that buildings are not crammed into lower lying plains but above flood level, so as to prevent flood damage. This would require high levels of government expenditure on flood defences, but would ultimately make a return in the long-run.

Wetlands are also extremely useful to South Asia, as they are able to soak up a lot of the flooded water in order to protect mainland territory, and it is most imperative that the government actively seeks to protect them from destruction, often to make room for agriculture and development. Government would also protect its people by restoring river flow to their natural course. Many have been straightened and or modified to improve navigability but re-meandering may prove useful in stunting high velocity water flow. In addition to this, water storages areas (flood reservoirs) are an extremely useful method to halt floods in their course – particularly in areas where the space exists. Finally, governments ought to also improve both temporary and permanent flood barriers, so as to raise the level of protection.

These are only some methods to eliminate the effects of flooding and may vary from region to region, but what is clear is that few are being implemented within the region. Corrupted governments have failed in this regard and the system they operate in has no interest in a project that would make little monetary return. It is only the Islamic ideology that truly emphasises the protection of man from the perils of flooding by the one who rules over him (Caliph). Lest we forget the apt hadith;

It is therefore crucial, that the countries of South Asia return to their former (Islamic) state, so as to facilitate their transition from a region that is extremely flood-prone to one that is completely protected and prepared against the onslaught of flooding and those harmful effects that travel with it.