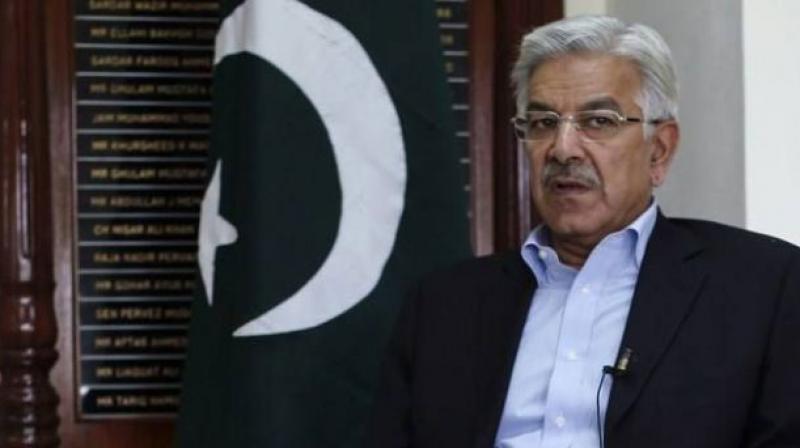 Foreign Minister Khawaja Mohammad Asif said on Monday that Pakistan had suspended talks and bilateral visits with the United States as a mark of protest over the recent anti-Pakistan diatribe by US President Donald Trump.

Sources quoted the minister as telling the Senate, which converted itself into a committee prior to its regular session that Pakistan had taken the fiery remarks seriously. (Source: Dawn News 29/08/2017)

The fall out of US President Trump’s speech on the US policy in South Asia resulted in diplomatic protests and street protests in major cities from both Islamic and political parties. Government and opposition parties took deep offense at the remarks.

As Trump blamed Pakistan, “We have been paying Pakistan billions and billions of dollars, at the same time they are housing the very terrorists that we are fighting.” He also warned, “No partnership can survive a country’s harbouring of militants and terrorists who target U.S. service members and officials. It is time for Pakistan to demonstrate its commitment to civilization, order, and to peace” The response on the whole from supporters of Pakistan and Pakistani politicians was to list all the services Pakistan has made and blame the Afghans.

Interior Minister Ahsan Iqbal defended Pakistan’s policy, “Pakistan is fully committed to rooting out terrorism and no other country can match us in terms of the number of sacrifices made in the war on terror.”

Separately, Foreign Minister Khawaja Asif said the US should refrain from blaming its 16 years of failures in Afghanistan on Pakistan. “America used Pakistan as its ally, but Pakistan suffered unbearable losses in the war on terror. If the US doesn’t trust Pakistan, it should make preparations to repatriate the Afghan refugees Pakistan has been hosting for nearly 35 years,”

Mr Asif also added, “We want to clear misunderstandings with the US by maintaining this relationship.” And he claimed that over 90 percent of the attacks in Pakistan were carried out from Afghanistan and went on to demand US assistance in installing a border fence.

The response of a strong ideological state would be very telling and clear. Pakistan is unfortunately a colonized land and the rulers have a completely colonized state of thinking. They fail to utilize any political or strategic opportunity- they cannot even see it! Allying with America in the war on terror has caused years of immense insecurity, and political suicide. Sell your soul to the devil and you accept his superiority and get nothing in return!

Pakistan’s assistance to American foreign policy failure in Afghanistan has always been criticized but Trump’s lack of subtlety has just put it in the spot light. Pakistan has alienated the Afghan goodwill, built during the Soviet occupation, through its short-sightedness. India has gained strategic advantage and America’s own failure is masked, as its involvement in Afghanistan is lasting far too long and an embarrassing failure. As a result, Pakistan has undermined its role in the region and finds itself today at the receiving end of Afghan resentment, Indian hostility and US pressure.

The response of the politicians and the Army across the board fails to give any real hope for change- just some venting of anger, trying to prove one’s innocence and highlighting loyal servitude. This is the time to rise up to a greater challenge. Pakistan does not need the US, Pakistan needs a system overhaul, where Allah (swt) rule will be established through the re-establishment of the Khilafah (Caliphate) on the method of Prophethood. Then the true ties of brotherhood with Afghanistan will be restored and America and India ejected from the region as “Harbi” states that do not want peace but only cause fitna.  The Khilafah alone will ensure stability and prosperity both regionally and globally.