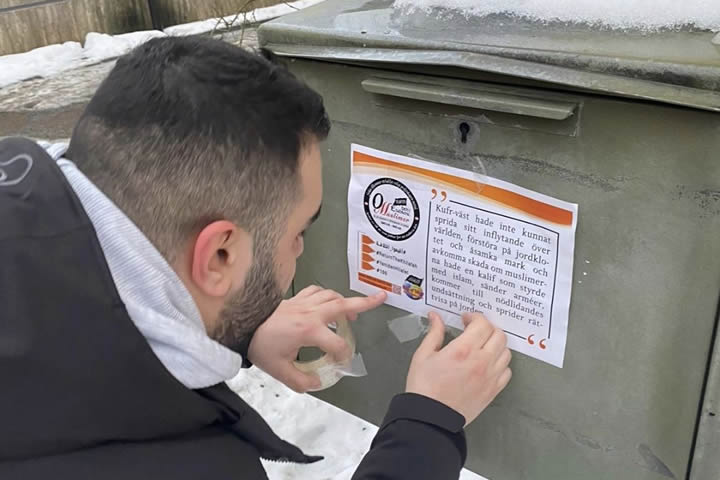 The Sweden Democrats Party and the Swedish Liberal Party accuse Hizb ut Tahrir of trying to overthrow democracy by its activities in the global campaign it launched under the title: “Upon the Centenary of the Destruction of the Khilafah… O Muslims, Establish It”.

Comment:
During this campaign and after the Shabab of the Hizb distributed and published some posters calling on Muslims of all spectrums to remember that they are part of a great Ummah that yearns to restore its glory and honor by restoring the Islamic Khilafah (Caliphate) to the existence in the Muslim countries, the Liberal Party on 24/02/2021 raised a book to the Swedish Interior about Hizb ut Tahrir and what the Ministry of the Interior intends to do regarding its anti-democracy and anti-Semitic activities in Sweden.

The Sweden Democrats extremist party called for preventing any support from the municipalities for Hizb ut Tahrir and its activities.

In this regard, some important points need to be clarified:

1. Hizb ut Tahrir has been internationally known since its founding in 1953 to this day that it never uses material (physical nor violent) work in its approach, but rather it is a political and only political party.

2. The Hizb does not intend to bring down democracy in Sweden. And what was said about it is a lie and fabrication.

3. The Hizb is not against Judaism. Rather, it is against the Jews who occupy Palestine, and anyone who says otherwise about the party is a liar and a fabricator.

4. The Hizb does not receive any support at all from any municipality in Sweden. On the contrary, the Shabab of the Hizb cannot rent a place or operate a mosque, or rent a place to conduct an activity such as a lecture or something else … and whoever says otherwise about the Hizb is a liar and fabricator.

Hizb ut Tahrir is globally-famous and well-known party, and all that is said about it and its approach in Sweden by the two parties: the Swedish Democrats and the Liberals, is a lie and a fabrication.