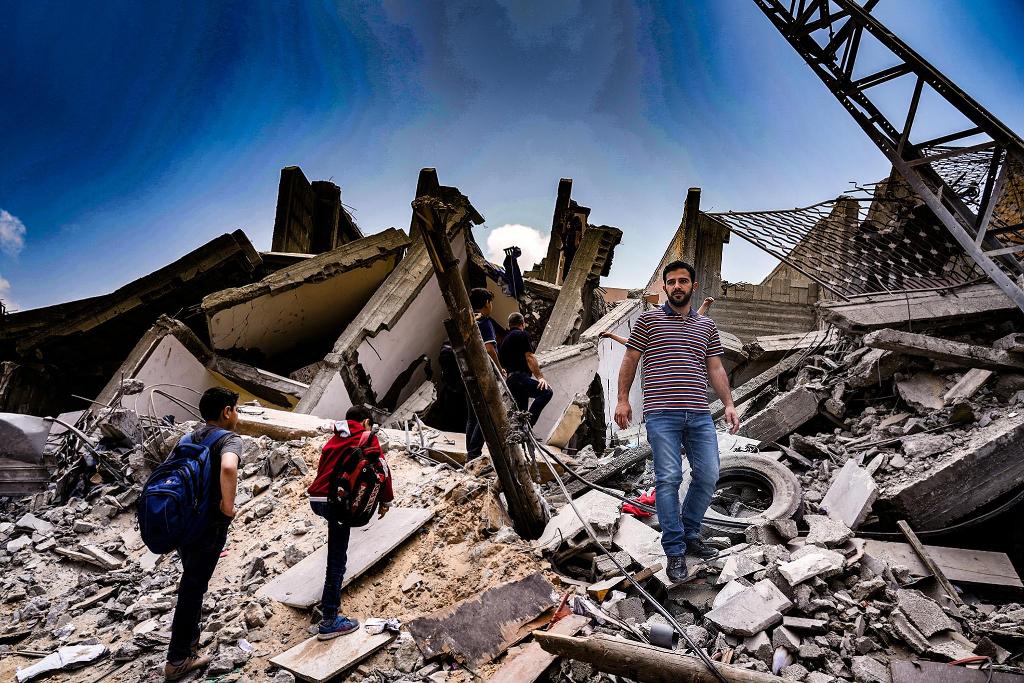 The crimes of the Jewish entity against the Blessed Land and its people have never stopped as the Blessed Land is ravaged with their crimes, day and night, in al-Aqsa Mosque, in Gaza, on the checkpoints, killing, arresting, demolishing houses, confiscating land and desecrating the sanctities. The assassination of martyr Bahaa Abu al-Atta in Gaza was preceded with the assassination of Martyr Omar al-Badawi from al-Aroub Refugee Camp by one day, and before him, thousands of people of Palestine were killed. The killing and destruction machine continues, and the assassination teams roam the Muslim countries, killing our sons in Damascus, Beirut, Amman, Tunisia, Egypt, Iraq and the United Arab Emirates, and killing with them thousands of martyrs from Egypt, Iraq, Syria, Lebanon and Jordan. And what is happening now in Gaza is not much different from what happened in 2014, 2012, 2008, 2006, 2002, 1982, 1967 or 1948 … and the list goes on, and the crimes of the occupation are non-stop around the clock but rather every second.

The Jewish entity would not have dared to intimidate the people of Palestine, and send messages of threat and intimidation with all arrogance and haughtiness had it not been for the depth of the betrayal reached by the regimes in the Muslim countries, as it sees the rulers to be deplorable brokers, who only mobilize for them and to protect their security, and witnesses resonant speeches and media outbursts above the table, and handshakes and security coordination from underneath. So, it was natural for it to indulge in killing us, and then considers our blood as a tool used to manage its internal crises, and to achieve personal and partisan gains.

The blood of Muslims is one, and there is no difference between a leader and an individual, and your blood joins the blood of your brothers and sisters in Syria, Iraq, Egypt, Burma, Turkestan and the rest of the Muslim countries. Here, it is shed at the hand of the Jewish entity with the silence and collusion of the criminal rulers, and there, the bloodshed is at the hand of the colonist Kaffir directly or through the agent rulers and at the behest of the Kaffir West, the enemy of Islam, who conducts a war on Islam and Muslims in different parts and with various tools, and the effective tool is the betrayal of the rulers and their complicity with the enemies of Islam.

The way to lift this humiliation and stop the bloodshed of Muslims in all parts of the world is one and there is no other way, which is the establishment of the Khilafah Rashida (Righteous Caliphate) state on the method of the Prophethood that establishes the Deen, unites Muslims and mobilizes the Muslim armies for Jihad for the sake of Allah, liberating the country from the abomination of the usurpers and spreading the good in the worlds.

O Sincere People, O Factions, Observe Allah in your Deen and your Ummah, proclaim the Truth, stand a position that satisfies your Lord, reject the dirty money, and do not try experiments, then you will regret. Discard the traitorous Muslim rulers, the tools of colonialism. They are defiantly disobedient oppressors, not ruling by what Allah has revealed, not fighting Jihad for the sake of Allah, and are loyal to the disbelievers without the believers. There is no difference between the rulers of Egypt and Iran, the rulers of Qatar and Syria, and the rulers of Jordan and Turkey; they are all allies to the West, the enemies of the Ummah.

There is no way to liberate Palestine except by mobilizing the Islamic Ummah and its armies to establish the Khilafah and liberate the Blessed Land. So, raise your appeal to your Ummah and its armies to support Islam and liberate the country, and do not incline to the disbelievers or the traitorous rulers, and cut all your links with them, for they are the enemy. The Almighty said: وَلَا تَرْكَنُوا إِلَى الَّذِينَ ظَلَمُوا فَتَمَسَّكُمُ النَّارُ وَمَا لَكُمْ مِنْ دُونِ اللَّهِ مِنْ أَوْلِيَاءَ ثُمَّ لَا تُنْصَرُونَ “And do not incline toward those who do wrong, lest you be touched by the Fire, and you would not have other than Allah any protectors; then you would not be helped.” [Hud: 113].

And trust in Allah Almighty, He is your Lord, your protector; and excellent is the protector, and excellent is the helper. The Almighty said: يا أَيُّهَا النَّبِيُّ حَسْبُكَ اللَّهُ وَمَنِ اتَّبَعَكَ مِنَ الْمُؤْمِنِينَ “O Prophet! Allah is sufficient for you and for the believers who follow you.” [Al-Anfal: 64[… O Allah, deliver this goodness to the Muslims and expand their breasts with assurance to it, and grant us from Yourself a supporting authority… Praise be to Allah, the Lord of the Worlds.