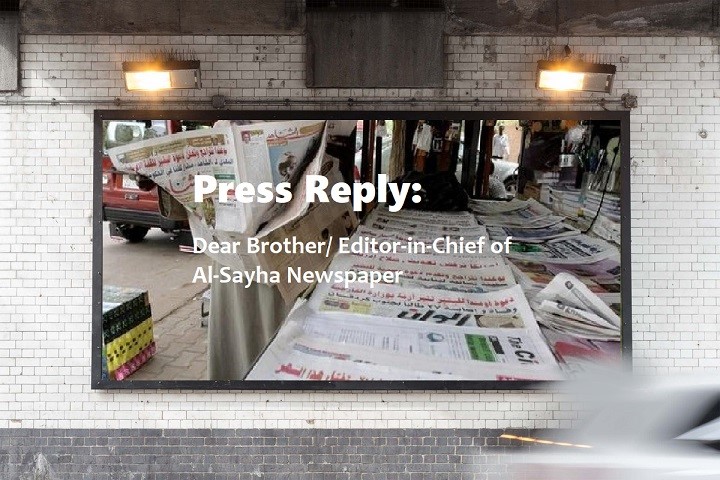 Subject: A response to the author of an article: “Political Islam… The Diaries of Gunpowder and Blood”

We reviewed an article by the writer Ahmed Musa Qurei’i entitled “Political Islam… Diaries of Gunpowder and Blood” in your newspaper Al-Sayha Issue 2411 dated 10/20/2021, in which he bombarded it with accusations, and even insults against Islamic groups, and his hidden hatred has not only appeared towards these parties and movements but rather, his hatred towards the great Islam is among the folds of his article, such as when he was saying, “In my conviction there is only one motive that is the reason behind this “Islamic misfortune,” this motive is the glory of the ancient Islam” The glory of Islam is according to the writer “misfortune”, and La Hawla Wala Quwwata Illa Billah (there is no power or strength except with Allah)!

The writer mentioned Hizb ut Tahrir amongst the other Islamic groups and said, “These groups differ in visions, ideas, trends and extremism, each according to his intellectual strength, source of funding, and methods of “deceit and villainy”. Some of them are not satisfied with their dreams, such as Hizb ut Tahrir, which seeks to establish a global Khilafah (Caliphate) upon the method of the Prophethood…

In accordance with our right to respond, we kindly request you to publish the following response to the author:

First: The writer said: “The term political Islam appeared to describe Islamic movements that believe that Islam is not only a religion, but a political, social, legal and economic system that is suitable for governance and building state institutions, but what are the reasons and motives that led to the emergence of this notorious term… We say in response to this, Islam is a complete religion that was brought by the Prophet Muhammad, peace be upon him, to organize human life, whether it is political, economical, social or other, and this is known from the religion by necessity, except for those whose eyes are blinded by the Kuffar of the colonialist West, and their insights are blurred by following the whims of the unbelievers, Allah Almighty says:

“Today, I have perfected your religion for you, and have completed My blessing upon you, and chosen Islam as Dīn (religion and a way of life) for you. But whoever is compelled by extreme hunger, having no inclination towards sin, then Allah is Most-Forgiving, Very-Merciful.” [TMQ 5:3]. And He (swt) also says:

“and We have revealed to you the Book, an exposition of everything, and guidance, and mercy, and glad tidings for the Muslims.” [TMQ 16:89].

Moreover, the beloved Mustafa established a state on the basis of Islam with the ideas of the great Revelation. It was a source of a distinct civilization, which enemies witnessed before friends. It was the state of Islam that lasted for more than thirteen centuries. The first state in regards to civilization, culture and politics, and it continued until it was overthrown by the colonial Kuffar with the help of the traitors of the Arabs and the Turks.

Second: Hizb ut Tahrir, which seeks to resume the Islamic way of life by establishing the second Khilafah Rashidah (Rightly-guided Caliphate) upon the method of the Prophethood, does not undertake this work as a dream, as the writer claimed, but rather performs it as a legal obligation, which the Ummah must perform, otherwise it will be sinful, because Islam has specified the system of governance imposed by the Lord of the worlds, and it is the system of Khilafah (Caliphate) in which a Khaleef (Caliph) is appointed by allegiance to the Book of Allah Almighty and the Sunnah of His Messenger to rule by what Allah has revealed.

“So, judge between them according to what Allah has sent down, and do not follow their desires against the truth that has come to you.” [TMQ 5:48]

And the Messenger of Allah (pbuh) said: «مَنْ خَلَعَ يَداً مِنْ طَاعَةٍ لَقِيَ اللَّهَ يَوْمَ الْقِيَامَةِ لَا حُجَّةَ لَهُ، وَمَنْ مَاتَ وَلَيْسَ فِي عُنُقِهِ بَيْعَةٌ مَاتَ مِيتَةً جَاهِلِيَّةً» “He who throws off obedience will meet Allah on the day of resurrection without possessing any plea, and he who dies without having taken an oath of allegiance will die like a pagan” [Narrated by Muslim].

The Messenger (saw) specified that the matter after him is a Khilafah (Caliphate), Muslim narrated on the authority of Abu Hazim, he said: I stayed with Abu Hurayrah (ra) for five years, and I heard him narrate on the authority of the Prophet (saw): «كَانَتْ بَنُو إِسْرَائِيلَ تَسُوسُهُمُ الْأَنْبِيَاءُ، كُلَّمَا هَلَكَ نَبِيٌّ خَلَفَهُ نَبِيٌّ، وَإِنَّهُ لَا نَبِيَّ بَعْدِي، وَسَتَكُونُ خُلَفَاءُ فَتَكْثُرُ»، قَالُوا: فَمَا تَأْمُرُنَا؟ قَالَ: «فُوا بِبَيْعَةِ الْأَوَّلِ، فَالْأَوَّلِ، وَأَعْطُوهُمْ حَقَّهُمْ، فَإِنَّ اللهَ سَائِلُهُمْ عَمَّا اسْتَرْعَاهُمْ»“Banu Isra’il were ruled over by the Prophets. When one Prophet died, another succeeded him; but after me there is no prophet and there will be caliphs and they will be quite large in number. His Companions said: What do you order us to do (in case we come to have more than one Caliph)? He said: The one to whom allegiance is sworn first has a supremacy over the others. Concede to them their due rights (i.e. obey them). Allah (swt) (Himself) will question them about the subjects whom He had entrusted to them.”

As for the consensus of the Companions, they, may Allah be pleased with them, unanimously agreed on the necessity of establishing a Khaleef (Caliph) for the Messenger of Allah (pbuh) after his death, and they unanimously agreed on establishing a Khaleef for Abu Bakr, then for Omar, and then for Uthman after the death of each one of them. The confirmation of the unanimity of the Companions to establish a Khaleef appeared from their delay in burying the Messenger of Allah (pbuh) after his death, and their preoccupation with appointing a successor for him for two nights until the appointment of the Khaleef was established, which confirms that the appointment of the Khaleef is far more obligatory than the burial of the dead. This consensus was clear and strong evidence of the obligation to appoint a Khaleef.

Third: As for the words that the writer wrote that are not appropriate for a Muslim, but rather indicate his inability to produce arguments and evidence for the sincerity of his speech, so we will not respond to them in compliance with the hadith of the Messenger (saw): «لَيْسَ الْمُؤْمِنُ بِطَعَّانٍ وَلَا بِلَعَّانٍ وَلَا الْفَاحِشِ الْبَذِيءِ»“The believer is not a slanderer, nor does he curse others, and nor is he immoral or shameless.”

In conclusion, we say to the writer, that you are a Muslim, and the origin of the Muslim is that he strives for the glory of Islam and the exaltation of Muslims and their revival for Islam and Muslims. And if there are mistakes here or there, we treat them with wisdom and good advice, and argue in a way that is better, so that we do not help Satan against our brothers, and so that we are not on the side of the unbelievers who plot against Islam and Muslims.

We ask Allah to guide us to tell the truth and have the correct of opinion.