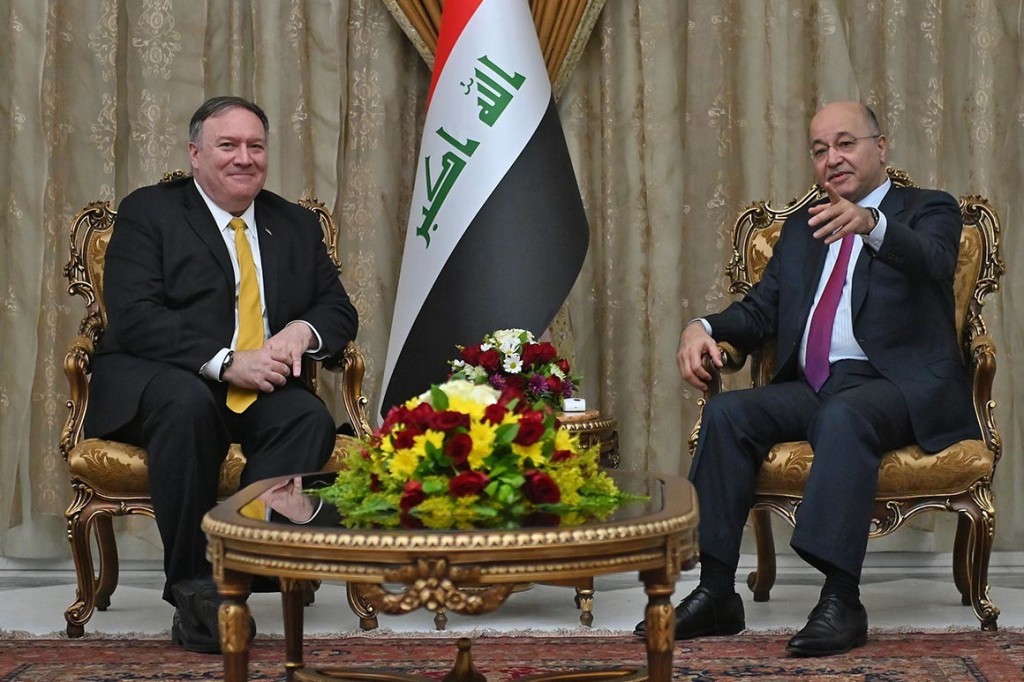 US Secretary of State Michael Pompeo made an unexpected visit to Iraq, during which he met with the presidents of the Republic and the ministers, Barham Saleh and Adel Abdul Mahdi, while an official source confirmed that the visit is part of the US warnings to Iraq of remaining non-neutral with regard to the escalation between Washington and Tehran.

Pompeo said while leaving Iraq “we wanted to let them to know about the increased threat stream that we had seen and give them a little bit more background on that, so they would have enough information that they could ensure that they were doing all that they could to provide protection for our team. We don’t want anyone interfering in their country, certainly not by attacking another nation inside of Iraq” asserting that “there was complete agreement across that.”

The US Secretary of State talks about Iran’s negative role in Iraq and its continuing threats to US forces in Iraq as if America is innocent of it, or as if Iran took control of Iraq against America’s will and that it did not draw the role assigned to it. The US Secretary of State is deceitful in his words, and he wants to acquit his country, even though it came and occupied Iraq, and it was the one who put the Iranian men in power and in the army and supported its militias and so on. When America occupied Iraq, it encountered resistance that it did not expect, so it brought in Iran to Iraq to help it stand against the resistance and to confront it, and to give legitimacy to the occupation and the regime that it has established there, especially after 2005 when America allowed the coalition of the pro-Iranian parties to come to power under the leadership of Ibrahim al-Jaafari and then al-Maliki. These governments were founded by America and are associated with it. And the Maliki government, backed by Iran signed security and strategic agreements with America to maintain its influence following the official termination of its occupation of Iraq, which indicates America’s satisfaction with the role of Iran, whose officials admitted their cooperation with the United States in its occupation of Iraq and in working to ensure the stability of its influence in it.

Thus, the Iranian role in the region is a well-studied U.S. policy, and this role expands and shrinks according to the requirements of US policy pursuant to the circumstances. Since 1979, America has maintained Iran as a “revolutionary Islamic cover” against the countries of the region, and then it expanded to a “severe sectarian threat” after the neo-conservatives took power in America, then it became a “pivotal regional role” in the circumstances of the Arab Spring. But when some of America’s other agents such as Egypt recovered, or the rule returned to be in its hand as in Saudi Arabia, or it became possible to use it as Turkey, America is finding other roles alongside the Iranian role but without giving it up.

We remind of these things so that Muslims are aware that the real enemy of the Islamic Ummah is the colonizer Kafir Western countries because they have the actual influence in the Muslim countries, despite some manifestations of influence for the regional countries, and that the Western countries are the policy makers in our country, while the Muslims rulers are tools in the hands of those countries implementing their policies. And therefore, the work should be focused on liberating our country from the influence of the colonial Kafir by overthrowing the agent rulers of the West and giving allegiance (Bayah) to a Khilafah to implement the provisions of Islam in the Khilafah Rashidah (righteous Caliphate) State. And that the issue should not be overthrowing the current rulers only and then Muslims become tricked into replacing one agent with another agent, as happened in Tunisia and Egypt, and as they are also trying to implement in Libya, Ash-Sham, Sudan and Algeria.