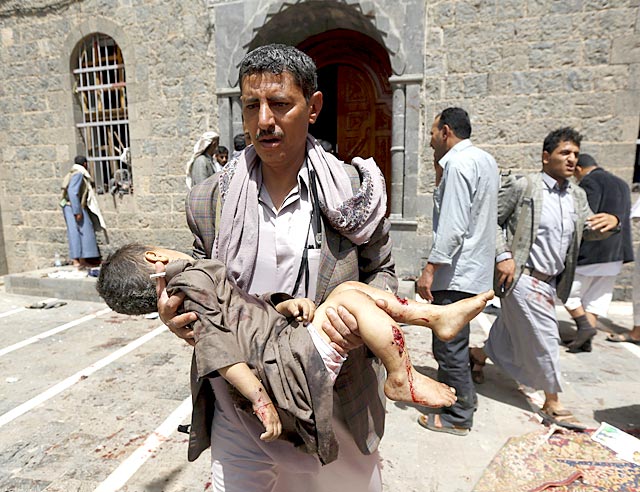 On the 26th April, the United Nations published a report that stated that the death toll in Yemen due to the ongoing conflict is expected to surpass 230,000 by the end of 2019. The study, entitled, “Assessing the Impact of War on Development in Yemen”, also reported that 131,000 Yemenis will have died from the side-effects of the war between 2015 and 2019, such as from hunger, disease and lack of health clinics. According to the UN, by the end of the year, the fighting will have claimed 102,000 lives. Jonathan Moyer, lead author of the report, described the war in Yemen as, “one of the highest-impact internal conflicts since the end of the Cold War.” He also stated that the vast majority of the victims of Yemen’s conflict were children under 5 and that 1 child dies from the war and its side-effects every 12 minutes. Aid groups estimate that as many as 85,000 children have starved to death since 2015 and millions more are one step away from famine.

This Anglo-American is a driven proxy war, fought by their criminal regional and local agents – the regimes of the Saudi-led coalition and the Iranian backed Houthis – to secure their selfish interests in the country and hegemony over its resources. This war has largely decimated the infrastructure and the lives of the people of Yemen and brought death, famine and misery to the people of Yemen and is slowly wiping out the population of Yemen. The children of Yemen are victims of the greed of these amoral conscienceless capitalist states who give no consideration to the disastrous human impact of the political games they play out on foreign lands and nations, willing even to drive a whole population to the brink of famine if it serves their needs. The US has provided billions of dollars of arms to the Saudi-led coalition since the beginning of the war, as well as providing the aerial refueling of jets, reconnaissance, and intelligence information. The UK has also sold nearly $5 billion of arms to Saudi Arabia since 2015, including fighter jets, drones and missiles.

The United Nations meanwhile, is working in Yemen to prolong the war, to gain and trade with the hungry people’s livelihood. It is the one who sounds the alarm day and night that Yemen is on the brink of a catastrophic famine, to attract support and grants under the banner of its suffering, while stealing the aid it collects at donor conferences and then giving it to their UN organizations and other malicious local organizations, which achieve the agendas of America in Yemen. Most of those funds go to recruit employees of these organizations to brainwash them morally and intellectually through dollars and attractive high salaries, thus exploiting the deteriorating economic situation in the country.

How can the United Nations be trusted, when since the outbreak of the war in Yemen, it has received more than $8 billion in funds from donor conferences for Yemen? It has given funds to dozens of its agencies, but the people of Yemen continue to suffer from poverty, famine and disease. The organizations or the United Nations did not solve any problem. Rather, it brings crises and hardships and makes billions of dollars from the suffering of the people and in return it gives them crumbs and crumbs only.

After considering all this, we ask, how any sound-minded individual can believe that the instigators, financers, fuelers and idle spectators of this horrific war will ever act as sincere peace-brokers to end the genocide against the Muslim children of Yemen or act in their best interests? Whether it is the UN sponsored ‘peace-process’ or the so-called ‘peace-talks’ in London on the 26th April between the British foreign secretary, and representatives of the US, Saudi Arabia, the UAE and the UN – it will never bring any genuine good for the Muslims of Yemen. They are like wolves fighting over the carcasses of their prey. Indeed, Allah (swt) says, وَإِذَا قِيلَ لَهُمْ لاَ تُفْسِدُواْ فِي الأَرْضِ قَالُواْ إِنَّمَا نَحْنُ مُصْلِحُونَ * أَلا إِنَّهُمْ هُمُ الْمُفْسِدُونَ وَلَـكِن لاَّ يَشْعُرُونَ “And when it is said to them, do not make mischief in the land, they say: we are but peace-makers. Now surely they themselves are the mischief makers, but they do not perceive.” [Al-Baqara: 11-12]

O Muslims of Yemen! Give your support to the urgent establishment of the true Islamic leadership, the Khilafah (Caliphate) based on the method of the Prophethood which is the only means to end this genocide against your children and families and uproot any colonial interference in your land. It will unite the hearts of the Muslims of Yemen upon the Islamic Aqeeda and the sublime Laws of Allah (swt), and ensure every citizen under its rule is provided for, protected, and enjoys a first-class education and healthcare system without discrimination, returning the description of ‘Happy Yemen’ to your land.