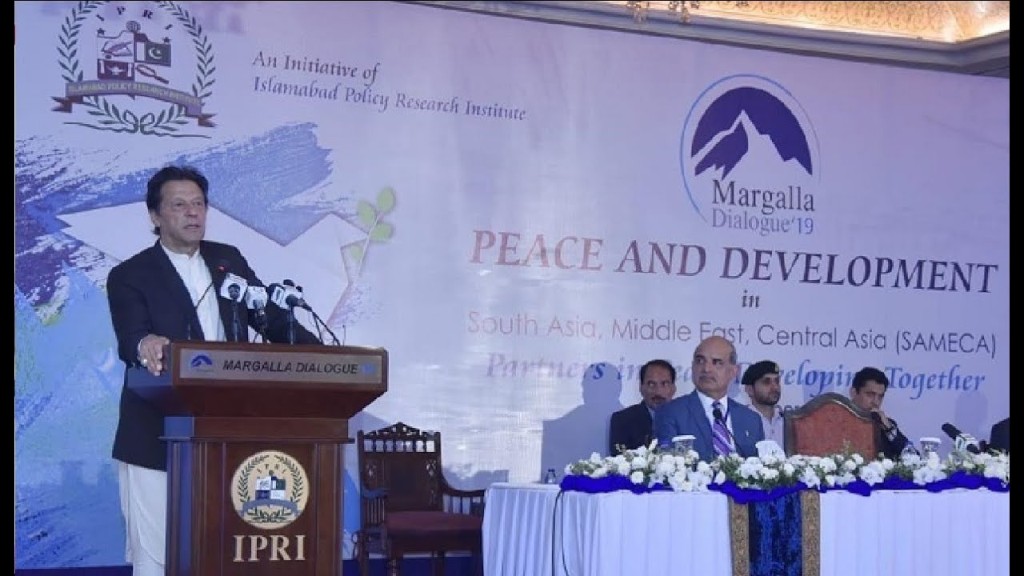 Pakistan’s Prime Minister, Imran Khan, has called for regional peace, stressing that friendly relations between India and Pakistan are vital for peace in South Asia. “Rather than fighting each other, together we [Pakistan and India] can fight poverty, challenges of climate change and hunger,” the prime minister said while addressing the concluding session of Margalla Dialogue 2019 on “Peace and development in South Asia, Middle East and Central Asia” on 15th November 2019. He warned the international community that a serious situation was developing in the region because of Indian aggression, whilst adding that, “This is the time that the international community should step in; otherwise the consequences will affect the entire world.”

The government of Pakistan Tehreek-e-Insaf (PTI “Pakistan Justice Movement), led by Imran Khan, has been strongly pursuing normalization of relations with India, ever since it took power in August 2018. In stark contrast, the Modi regime in India has not shown a single gesture of restraint, neither in its relentless policy of oppression in Occupied Kashmir, nor in its continuous aggression against the Muslims of Azad (Liberated) Kashmir across the Line of Control and Working Boundary. India attacked Pakistan on 26th February 2019 by sending its fighter jets over Balakot within Pakistan, bombing an alleged mujahideen camp. On 5th August 2019, the Modi regime announced the forceful annexation of occupied Kashmir with India, by abrogating article 370 of the Indian constitution, which had granted a special status to Kashmir, with some degree of autonomy.

Despite India’s continuous hostile posturing, the Bajwa-Imran regime made concession after concession to please India. On 9th November 2019, the regime opened Kartarpur corridor to facilitate Indian Sikhs in visiting their holy site. The regime is trying to falsely claiming that normalization is the only way forward for economic progress and security in the region. The Bajwa-Imran regime is claiming that it is doing so to project itself globally as the sane voice in the region, to expose Modi’s belligerence. However, in its blind obedience to Trump, the Bajwa-Imran regime is appeasing the aggressor, which only encourages the aggressor in further aggression, as is clear in the last seven decades. In Islam, there is no permanent peace with any kafir state. Moreover, how can we rest in peace, whilst our brothers and sisters are butchered by the Hindu State in Kashmir? How can we rest easy, whilst millions of Indians live in awful poverty in the capitalist state?

Islam is ensures justice, security and prosperity for all of humanity, not only for Muslims. The region cannot have economic prosperity unless capitalist economic system is abandoned and replaced with the economic system of Islam. The hunger and poverty prevailing throughout the region are the bitter fruits of capitalist economic system. Capitalism has created extremes of wealth inequality, constantly widening the gulf between the rich and poor all over the world. According to a study released by the rights group Oxfam in 2017, India’s richest 1% hold a huge 58% of the country’s total wealth, indicating a huge concentration of wealth. It is higher than the global figure of about 50%. 57 billionaires in India have same wealth ($216 billion) as that of the bottom 70% population of the country.

The Indian Subcontinent only experienced peace and prosperity when it was ruled by all that Allah (swt) has revealed, which turned India into the economic engine of the world. Under Islamic rule, all communities in the Indian Subcontinent lived peacefully, with the regional GDP rising to 23 percent of the global GDP. When the system and form of governance changed, the region was plunged into calamity. The British Raj regime implemented the oppressive system of capitalism, as have all the successive regimes in Pakistan, after its creation in 1947. Islam’s dominance through the Khilafah (Caliphate) on the Method of Prophethood alone can end the oppression, injustice and poverty of the capitalist system. Allah (swt) said,  وَقَاتِلُوهُمْ حَتَّى لاَ تَكُونَ فِتْنَةٌ وَيَكُونَ الدِّينُ لِلّهِ “Keep fighting against them (disbelievers) until mischief ends and the way prescribed by Allah prevails.” [Surah Al-Baqarah 2:193].