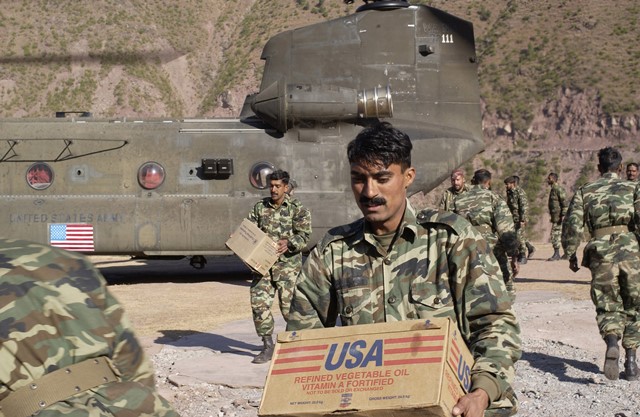 “The strengthening of brotherly ties with the Islamic countries will be a central pillar of our foreign policy.” –General Musharraf 1999

Lately, two decisions have come to characterize all that is wrong with Pakistan’s foreign policy, especially when it comes to relations with the Muslim world. The first is Pakistan’s decision to send troops at the behest of Saudi Arabia to guarantee the country’s territorial integrity and to deploy soldiers in a possible ground invasion of Yemen. A statement from Prime Minister Nawaz Sharif’s office said, “Pakistan remains firmly committed to supporting the sovereignty and territorial integrity of Saudi Arabia in accordance with the aspirations of the people of Pakistan.” It is more likely, Pakistan along with other Arab nations will attempt to restore the rule of Hadi and proceed to implement the 2011 GCC plan for Yemen that was prepared under the tutelage of America and Britain.

The scope of Pakistan’s involvement is the subject of much debate and appears to be open-ended encompassing the whole of the Middle East. The same statement read: “Pakistan stands committed to playing a meaningful role in arresting the deteriorating situation in the Middle East.” This potentially opens up the possibility of Pakistan intervening in other conflict zones, where rebels mostly of Islamic flavor are fighting Assad’s government in Syria as well as the government in Iraq. The West along with the GCC views Islamic rebels as a threat to the current political order and they do not distinguish between the despotic ISIS group and the genuine Islamic opposition fighting Assad or peaceful Islamists opposed to tyrannical regimes in the region. All must fought and eliminated.

Further, afield, it is not difficult to see Pakistan being dragged into other military encounters, where Islamic rebels opposed to the secular political order imposed by the West have taken up arms against their governments such as in Libya and Somalia.

What is common in all of these conflicts are the autocratic governments supported by Western money and arms that for years have not only usurped the rights of the people but have also brutally oppressed them. America and Europe after suffering humiliating defeats in Iraq and Afghanistan are in no mood to send further troops to quell Islamic led insurrections against the political order they fashioned, which is swiftly unravelling now. Subsequently, the West has exploited the ferocity of the Islamic rebellion in these countries —in particular the obnoxious tactics of ISIS and other affiliates—to cajole Arab nations and other Islamic countries to commit troops to defend the existing political order and by proxy western interests. The Pakistani leadership unable to fathom West’s latest plan has taken the grave step of being part of the Saudi led coalition that will work under western auspices to safeguard western interests.

In this way, those Arab populations that had hitherto respected Pakistan will see the Pakistani army and state as legitimate targets. Yemen’s population is the first to turn against Pakistan. Who’s next?

The second decision that is bound to have lasting repercussions against Pakistan is the recent announcement that Pakistan will sell fighter jets to Myanmar that no doubt will be used to exterminate the country’s Rohingyan Muslim population. The government of Myanmar is complicit in the genocide of Rohingyan Muslims, but that does not matter to the political and military rulers of Pakistan. On the contrary, Pakistan’s long history of supporting non-Muslim countries brutally suppressing their Muslim citizens runs counter to the brotherly ties professed by Pakistani officials in public. For instance, Russia’s suppression of Chechens, China’s vicious oppression of Xinjiang Muslims and the heavy-handedness of Philippines against Muslims is repeatedly met with silence in official circles. Even the venom of the Indian security forces towards Kashmiri Muslims no longer generates any meaningful response from Pakistan’s rulers who now covet peace with Pakistan’s arch enemy. Again, all of this underscores that Muslims living in these lands at the very least will hold an unfavorable opinion of the Pakistani state. But the worst— as every Pakistani know all too well— is that many militants from these countries are now fighting the Pakistani army in the tribal areas.

Finally yet importantly, Pakistan will also alienate circa 30 million of its Shia citizens thereby causing further schisms between already a fructuous relationship between the country’s Sunnis and Shias. This clearly violates the oft-repeated mantra of the Pakistani army of staying clear of firqa wariat (sectarian divisions).

Musharraf the chief architect of Pakistan’s present foreign policy successfully laid the basis for a divisive policy that for over a decade has pitted fellow Pakistani brothers against each other, and now is about to turn Muslim masses living in Islamic lands against Pakistan.