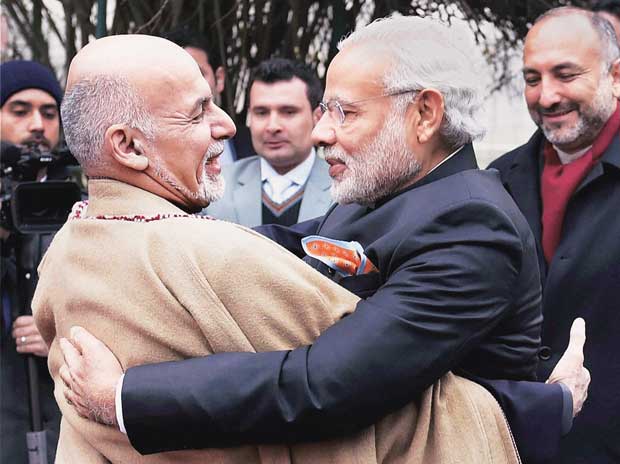 Pakistan and Afghanistan will be part of One State, the Islamic Khilafah

“India has succeeded to penetrate in Kabul, slashing the market share of Pakistan by more than 50 per cent in the last two years”, Chairman Pakistan-Afghanistan Joint Chamber of Commerce and Industry, Zubair Motiwala, told Dawn on 2 March 2018. He said “Pakistan’s trade with Afghanistan fell to $1.2 billion from $2.7bn within in the last two years and the country has been losing even the traditional markets of flour, men and women’s clothes and red meat. India has been providing goods at subsidised rates to capture the market and are providing air tickets with a 75pc rebate”, said Motiwala, adding that Afghans find it easy to travel to India with cheap tickets and free multiple visas without police checks.

Despite the creation of the Durand line by the British Empire, the Muslims living on both sides of the line have never really been divided. The Muslims of Afghanistan had businesses all over Pakistan or were working as labourers because they never felt like strangers in Pakistan. Similarly, Muslims in Pakistan have had strong business dealings in Afghanistan whilst Pakistani skilled workers have worked there without any fear. For the Muslims of this region, Pakistan and Afghanistan are two sides of the same coin and this reality was clear during the Jihad against Soviet Russian occupying forces when Muslims of both sides fought together and defeated USSR, contributing to its collapse and resulting in the independence of the Muslim Central Asian States.

Since the US invasion of Afghanistan, America and its loyal agents in Pakistan and Afghanistan have been actively making efforts to break this special bond between the inhabitants of this region, which emanates purely form the Aqeedah of Islam. Supervised by Washington, the rulers of Afghanistan and Pakistan engaged in a war of words to incite nationalistic feelings and to create enmity between the Muslims. The rulers of Pakistan closed the border repeatedly in the face of Afghan Muslims on the pretext of stopping “terrorists” from entering Pakistan. This repeated closure of borders has made business between the two countries extremely difficult as nobody knows when the border will be closed and how long it will remain close. And all of this has been done while rulers knew that the US was actively working to provide India a foothold in Afghanistan.

So, dwindling trade between the Muslims of Pakistan and Afghanistan is because of the treachery of their rulers. It can only be restored by removing these traitors and establishing Khilafah on the method of Prophethood, which will erase the Durand line. Then the Muslims of both regions will move and do business freely without the need of a visa or any other documentation. Elimination of the Durand line will not only make the Muslims of this region economically better off; they will be much better positioned to make a united stand against the political and security challenges posed the by Kuffar whether US or India. Divided we lose, united we gain. And Allah swt said,

Education Has Been Made a Privilege, not a Right, under Democracy

The Sindh High Court (SHC) on 5 March 2018 barred private schools in the province from slapping on late fee surcharges and additional fees onto existing school fees. The court issued the ruling on a petition against a government notification on a five to ten per cent hike in private school fees in the province. Parents of students belonging to various schools in the province had petitioned the SHC in December 2017 to reverse the government order increasing school fees, saying that school management must not increase fees by more than 5pc in an academic year as per regulations. Moreover, some private schools had increased the fee by more than 10pc. The bench remarked that the hike suggested by the government is illegal and that a policy should be devised to create a legal framework for increasing school fees.

The misery of parents was echoed on the Senate floor last year when the retired Senator, Col Syed Tahir Hussain Mashhadi, said, “The fact is that private educational institutions belong to very powerful personalities due to which no one can take action against them. Education has become a business in the federal capital, and on the other hand, the ministry is not ready to take any action.” He also added, “It is unfortunate that government schools have failed to provide quality education. They lack teachers and facilities due to which people do not want to send their children to government schools. If the ministry improves the quality of education in government schools, people will start admitting their children to government schools.” Education has been privatized and left to the mercy of businessmen, whilst compromising the societal aim of increasing the capability and nurturing the personalities of the next generation. This is the real face of Democracy; the system of neglect, where the state has neglected the right of the people for education.

In Islam, primary and secondary education for every individual is an obligation upon the state. Teaching the individuals what they require in mainstream life is from the essential interests, since it achieves benefit and repels harm. Thus, the Khilafah must provide sufficient primary and secondary schools for all the citizens of the state free of charge. The Messenger made the ransom of the disbelieving prisoners that they should teach ten of the Muslim children, and that was from the war booty which is part of what the Khalifah may spend in the interests of the Muslims, and is evidence that the spending upon education is without anything given in exchange. Therefore, Hizb ut Tahrir adopted in Article 178 of the Introduction of the Constitution that, “It is an obligation upon the State to teach every individual those matters that are necessary for the mainstream of life, male or female, in the primary and secondary levels of education. This must be provided free of charge to everyone, and the State should, to the best of its ability, provide the opportunity for everyone to continue higher education free of charge.”

Pakistan’s Regime Continues to Cripple the Economy, Making it Import Dependent and Drowning in Poverty

On March 5, 2018, the Executive Board of the International Monetary Fund (IMF) concluded the first Post-Program Monitoring Discussions with Pakistan. In its press release of 6 March 2018, entitled, “IMF Executive Board Concludes First Post-Program Monitoring Discussions with Pakistan,” the colonialist financial institution, the IMF, warned that, “Surging imports have led to a widening current account deficit and a significant decline in international reserves despite higher external financing” and mentioned, “the high imports related to the China‑Pakistan Economic Corridor projects.” The report pointed out that the per capita GDP is US$1,463 (2016/17), with a poverty rate of 29.5 percent (2012/13) and unemployment rate of 5.9 percent (2014/15).

Pakistan’s heavy imports are because most of Pakistani industry is made up of textiles and food processing and has an export focus of agricultural produce and products of light industry. Indigenous engine, heavy industrial machinery and construction equipment manufacture are glaring weaknesses. In 2007, eight Pakistani exports stood at $18 billion, the majority of them textiles in industry and cotton in agriculture. Pakistan closed the Financial Year of 2016-17 with a trade deficit of $32.4-billion and as for this year the trade deficit is already $17.97 billion in the July-December period, reported the Pakistan Bureau of Statistics (PBS) on 11 January 2018. The profile of the imports and exports points to a resourceful country crippled by underdeveloped agricultural and industrial sectors. Moreover, within industry, there is a violation of the Shariah rules which deprives the state treasury and increases the concentration of wealth. Islam stipulates that public property includes energy and minerals, such that the public benefits fully from these large resources. However, under the current system, these resources are privatized, allowing a few to profit and benefit, whilst the society is deprived. Islam also stipulates that the joint share company is forbidden. It is the joint share company that has allowed private ownership of capital intensive industry such as large scale construction, heavy industry and telecommunications. In the coming Khilafah, the state will dominate such industry allowing the state to have large resources to look after the affairs of the people.

In its Introduction to the Constitution, Hizb ut Tahrir has adopted Article 74, “The Department of Industry is in charge of all the affairs connected to industry, whether heavy industry such as the manufacturing of engines, machines, vehicles, materials and electrical equipment, or light industry. Similarly, whether the factories are of the public property type or they are included in the private property and have a relationship to the military industry. All types of factories must be established upon the basis of military policy… it is a duty upon the State to manufacture weapons by itself and it is not allowed to depend upon other states, because this allows other states to control it, its will, its weapons and its fighting… This can’t be achieved unless the State possesses heavy industry and started to build factories which produce heavy industry, both military and non-military alike.”