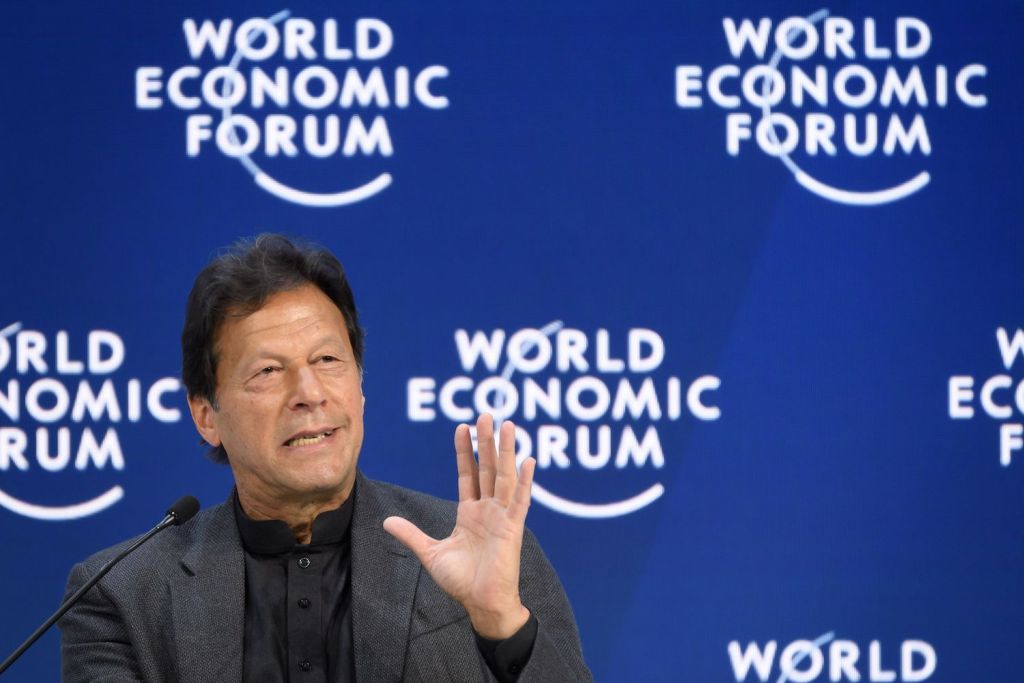 By Requesting the US and the UN to Mediate, the Bajwa-Imran Regime Create the Impression of Pakistan being Weak

On 22 January 2020, during an interview with the International Media Council on the sidelines of the World Economic Forum (WEF) annual meeting, Prime Minister Imran Khan said that United Nations and the United States “must act” to reduce tensions between nuclear-armed rivals, Pakistan and India, from reaching a point of no return. The premier expressed his fear that India might attempt to raise tension at border, in order to divert the world’s attention from domestic protests against recent government measures that have sparked nationwide protests.

The Bajwa-Imran regime is creating an impression that Pakistan is a weak state, by repeatedly asking the UN and US to restrain India from any adventure against Pakistan. The weak stance creates an impression that Pakistan is even weaker than Nepal and Bhutan, being frightened of Indian threats. The regime has lost its mind by requesting the Americans to halt Indian aggression, when the US did not even condemn the Indian attack on Balakot on 26th February 2019. Instead the US showed its support by saying that it was a counter terrorism operation. The attitude of the Bajwa-Imran regime is unacceptable to the Muslims of Pakistan and our brave military. Is Pakistan not a country whose forefathers, despite facing severe hostility and economic exploitation at the hands of British and Hindu nexus, sacrificed thousands of lives to establish the world’s largest Muslim state in 1947? Does Pakistan not have the world’s seventh largest military force, whose brave soldiers strike fear in the hearts of enemies, whether near or far?  Is Pakistan not a country with nuclear and advance missile capability that the Indians, Americans and Jewish entity are fearful of? Is Pakistan not that country which defeated the former Soviet Russia in Afghanistan, by making an armed force of Muslims in the tribal areas and Afghanistan, when she was not even a nuclear power? Despite all this, the Bajwa-Imran regime is presenting a weak stance in front of India by adopting the policy of “restraint,” so the lions of Pakistan’s armed forces and 220 million Muslims of Pakistan submit to the Indian hegemony. The Bajwa-Imran regimes seeks to remove the Muslims as a hurdle for India in its desire to become the dominant regional power.

The Bajwa-Imran regime, in the footsteps of its predecessors, has retreated from confronting India due to its following the US plan of building India as a regional power, which strikes the interests of the Muslims of this region. The armed forces and the Muslims of Pakistan never accepted Indian hegemony, even in the years when Pakistan was not a nuclear power, because they always depended on the support of Allah (swt). The upcoming Khilafah state will adopt an offensive posture against India, letting loose the lions of our armed forces, following the footsteps of Captain Karnal Sher Khan. They are fully capable of liberating Kashmir from Indian occupation, offering Salah in the grand Masjid of Srinagar, while raising the flag of the Khilafah (Caliphate). Allah (swt) said, لَاَنۡتُمۡ اَشَدُّ رَهۡبَةً فِىۡ صُدُوۡرِهِمۡ مِّنَ اللّٰهِ‌ؕ ذٰلِكَ بِاَنَّهُمۡ قَوۡمٌ لَّا يَفۡقَهُوۡنَ “Surely they have greater dread for you in their hearts than for Allah. That is because they are a people who are devoid of understanding.” [Surah Al-Hashr 59:13].

On 26 January 2020, the Dairy & Cattle Farmers’ Association (DCFA) and the Pakistan Cattle Feed Association (PCFA) threatened to cut milk supplies to cities and shutting feed mills, if the government did not control feed input costs or raise milk price. Mr. Gujjar and Mr. Zafar said rice by-products, rice polish and stalk are being exported without meeting local requirements, leading to an increase in their prices in the local market, resultantly raising the production cost of cattle feed as well as milk.

Whilst Pakistan has yet to come out of the flour crisis, another crisis crashes through the door, that of rising prices and shortages of milk. The agriculture and industrial sector of Pakistan is in severe trouble because of the policy of the government to export anything which can be exported, to earn dollars to pay back usurious loans, whilst neglecting its local requirements. The policy might bring dollars and stabilize the foreign exchange reserves, but damages the local economy. It is essential for the agriculture and industrial sector that they get inputs from local markets at affordable prices, so they have minimum cost of production and people have products at affordable prices. In the last eighteen months, the government has increased the price of electricity and gas many times. It has indicated that it will increase further in order to fulfill IMF demands, which is also increasing the cost of production within the agriculture and industrial sectors. After raw material required for these sectors become expensive, because the government is exporting to earn foreign exchange, who can prevent the complete halt of these sectors?

The Bajwa-Imran regime, which came into power on the rhetoric of making Pakistan a state like Madinah, is following same capitalist polices of previous regimes, submitting to the economic plan of the IMF. Islam declares electricity and gas as public property. Therefore in an Islamic State, agriculture and industrial sectors will get these two basic utilities at affordable prices. Furthermore, the Islamic State is bound to not allow the export of anything required by the local market, whose short supply will create scarcity and increase prices. Also the currency of the Islamic State is based on gold and silver and the state only trades in this currency. Usury is forbidden, as is taking loans that allow the kuffar to dominate the affairs of Muslims. Therefore it will not undertake unnecessary exports to have dollars, to pay back usurious loans from colonial financial institutions. However, this economic system, according to all that Allah (swt) has revealed, cannot be implemented without the re-establishment of the Khilafah on the Method of the Prophethood. Therefore it is an obligation on us to establish the Khilafah for the enforcement of the commands of Allah (swt) and His Messenger ﷺ. We can only attain peace and prosperity in this Dunya and in Akhira (Hereafter) by re-establishing Khilafah. Allah (swt) said, وَمَنۡ يُّطِعِ اللّٰهَ وَرَسُوۡلَهٗ وَيَخۡشَ اللّٰهَ وَيَتَّقۡهِ فَاُولٰٓٮِٕكَ هُمُ الۡفَآٮِٕزُوۡنَ “Those who obey Allah and His Messenger and fear Him and avoid disobeying Him: such, indeed, shall triumph.” [An-Nur: 24:52].