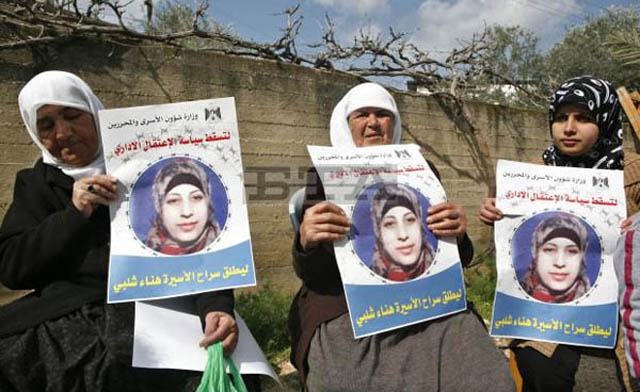 The Palestinian Prisoners Center for Studies said that the occupation courts have issued harsh and vengeful verdicts against a number of female prisoners during the recent period that included four sentences of 10+ years against female prisoners. The media spokesman for the Centre, Riyadh Al-Ashqar, indicated that the occupation seeks to make the verdicts harsher and that is in an attempt to deter the Palestinian women and girls from participating in the events of the uprising of Al-Quds and to scare them from undertaking stabbing operations or running over occupation soldiers and its settlers. To accomplish this objective the occupation is exaggerating in issuing high and unprecedented verdicts against a number of female prisoners, including those who are underage.

Girls in their prime, instead of being in their homes safe and comfortable, they are inside the occupiers’ prisons! Instead of sitting at the places of study looking towards the future they are being subjected to insult and degradation. That is because the female prisoners, of all ages, are subjected from the moment of their arrests, to beating, insult and verbal abuse, whilst the harassment practices escalate when they arrive to the centers of interrogation. That is where all interrogation techniques are practiced against them including both physical and mental, which includes beatings, sleep deprivation for many hours on end, terrifying and frightening them without paying any regard to their gender, age or special needs or requirements. The suffering of the female prisoners does not end there but rather the practices of pressure, terrorizing, and intimidation continue against them, even after the interrogation period has ended and the prisoners have been transferred from the interrogation cells to the detention rooms. That is where the prison authorities strive their utmost to be creative in their styles to degrade and oppress them and encroach upon their dignities. They do this through the practice of raiding their rooms at night and when they are sleeping. This is in addition to depriving them of basic human needs such as: giving them poor nourishment in terms of quantity and type; depriving them of the right to treatment by not providing essential medicines; a shortage in beds and coverings or being provided with good or sufficient lighting, and depriving them of sunlight due to small windows in their prison cells that are covered in bars and other types of security implements. They do this with even no consideration to what has been chided by international laws or human rights generally and in respect to the woman specifically. These are the conditions that all of the female prisoners suffer from, including minors under the age of 18 who have also expressed their fear of the female Jewish civilian prisoners with whom the prisons’ administration deliberately mix and integrate them with for the purpose of insult, degradation and beatings …

So, O Ummah of Islam, O People of Palestine:

How long will this disgraceful state of affairs and this abusive situation go on for?! For how long will the violation of the honour and dignity of the Muslim woman go on for whilst everyone is watching on, and whilst the best of them adopt the approach of grief and sadness?! Until when will Palestine and its people remain degraded captives? For how long will our daughters, sisters and mothers remain in the prisons of the Jewish entity? Does not the fever and sense of honour stir inside when you see them detained as prisoners and being subjected to all types of humiliation, degradation and beating?! Are these not your young flourishing daughters! Are they not your honours? Or do you have locks upon your hearts? Wars used to be launched to repel an act of oppression against a woman or to defend her (and her honour) … Now we have reached a situation where thousands of our daughters have been hurled into prisons and there is no reaction at all!! So, wake up and arise from your slumber and cast off the garment of lowliness and disgrace and work with Hizb ut Tahrir which is working to repel this oppression from them and from all of the Muslims via the establishment of the rightly guided Khilafah upon the methodology of the Prophethood … And that is not a difficult or far off matter for Allah to bring.