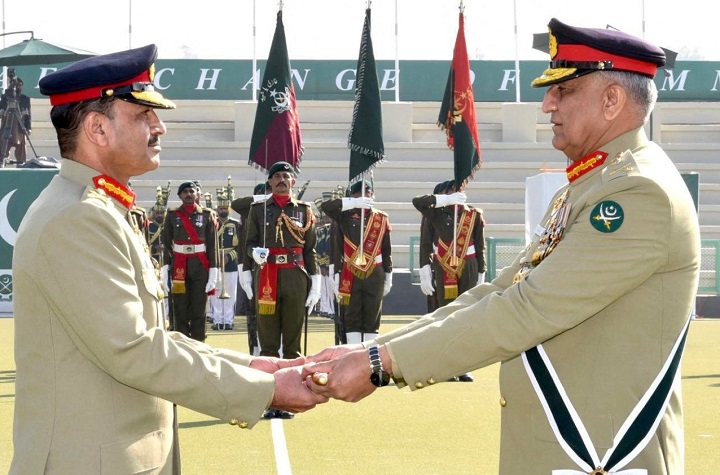 The Pakistan government has picked former intelligence agency chief Asim Munir as its new head of the army, a post that has significantly dictated the governance of the South Asian, nuclear-armed country in the past. (The Source)

Comment:
Pakistan from the time of its birth has been a very important country because of its strategic location and its brave, Islam-loving people. Since it has emerged as a nuclear power it has become a thorn in the side of its open and hidden enemies. Even though the British divided the Subcontinent in two and visibly were in favour of India, they did not let go of Pakistan and made sure that this newly born State would never stand on its own. The armed forces of India and Pakistan remained largely under the command of British officers. General Messervy was Commander-in-Chief of the Pakistan Army, while Field Marshal Auchinleck was the Supreme Commander of the Indian and Pakistan armies. Messervy was handpicked by Muhammad Ali Jinnah and is an example of nationalist loyalties. Muslims of India suffered layers of loss in the form of life, honour, assets and trust. Kashmir was one of these and in October 1947, Pashtun tribesmen mobilized for the freedom of Kashmir. Messervy at that time was in London and acting C in C was General Gracy who when commanded by Mr. Jinnah to help get back Kashmir, refused to obey. Field Marshal Auchinleck flew to Lahore and persuaded Jinnah to retract his order. This moment wrote down the future roles of Pakistan military and civilian Government relationship and this tug of war continues till now.

Many Chiefs with Muslim names and colonial hearts and brains have lead the Pakistan army in last 75 years, refuting the honourable responsibility assigned by Allah (swt). Muslims of Afghanistan, Bangladesh, Kashmir and India are our neighbours and in desperate need of help, while our soldiers are sent on UN missions and joint exercises with the countries oppressing our Muslim brothers and sisters. We see our military provides protection to the Chinese people working in Pakistan, taking them as support and friends, while Uyghur Muslims suffer in China and it shows no mercy towards them. All the alliances Pakistan army looks up to have no fear of losing it as they know how entangled they are in this business, which not only involves boundaries but building of personal assets too.

All the scrutiny and surveillance for the selection of army chief involves the benefit of power hungry political and military personnel and is closely watched by the West. The Pakistan army has the strength, training and ability to stand in the face of enemy which will not only bring protection to the Muslims around the world but also they will be loved and respected in a dignified way. The way of Khalid bin Walid, a warrior, a commander who is remembered for his bravery, victories and war strategies, not for the islands he left behind, and Khalid bin Walid (rh) was fighting and conquering under the protection of Muslim Khalifah (caliph). Only the harmonious systems of Islam under the shade of our guided Khalifah will bring peace and tranquility to the Muslim world and present a model State for the rest of the world.

May Allah turn the hearts of the ones who are capable of giving Nussrah and join them with the ones with hearts that only fear Allah.

Abdullah b. Amr b. al-‘As reported that he heard Allah’s Messenger (saw) as saying:

“Verily, the hearts of all the sons of Adam are between the two fingers out of the fingers of the Compassionate Lord as one heart. He turns that to any (direction) He likes.”

O Allah, the Turner of the hearts, turn our hearts to Thine obedience”. (Sahih Muslim)