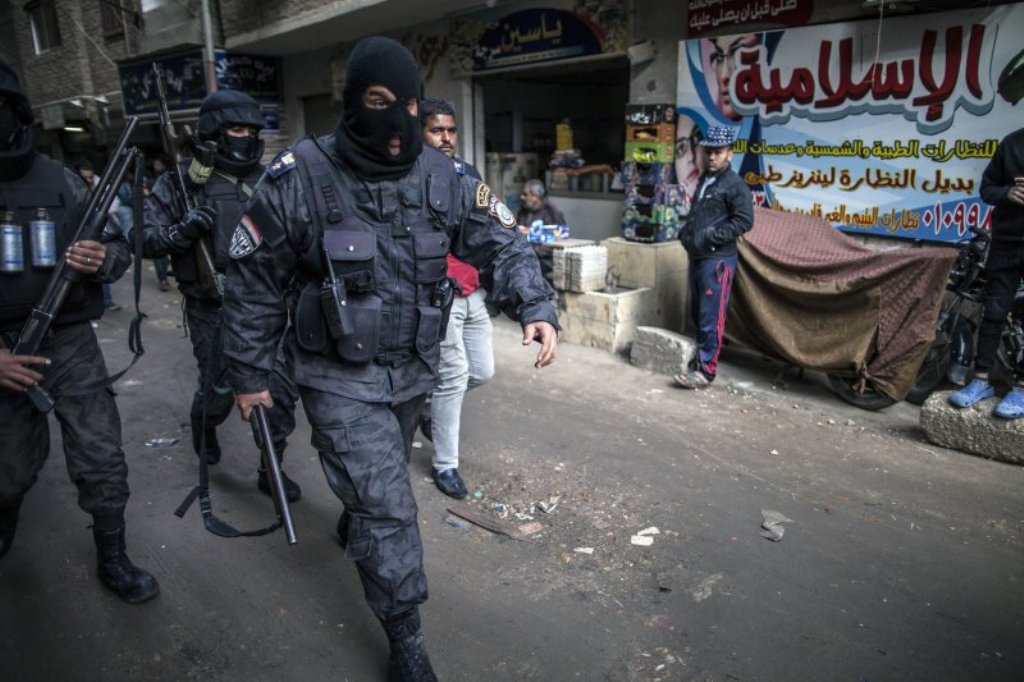 O People of the Kinanah! Do not you Destroy this Regime that Demolished Allah’s Houses and Your Houses?

As we are living in the atmosphere of the extension of the January Revolution, which is not over, as the West and its military men who took power after the coup think, we see successive revolutionary waves erupting at sometimes and fading at others, prevented from reaching their ultimate and the peak of their eruption by the barrier of fear that the regime restored with the massacres of Rabaa, al-Nahda and others, and its repressive machine which is constantly directed at the people and without exception during its struggle with the people of Egypt and their religion over the truth, and the failure of their sons from the military by not standing with their people against the tyrant.

This regime, or let’s say this ruling gang, worked to portray the conflict as between the state and a group of people, and made all its opponents and all those who violate its decisions as if they were that group, while in fact they do not represent the state, but rather they are the ones who usurped it and stole its wealth and goods and handed them over to the West at no cost. And that group does not represent the people or the revolution, but rather they were a direct cause of the return of the military gang to life after the January Revolution due to their naivety.

This gang of American generals realizes that it does not have solutions to people’s problems and does not know that its catastrophic decisions will inevitably lead to an explosion, with which it will not benefit the use of iron and fire to suppress people, nor the doses of painkillers that they broadcast in the media to numb the people, nor the shuttle tour between the beneficiaries and the stakeholders to try to contain the revolutionaries, and we wish it was to contain with real actions and tangible reliefs, but with sweet words and scattered aspirations here and there, as if someone distributes a mirage to people!

While the regime persists in its aggressiveness and arrogance expressed by the head of the gang threatening the army to descend into every village in Egypt to implement his decisions to demolish homes and mosques, and did not dare to attack one church while demolishing more than seventy mosques on the pretext that they are built on state-owned land, this is after years in which mosques are closed directly after every prayer and no activity is allowed in them either, while churches are open around the clock and the gang does not dare to limit their role or prevent them from broadcasting their thoughts, which certainly do not bother them, but rather Islam, which seeks to restore the rights of the people that they rob and steal.

Then the submissive Sheikhs of the Sultan come out to us, claiming that prayer in these mosques is invalid, and that they must be demolished without a single evidence and the need to demolish the houses of the people that shelter them and that they have built with their hard work and sweat for years and put all their possessions and savings in them, in the complete absence of the state that must take care of them, until the gang came to demolish those houses over their heads and throw them and their children out in the open, begging for  sustenance…

Whereas palaces, hotels, shops, malls, etc. are built for members of the gang and those who have gathered around them on that state-owned land, as they claim, and no one dares to touch it, let alone demolish them, and while the state imposes an extreme state of austerity on all people except the military, so their salaries and pensions increase many times over, apart from privileging them with services that other people do not enjoy; perhaps they are a race other than human beings, and perhaps for that they participate in killing people!

In the face of the demolition of houses and mosques over the heads of the people, they came out and said it truthfully and sincerely (there is no god but Allah and Sisi is the enemy of Allah) even though not only him is the enemy, but all the gang of generals and those who helped them are enemies of Allah, His Messenger, His religion and His Ummah.

O People of the Kinanah! It is the duty of the state towards its citizens to provide each of its citizens with three things to a level of sufficiency which are: food, clothing and housing, and to provide him with non-essential needs and luxuries as much as possible, and do not differentiate between Muslim and non-Muslim, but everyone is equal. And it must guarantee to the society as a whole three things at the highest possible level and for free, which are: security, education and health care. As for security it means securing their lives, money and savings, preserving their religion and their dignity, and not demolishing their homes, violating their dignity and robbing them of their savings as the gang is doing now. As for education, it is ensuring the highest possible level of education and for free for all. There is no difference between Muslim and non-Muslim, nor between rich and poor, and there are no schools for the rich and others for the poor. Rather, the state eliminates class and fanaticism and everything that produces it. As for health care, it is to provide treatment and medicine to all people at the highest possible level and for free. There is no difference between the rich and the poor or a Muslim and a non-Muslim, but everyone is equal and cared for. It treats itself and others the same treatment, there are no elites, no special treatment for generals, no advantages for the military or others, but all are equal.

However, all of this is not fulfilled by the promises of the generals’ gang and not by Capitalism by which they govern, but rather by Islam which they fight and its system, which they seek to prevent from returning to rule in its state, the Khilafah Rashidah (rightly guided Caliphate) on the method of the Prophethood.

O People of the Kinanah! Whoever destroys the houses of Allah and your houses does not deserve to rule you, and changing him is your duty. And your revolution is not and will not be completed except by carrying Islam with its civilized project that guarantees your dignity, freedom, and prosperity of your life, and guarantees you justice, just like the justice of Omar that you know, so do not accept a regime other than Islam, its system, and its state, the Khilafah Rashidah (rightly guided Caliphate) on the method of the Prophethood; a complete state that applies Islam in its entirety and justice. This is your right, so demand it and do not accept anything less than it so that you do not return to the same point and the same gang rules you with different names!

O Sincere People in the Army of the Kinanah! May every hand that participated in the demolition of mosques and homes of the weak and the helpless people be paralyzed, the Blessed and the Exalted Truth, says: وَمَنْ أَظْلَمُ مِمَّن مَّنَعَ مَسَاجِدَ اللّهِ أَن يُذْكَرَ فِيهَا اسْمُهُ وَسَعَى فِي خَرَابِهَا أُوْلَـئِكَ مَا كَانَ لَهُمْ أَن يَدْخُلُوهَا إِلاَّ خَآئِفِينَ لهُمْ فِي الدُّنْيَا خِزْيٌ وَلَهُمْ فِي الآخِرَةِ عَذَابٌ عَظِيمٌ “And who are more unjust than those who prevent the name of Allah from being mentioned in His mosques and strive toward their destruction. It is not for them to enter them except in fear. For them in this world is disgrace, and they will have in the Hereafter a great punishment.” [Al-Baqara: 114].

Who is worse than this regime that destroys the houses of Allah?! This regime that you protect is the one that must be demolished, not the mosques and people’s homes that are demolished under your hearing, sight, and guardianship, but with your own hands, so how can you meet your Lord with hands stained with the blood of innocent people and faces that have not been soiled with dust of jihad for the sake of Allah, but soiled with dust of the rubble of mosques and people’s houses? Prepare your answer and your argument, or declare innocence from the gang of military the agents of America and let it drown without you, because America will not protect it and the people will not have mercy on it, so do not be in its clique. And know that all that the regime gives you to guarantee your loyalty is a small amount of some of your rights, so do not take it as a bribe and feed your children from unlawful money. And take your full right by your siding with your people in their revolution and the support the Ummah’s only civilized project presented by Hizb ut Tahrir, and the guarantor of people’s rights, freedom and dignity by applying Islam completely and comprehensively in its rightly-guided Khilafah state on the method of Prophethood, may Allah forgive you what has already occurred and accept from you and open at your hands, so Egypt and indeed the whole Ummah will be saved through you. How happy would you be if you did, and how glorified would Egypt, Islam and Muslims, be with you. You will remember what we now say to you, we entrust our affairs to Allah.