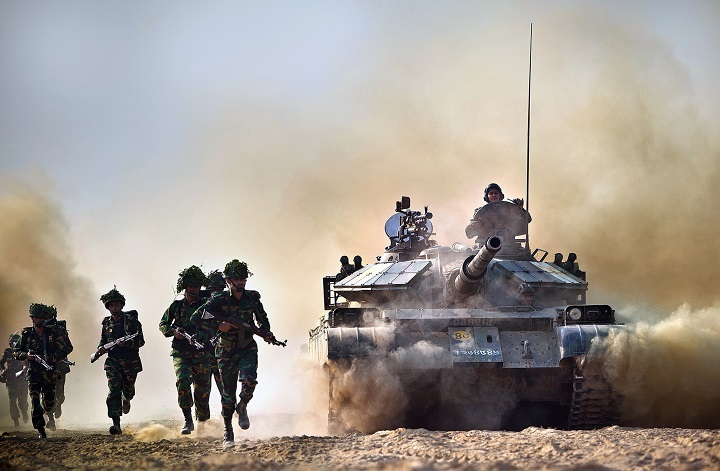 Hizb ut Tahrir has working to restore the Islamic way of life by freeing Muslim countries, including Bangladesh, from the clutches of the Kafir Colonialists and reestablishing the Khilafah Rashidah (rightly guided Caliphate); and the Kafir Colonialists are trying to prevent the return of the Khilafah through their puppets – the secular Muslim rulers. The Hasina government is one of these puppet rulers that is systematically trying to suppress the leaders and activists of Hizb ut Tahrir who are leading the movement to reestablish the Khilafah in this country. Despite being a non-violent and ideological political party, arresting and prosecuting the leaders and activists of Hizb ut Tahrir under the notorious anti-terrorism law, detaining in secret cells without turning them up for court on time, denying bail repeatedly and unjustly keeping them imprisoned, intimidating the family members, wrongfully attempting to take “confessional statement” under Section 164 through deception, physical and mental tortures are just a few examples of this government’s routine repressions. In imitation of the America’s CIA, this tyrannical government has also set examples by giving electric shocks at remands and using vicious methods of torture, such as waterboarding. O Muslims, in suppressing the call of Islam, the Hasina government is following in the footsteps of Abu Lahab who left no stone unturned to obstruct the establishment of the Islamic State by the Prophet (saw), that made him deserve to be destroyed by Allah Al-Qawwi Al-Aziz:

O Muslims, you know that Hizb ut Tahrir is a political party whose ideology is Islam and whose methods are adopted in the light of the Quran and Sunnah;

“Indeed there was a good example for you in the Messenger of Allah, for all those who look forward to Allah and the Last Day and remember Allah much” [Al-Ahzab: 21].

Hizb ut Tahrir is creating mass awareness and public opinion in favor of the Khilafah through its intellectual and political activities such as leaflets-posters, processions-meetings, gatherings, seminars-conferences, mass communication in social media, etc. Hizb ut Tahrir does not believe in changing power through political violence or armed struggle, but rather calls on the sincere officers of the military to remove the ruling regime and give material support (nussrah) to Hizb ut Tahrir to establish Khilafah.

As you are aware, Hizb ut Tahrir has been presenting to the people the flaws of the secular ideology and the oppression of the Capitalist system, exposing the naked interference of the US-British Kafir Colonialists and their regional allies in the politics and economy of the country and their evil plans and conspiracies against the sovereignty and military power of the country, and has been protesting against the corruption and misrule of the secular rulers. You may recall that Hizb ut Tahrir protested against various military agreements, as well against treaties to give transit to India, and also exposed the Indian conspiracy to weaken the army in the Pilkhana massacre. It has similarly opposed various joint military exercises with the United States, including Tiger Shark and agreements such as TICFA, ACSA, that were made to establish their dominance over our strategic resources and the military. Hizb ut Tahrir has outlined how the Khilafah system will emerge as a self-reliant and leading State against the oppressive Capitalist system imposed by the Kafir Colonialists.  It detailed how Islam ensures the basic needs of all citizens, regardless of religion or race, and ensures a fair distribution of wealth among the people, not concentrated in the hands of a few. Through many online conferences, Hizb ut Tahrir presented to the people the draft constitution of the Khilafah State, the administrative structure of the Khilafah State, as well as policies regarding the economy, male-female relations (social system) and foreign policy. This has created widespread support for the Khilafah in all walks of life.

O Muslims, why is it considered a crime to demand the rule of Islam, i.e. the Khilafah system, in Muslim lands? Whereas, Allah Subhanahu wa Ta’ala says,

Why are the non-violent and intellectual activities of establishing Khilafah being equated with extremism and militancy? In fact, one of the principles of the Kafir colonialists is to prevent the revival of Islam on the pretext of terrorism or militancy, in the implementation of which the puppet regime is cooperating. The Hasina government claims that the Kafir-Mushrik States are giving their support to her government for its success in the “War on Terror” which is really the “War on Islam”. O Muslims, we call on you to speak out against this ongoing war on our Deen, to take the work of establishing the Khilafah further ahead and to protest against the oppression of the government on those who call for the reestablishment of the Khilafah.

O Sincere Journalists! We are surprised to find that some media outlets denounce Hizb ut Tahrir as a militant or extremist outfit, and leaflets published by Hizb ut Tahrir and publications on the constitution, administrative structure, economy and foreign policy of the Khilafah State as “extremism”. Do these slanders and propaganda not make your objective journalism questionable? Since Hizb ut Tahrir is well-established in society described as a political party and well-known to all classes of people, are these slander and propaganda not tarnishing your credibility and reputation? Remember, liars are cursed by Allah (swt),

It is also your duty to verify the information provided by this oppressive government about Hizb ut Tahrir:

“You who have faith! If an evil-doer brings you a report, scrutinize it carefully…” [Surah Hujurat: 6].

Our call to you is to resist the false rumors about Hizb ut Tahrir and come forward to establish truth and justice.

O Judges! Remember that Allah Subhanahu wa Ta’ala is the Judge of all judges, and one day you too will have to stand on the dock for His Judgment. He (swt) has instructed you not to judge by any law other than that which He (swt) has sent down, and you must establish justice at the time of judgment:

“and when you judge between people, judge with fairness…” [Surah An-Nisa: 58].

It is as clear as a daylight to you that the so-called anti-terrorism law enacted by the puppet government in the war against Islam has been issued under the direction of the US and her allies to suppress the Muslims. This law has nothing to do with justice. It is unjust to try the leaders and activists of Hizb ut Tahrir under this notorious law. Moreover, it is extremely unjust to hand them over to the security forces for torture by repeatedly granting them remand, or to keep them in jail for months by repeatedly denying them bail. The Prophet (saw) said:

Our demand and expectation from you is that you will make the right decisions. O Judges, when you give your verdict, be loyal to Allah (swt), do justice to those who carry the call of Islam and the political activists of the Khilafah, and release them ignoring the orders of the government to keep them unjustly incarcerated.

“Verily, those who put into trial the believing men and believing women (by torturing them and burning them), and then do not turn in repentance, (to Allah), will have the torment of Hell, and they will have the punishment of the burning Fire” [Surah Al-Buruj: 10]

“Whoever intimidates a believer, there is no salvation on the Day of Resurrection except to be intimidated.” [Kanz al-Ummal].

We further remind you that if you do not desist, not only will you be among the losers in the Hereafter, but you will also face terrible loss in this world after the return of Khilafah, which is very near, insha’Allah. The perpetrators will be brought to justice for all the crimes committed against the sincere children of Islam and the Ummah.

O Sincere Officers in the Military! The Prophet (saw) said,

According to this hadith narrated by the Prophet (saw), you fall in the first group because you have the military power in your hands through which you are able to remove any oppression. Therefore, it is your duty to sincerely take initiative to remove the government’s oppression on the callers of Khilafah. Instruct your colleagues in the field administration, to stop oppressing those who call for the Khilafah. Finally, for the sake of Islam and the Muslims, remove this tyrannical government from power and hand over authority (give nussrah) to Hizb ut Tahrir to reestablish the Khilafah.

“O you who believe! Be afraid of Allah, and be with those who are truthful.” [Surah At-Taubah:119]