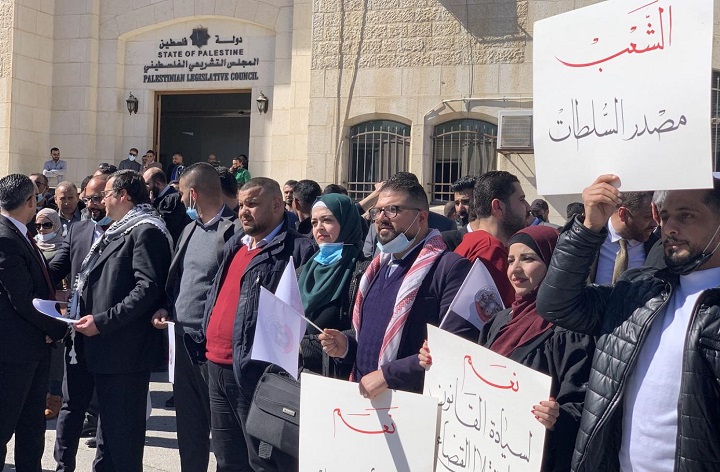 The Bar Association announced its strike on Wednesday and Thursday and a sit-in in front of the Courts Complex in Ramallah, with the possibility of escalation in measures to reject the entry into force of amendments to the so-called “execution, and basis of civil and commercial trials and penal procedures” laws issued by the Palestinian Authority’s president through “law decisions” last March. The Palestinian Authority (PA) did not accept any measures to amend it, while the Palestinian police closed the perimeter of the court complex on Wednesday, in anticipation of the sit-in of lawyers who announced that they would sit in the place as part of their protest against these decisions.

This lawyers’ sit-in comes, they are the category that represents people in cases of rights, grievances and disputes before the courts, as a response to what the PA is doing in terms of unjust enactment of unjust laws that deprives rights. And they were the ones who had previously taken protest measures in response to authoritarianism and tampering in the judicial aspect, when the PA sought – and still does – to make the judiciary a tool to protect major criminals and a cover for their crimes against the people of Palestine, such as the formation of a Transitional Higher Judicial Council, and the appointment of its president, who was given the power to amend laws and to re-appoint himself, as well as through the so-called “law decisions” which are now issued by the PA or their main influential parties.

These “law decisions” came with amendments, to say the least, that complicate and waste people’s rights instead of maintaining them. They fuel disputes between them instead of resolving them, and have opened several loopholes to protect criminals through what these new laws allow from the possibility of dropping lawsuits. They provided cover for the authorities to extend the period of detention without being brought before the court, that is, they provided the cover for the corrupt security services to arrest whomever they want regardless of what the law requires in terms of protecting individuals and not to detain them except by a judicial decision. And other matters mentioned by lawyers in their protests, such as assigning the prosecutor the task of bringing witnesses, electronic notification of cases or by phone. As well as stopping the implementation of financial claims for cheques and bills of exchange on the grounds of forgery and assigning the prosecutor to prove their validity, and exorbitant fees for exploiting the people’s need to file cases and litigation for tax purposes and so on.

The aforementioned new laws have come into force and will push people into chaos and fighting because they will not find justice and laws that protect their rights. These amendments will strike the confidence between people in their financial transactions, and will push them to deal through usurious banks, and the beneficiary of these amendments will be the banking sector and the big capitalists who do not care about what is permissible (Halal) and what is forbidden (Haram), and the result will be plunging society into the quagmire of debts from which people will only reap a war with Allah (swt) and His Messenger (saw), and mortgaging their wealth to banks.

Thus, the PA continues to destroy and corrupt society, and it wants to harness the judiciary as a tool and cover for the implementation of its crimes. The far and near knows the rampant corruption in its institutions, especially since its security services are the most prominent in violating the judiciary and ignoring its decisions.

The Palestinian Authority is implementing the policies of the enemies of Islam that aim to destroy you and make the Blessed Land an easy prey for the Jewish entity. Its crimes against you do not stop at ceding the land to the Jews, the most hostile people to the believers, but went beyond that to provide all the reasons and conditions that enable the Jewish entity to tighten its grip on the Blessed Land, the most prominent of which is the destruction of society and the demolition of its values. The target now is not your land because it has been surrendered, rather, the target is you, your families and your children. The attack is comprehensive, targeting education, the family, the economy, the judiciary, and the media. And we believe that you are noticing its devastating effects on your families and your interests. To the point that the LGBTQ have advertised clubs and rallies in which they raise their flags in flagrant defiance of the values ​​of chastity and purity.

The Palestinian Authority, in its shameful security role, its economic and tax policies, and its sponsorship of corruption and the decline of morals, has become a knife that slaughters the people of Palestine and a stick that breaks their back, killing their rebellious spirit and their ability to withstand the occupying Jewish entity, and it completes the cycle of corruption with more corruption and injustice in the judiciary and laws. The standing of the people of Palestine against the Palestinian Authority’s tampering and corruption in all aspects of their lives, and their support for all those who stand against its oppression and its neglect of people’s rights, as lawyers do now, is part of strengthening their steadfastness and their ability to remain in their land until Allah permits victory and liberation, and the Ummah and its armies restore their role and liberate the Masra (site of Isra) of the Prophet.  If people fail to do so, they will not lose their land and sanctities to the Jews only, but will also lose their dignity, their children, their spouses, and the most severe loss is the loss of their Deen and their commitment to the law of their Lord, and that is the clear loss.

“And fear a trial which will not strike those who have wronged among you exclusively, and know that Allah is severe in penalty” [Al-Anfal: 25].

“By the One in Whose Hand is my soul! Either you command good and forbid evil, or Allah will soon send upon you a punishment from Him, then you will call upon Him, but He will not respond to you.”