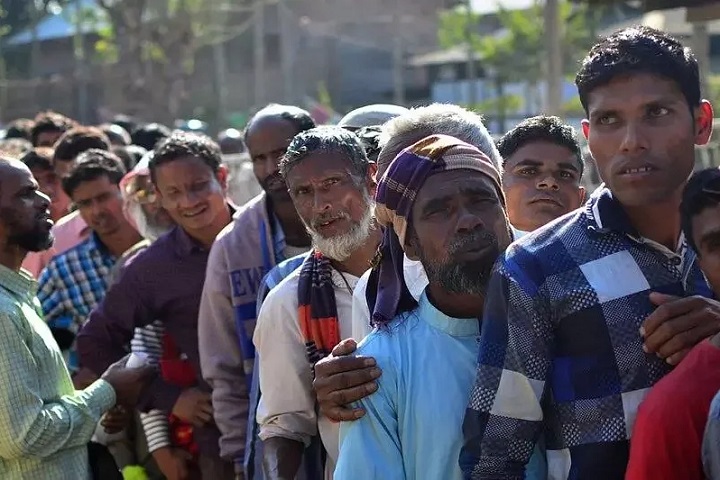 The world witnessed, on social media platforms, a chilling video clip showing Indian police forces shooting the residents of a Muslim neighborhood, in the northeastern Indian state of Assam, to forcibly evict them from their homes. The footing showed the cold-blooded shooting of a farmer, whose name was Moinul Haque. He was hit in the chest and fell down, dying, after which police officers charged to beat him with sticks, whilst he was dying. A photojournalist, accompanying the police forces, Bijay Shankar Baniya, stomped on the wounded, motionless body of Moinul Haque, may Allah have mercy on him and forgive him. This happened within the process of displacing thousands of Muslims in the state of Assam, in northeastern India. The Minister of Assam, responsible for the State of Assam, Himanta Sarma, tweeted about the evictions carried out by Assam Police, expressing his joy, “Continuing our drive against illegal encroachments, I am happy and compliment district administration of Darrang and @assampolice for having cleared about 4500 bigha, by evicting 800 households, demolishing 4 illegal religious structures and a private instn at Sipajhar, Darrang.” Meanwhile, news sources reported that about 20,000 Muslims were expelled from their homes, after the authorities’ decision to eradicate residential neighborhoods for Muslims, on the pretext that they were built on state-owned land.

The killing and persecution of Muslims in India in general, and in Kashmir and Assam in particular, is not a new matter. It has persisted ever since British colonialism violated the Islamic Indian Subcontinent, taking various criminal measures against the Muslims there. Britain’s policy was based on ethnic cleansing of the Muslims in the Subcontinent, dividing them within four entities, India, Pakistan, Bangladesh and Myanmar (Burma), in order to break up the strength, solidarity and unity of the people, weakening the dominance of Islam and Muslims over the Indian Subcontinent.

The BJP government, led by the butcher of Gujrat and destroyer of the Babri Masjid, Modi, and the local government in Assam, are merely an extension of that British colonialist era, albeit with a new American slant, as Modi’s party leans towards American colonialism. So, it was not surprising to see the stone silence of the kafir West, led by the new and old colonialists, towards the crimes committed by the fosterling of Western colonialism, India, against Islam and Muslims within its territory. Nor is it surprising to see the stone silence of the harmful rulers in the Muslim World, both the nearest and farthest, as they are agents of colonialism. Indeed, they do not possess authority, except what is commanded by their masters in the West. Yet, had they intended to support the oppressed Muslims of India, it would not be difficult for them to support them.

For instance, Indian investments in the United Arab Emirates (UAE) are the largest amongst all other nations in the world. Indian economic interests within UAE are so vital, it cannot afford to lose them. Furthermore, the Indian work force in the Gulf States are considered as a life-line for remittances to the Indian state treasury. The mere threat of expelling Hindus from such states would force India down on its knees, as the UAE ranks first in the Arab world and 11th globally, in the list of Foreign Direct Investment (FDI) in India, to the value of about $17.2 billion. The UAE is the third largest trading partner of India after the United States and China, with a trade volume estimated at $60 billion. UAE exports commodities such as petroleum products, precious metals, chemicals and wood products to India. The UAE exported $10.9 billion worth of crude oil in 2019-2020 and it was India’s second largest export destination. The UAE accounts for about 50% of India’s total trade with the Gulf Cooperation Council (GCC) states and 71% of India’s total exports to the GCC. In terms of investment, the UAE is the largest Arab investor, as its investment represents about 82% of the total Arab investments in India, with a total cumulative investment value of $15 billion. Thus, the UAE alone can deter India and support the Muslims there, yet such remains elusive!

Supporting the Muslims in India and protecting their sanctities are obliged upon all the Muslims, particularly the neighboring strong states such as Bangladesh, Pakistan and the Taliban in Afghanistan. Any of these three fronts can deter Modi and his racist government. However, this requires the people of power and authority in Pakistan and Bangladesh to topple their agent governments, who are collaborating with Modi. It is only then that they can mobilize the armies to support the Muslims in India and demolish the fortress of the Hindu State, not just to liberate Kashmir and Assam alone, but also to return the whole Indian Subcontinent to the fold of Islam, under the banner of the Second Khilafah Rashidah (rightly guided Caliphate), whose time has come.

It is obliged upon the Muslims in the Muslim World, including those in UAE, Pakistan, and Bangladesh, not just to demand the boycott of Indian goods, but to also demand the severing of all ties with the Indian state, including economic relations. It is obliged for the Muslims to demand the Muslim armies, particularly the armies of Pakistan, Bangladesh, Hijaz and the Emirates to overthrow their treacherous rulers and grant their Nussrah to Hizb ut Tahrir to establish the Khilafah and appoint the Rightly Guided Khalifah, who would lead those armies to support Islam and Muslims, repeating the history of the military commander, Muhammed bin Qasim Al-Thaqafi, who opened the Indian Subcontinent to Islam.

The racist policy of Modi against Muslims in India can only lead the country to its destruction and greater fragmentation than even currently. Such a policy will not serve any in the country, regardless of their religion or ethnicity. Moreover, it is all only a continuation of Britain’s colonialist policy and America’s policy of war against Islam. The policy only serves the interest of the West and America, whilst all the people of the India will pay a high price for it.

The number of Muslims in India is approximately 400 million people, constituting 40% of the population of India. The number is not as the government claims, which is half of that. Therefore, it is not correct to treat the Muslims as a defeated minority. On the contrary, the Muslims of India have a natural connection to all the Muslims in the Indian Subcontinent and Central Asia, which would make them the people of those lands.

As for the Muslims of India who are targeted and oppressed, we remind them that weakness invites humiliation, whilst preparedness for death brings honor. The Messenger of Allah (saw) said:

Therefore, we say to you, stand for your rights just as your brother Moinul Haque stood. He was brave in confronting those who wished to loot his home. And to the people of India in general and the intellectuals in particular, we have addressed you repeatedly to stop the insanity of Modi and his entourage from within the people of India. Remember that you are living alongside Muslims, whilst their armies surround India. Remember that Muslims are one Ummah and soon the situation will turn around, when their lands will be unified and the borders between them will be erased. You may well be regretful then.