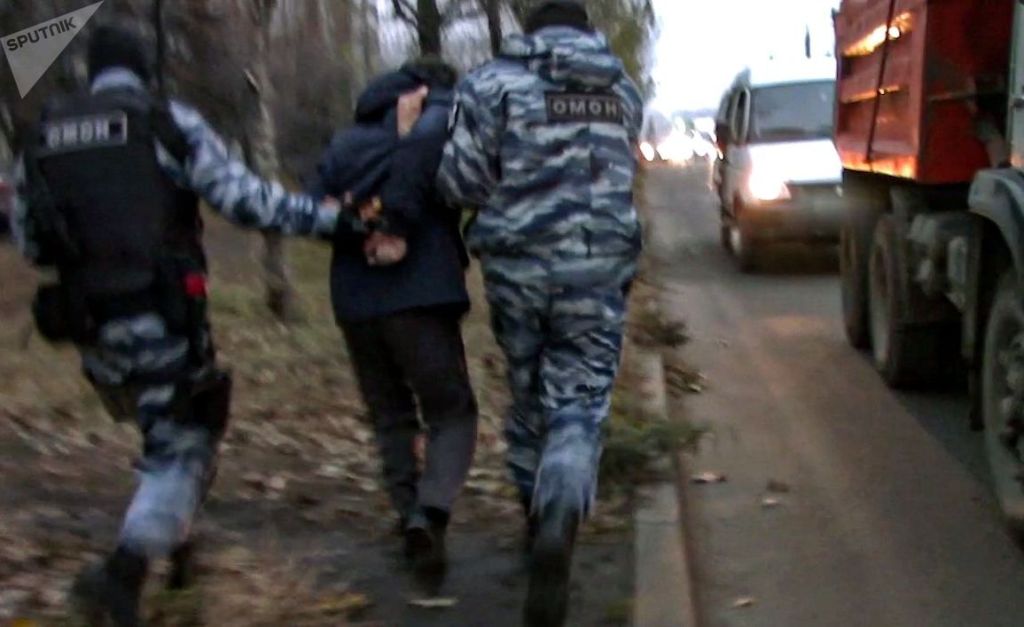 On the 6th of November, 5 men were arrested in Kazan on charges of involvement in Hizb ut-Tahrir, the Russian FSB reports. Footage of searches and detentions in the capital of Tatarstan was spreaded in Russian and regional media outlets.

According to the security officials, the suspects intended to facilitate the creation of a “world caliphate” and the violent overthrow of the current government. “With the use of conspiracy measures during the meetings, they spread terrorist ideology among the inhabitants of the Republic of Tatarstan, recruited Muslims into their ranks,” the FSB’s informational center reports in a statement.

At the places of residence of the detainees, they found and confiscated a significant number of books banned in Russia, and also seized means of communication and electronic media, – the special service said. At the same time, the video footage of the arrests shows that only ordinary not prohibited Islamic books from bookstores was found in the homes of the detainees.

Recall that on October 29 this year in the city of Kukmor (Tatarstan), 16-year-old Russian teenager Vitaly Antipov threw Molotov cocktails at the local department of the Ministry of Internal Affairs, after which he attacked police officers with a knife. During the attack, he called the police officers enemies of Allah. One of the officers was stabbed. The attacker was shot dead during the arrest.

The relatives of the detainees in Kazan in an interview with Business-Gazeta stated that there was no doubt that the regional department of the FSB had demonstrated its work with new arrests after the Kukmor incident. “They are presented with participation in a terrorist organization. Nothing was found in the houses. I understand, if they would assemble and craft, make something … None of this happened!”, – One of the mothers of the detainees was indignant in an interview with journalists. Relatives of most of the detainees denied information about membership of detainess in Hizb ut-Tahrir.

Russian special services have long ago turned the fight against Islam, Hizb ut Tahrir and the so-called “Islamic terrorism” as a vehicle for gaining political influence and receiving incredible funding from the federal budget. For this reason, over the past 15 years, we can very often observe arrests on charges of involvement in an islamic political party, even those people who actually had nothing to do with it.

It is noteworthy that at the moment more than 400 people in Russia are imprisoned on charges of involvement in Hizb ut Tahrir, and even being arrested, they are used by the special services to constantly demonstrate to Moscow their work – they are constantly being the object of operational development being in places of detention, their parents and wives are under constant control of local FSB operatives.

Obviously, in addition to the common centuries-old struggle of Russia against Islam and its bearers, today in the country another factor is beginning to play a big role in the persecution – the material and political interests of the clan of security officials, who, after Vladimir Putin came to power in 2000, for the first time since the time of General Secretary Andropov came to the helm in the country. Young men and women who love Islam and want to bring it to their peoples became a victims of the political games of the security forces.

Allah Almighty said: إِنَّ الَّذِينَ فَتَنُوا الْمُؤْمِنِينَ وَالْمُؤْمِنَاتِ ثُمَّ لَمْ يَتُوبُوا فَلَهُمْ عَذَابُ جَهَنَّمَ وَلَهُمْ عَذَابُ الْحَرِيقِ “Those who persecute the believing men and women and then do not repent will certainly suffer the punishment of Hell and the torment of burning” [85:10].