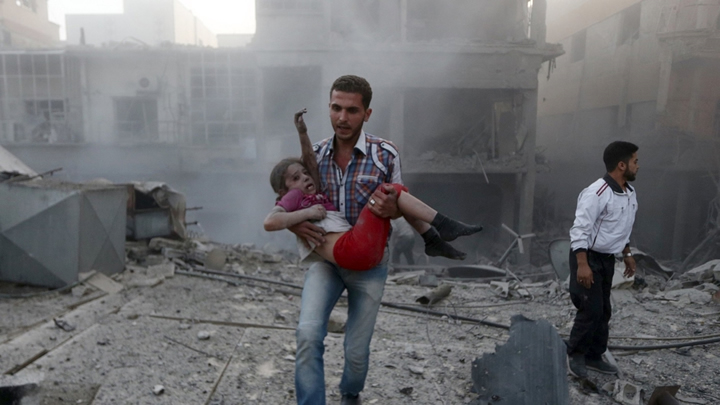 Asharq Al-Awsat: “We are going through the worst days of our lives in Ghouta” is the description in short given by the director of the hospital in eastern Ghouta Amanab Balur located east of the capital Damascus, of what the area is going through of intensive bombardment these past days which led to the killing of over 275 civilians from the escalation beginning of last Sunday, and according to the Syrian Observatory for Human Rights 58 children and 42 women were among the dead with an additional 1200 persons injured in the bombardment.

Comment:
Seven severe years have passed over the people of Ash-Sham, screams and crying from children and women that will shake the mountains and the crying of the elders will make stones weep because some stones fear Allah, but where are the hearts of the generals and soldiers of the Muslims Ummah, don’t they tremble for these cries? Do they not hear and see or have their feelings died?! Do they not read, write or look at the events taking place in the Muslim Ummah? Maybe one of them could answer the questions asked by every Muslim.

We do not address the rulers as they are not from us and we are not from them, if they were from us their feelings would have shaken and their sleeves would have moved – but nobody listens, therefore we address the ones who are from us and we are from them, the armies of the Muslim Ummah which guard the feelings of these oppressing rulers and their like. Really the time has been long for these, who is there for the children, women and elders of Ash-Sham? Who is there for the children of Yemen and Libya killed by the generals and soldiers of the Muslim Ummah under the pretext of the military orders while Allah’s Messenger (saw) says:

“There is no obedience in a creature in the disobedience of Allah”?!

The West has succeeded in turning our soldiers and generals into mere employees who think of salaries, positions and promotion of ranks!! These armies were not formed to defend the Ummah and protect the blood and honour of the Muslim Ummah – this is how it was drafted!

Before concluding, we ask Allah Almighty to let the generals and soldiers hear the screaming of the women, children and elders and that He Almighty stirs their feelings so that their limbs may move and thereby they change their Ummah’s situation…

Finally we say: the best of nations sent for humankind, death is certain and meeting Allah (swt) is certain and victory from Allah (swt) is also certain. Therefore make your death for the sake of Allah as it is better so you may meet Allah in goodness, and Allah making you victorious as He is good, and it is for one of the two either victory or martyrdom. We rejoice with glad tidings from Allah (swt) and relieve your hearts as Allah (swt) rejoiced the Prophet (saw). Allah Almighty says:

“Allah made it but a message of hope for you, and to reassure your hearts thereby. Victory comes only from Allah the Almighty, the Wise”
[Aali-Imran: 126]