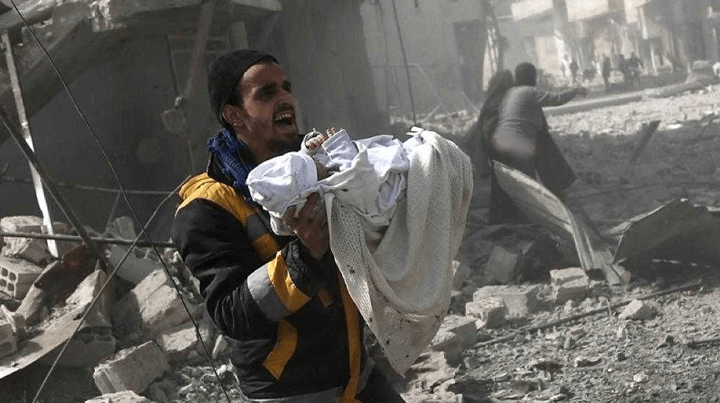 As you watch this, the bombs from the savage Syrian and Russian regimes continue to fall upon the heads of our Ummah in Eastern Ghouta. Words cannot express the horrors that we are witnessing in this Blessed land. Since last Sunday, so in just 1 week, more than 500 people have been killed, including 150 children…..and the death toll continues to rise day after day.

They are indiscriminately targeting civilians – men, women, children, babies in homes, shops, schools, hospitals, ambulances and markets, leaving children buried in the rubble of buildings. Children have been forced to take refuge in caves, dugouts or the basement of their homes as they ‘wait their turn to die’.

Doctors have resorted to caring for premature and newborn babies in incubators in cellars where they face dying from the severe cold. The UN Secretary General described the situation as ‘Hell on Earth”.

Food, fuel and medicines are in severe shortage due to almost 5 years of the brutal siege by the Syrian government. Doctors are using expired medicines to treat the ill and injured and there is mass starvation that has impacted children the most. According to the UN, around 12% of children under 5 are said to be acutely malnourished.

The dying wish of mothers is that before their children die, which they see as inevitable due to this ferocious bombardment…that they atleast have the comfort of a full stomach! While other mothers are praying that Allah takes the soul of their children – Why? … To end their pain, to end their suffering….because at least they will have food in Jannah. Can you imagine the scale of suffering brothers and sisters, when a mother prefers her own child, who she loves with all her heart, to die rather than live, because death will stop their agony!?

OR can you imagine the level of despair, when the doctors of Eastern Ghouta are so broken having treated child after child, injured from the relentless bombing, with limbs missing, blinded, their tiny bodies ripped apart….that they no longer have the heart to deliver babies from the wombs of injured mothers because they cannot bear the thought of the horrors of the world they will be born into.

We see the bombs raining down on the heads of the starving children of Eastern Ghouta as they face annihilation. We see row after row of slain children wrapped in their bloodied kaffan. We see the tears of the mothers of Ghouta crying out for a morsel of food to feed their young who are dying from hunger. And we see the utter decimation of this blessed land, and our brothers and sisters being slaughtered into submission, bracing themselves for the ground invasion by Assad’s butchers and a massacre, perhaps worse than that which we saw in Aleppo.

And yet despite all these horrors, this unimaginable scale of suffering, the international community, the UN, the regimes of the Muslim world watch on, turning the other way, ignoring the bloodbath, and giving Assad and his criminal allies – these murderers of children – LICENSE to continue the slaughter with impunity. They have taken a match to all their conventions on the protection of human life, human rights, and the rights of the child!

Clearly, even this ‘Living Hell’ is not enough to shake their conscience! For them, the rivers of blood, formed from the children of Ghouta is a price worth paying for their bloodstained political interests in this region! Indeed, it seems there is no limit to the barbarity they are willing to witness to secure their selfish aims.

Surely no further proof is needed to show that we cannot place even a speck of hope in the self-serving conscienceless Western governments, the UN, or the regimes of the Muslim world to protect the Ummah in Syria when they have abandoned the children of Ghouta to their death, AND when all their so-called peace-initiatives, interventions and proposed solutions have only bought the butcher Assad time to maim, rape and kill the Muslims. What we witness on our screens of the horrors in Eastern Ghouta, categorized as a “de-escalation zone’ in last year’s Astana Peace Process…..is the true face of a so-called peace-initiative’ in the eyes of Russia, Turkey, Iran and the international community!

So an Ummah, what can we do to bring an end to this nightmare….to protect the blood of our brothers and sisters, and the children of Ghouta?

–      Of course we should continue to give charity…in the hope that some of it at least may reach those who are desperate need…but we know that aid will not stop the bloodshed!

–      Of course we should make dua to Allah (swt) that He destroys the Assad regime and all its allies and protects our Ummah in Syria from this slaughter and oppression…..for La Hawla wala Quwatta Illah Billah….there is no power except Allah and He is truly capable of all things… But what did our beloved Prophet (saw) tell us?

He (saw) said in one hadith,

“By Him in Whose Hand my life is, you either enjoin good and forbid evil, or Allah will certainly soon send His punishment to you. Then you will make supplication and it will not be accepted.”

So what is the Marouf (good) that we must command, and the Munkar (evil) that we must Forbid to bring an END to this bloodbath for good Insha Allah? We must command the urgent establishment of the System of Allah, the Khilafah (Caliphate) based upon the method of the Prophethood, which is the shield of the Ummah….as the Prophet (saw) said,

“Verily the Imam (Khaleefah) is a shield from behind whom you fight and by whom you are protected.”

AND we must call for an end to the rule of these despicable regimes in the Muslim world….each and every one of them…who have kept silent to or worse still conspired with Assad and the other enemies of our Deen in the crimes against this Ummah.

–      Regimes such as that in Egypt, Saudi Arabia, Jordan and the Arab Emirates who instead of sending their armies to defend the women and children of Ghouta….send them to slaughter and starve the children of Yemen!

–      Regimes such as that in Turkey, who instead of using its fighter planes and immense arsenal to save the Muslim women and children of Syria…..uses its military to kill their own Kurdish brothers.

–      Regimes such as that in Pakistan, who instead of sending its soldiers to fight the oppressors and killers of this Ummah….send them to fight their Muslim brothers on behalf of the US!

Can there be any doubt that the ONLY way to bring the slaughter of Muslims in Eastern Ghouta and across Syria as well as in so many parts of the world is through the URGENT establishment of the Khilafah, for it is this ISLAMIC LEADERSHIP alone which truly cares for the sanctity of human life and which will be the shield of the believers, unifying the Muslim armies and mobilising them with urgency to put an end to this living hell?!

Is it not blatantly obvious that what the children of Ghouta need is an army to defend their blood and to strike fear into the hearts of their killers?… So I ask you…. is there any state today that you truly believe will send its army to do this? NO! Because hundreds of thousands of Muslims have been killed in Syria over the past 7 years and yet we have seen nothing!

We know that it is ONLY an army mobilised by a sincere Islamic leadership that will protect the Believers! Indeed, it is due to the absence of the Khilafah that the tyrants and killers of Muslims in this world have been given a free-hand to terrorize and slaughter the children of this Ummah. This cannot be allowed to continue!

If we as an Ummah do not focus our attention, time and efforts firmly on this true solution….the urgent establishment of the Khilafah…..that will put an end to this nightmare for good….then unfortunately we will continue to see the slaughter of Muslims in Ghouta and across Syria, AND repeated in land after land after land! Please do NOT see the Khilafah as a long-term vision, to be established in the distant future. NO! It is an urgent necessity NOW….and while we distract ourselves with patchwork, plaster strip initiatives OR put hope in failed self-serving western and international plans and processes…..we simply prolong the suffering of our Ummah!

So, in light of the heart-breaking atrocities we see in Ghouta, the Women’s Section in the Central Media Office of Hizb ut Tahrir have launched an online campaign under the title, “Who will defend the children of Ghouta?”, that will urge the Muslims, those of influence in the Ummah – the media, the scholars, the imams and others as well as those in the Muslim armies to establish with urgency the Khilafah based upon the method of the Prophethood.

We call you to support this campaign by sharing its material far and wide which you can access on the Women and Shariah Facebook page. But importantly we call you to intensively carry the dawah for the Khilafah to all you know – your friends, family, contacts, networks, community, society….and especially those of influence you know, including those in armies of the Muslim world – do not leave any stone unturned or any opportunity lost! Please brothers and sisters…Do not delay, do it NOW! For have we not witnessed enough of the bloodshed of our Ummah!?

My final message is to those of Iman in the Muslim Armies. O sons of the Muslim Armies! O you who have the military power to end this bloodbath of the believers! How much more of this slaughter do you need to witness before you rise to the obligation that Allah (swt) has placed upon your shoulders to protect this Ummah from its oppressors??? Does the terror and anguish in the eyes of the children of Ghouta not tear your heart? Do the cries of their mothers not haunt your mind? Do you think that any excuse will be acceptable, when you face your Rabb, for having abandoned them?

You are the descendants of the great generals: Khalid bin Walid, Salahuddin al-Ayubi, Mohammad Al Faatih, Muhammad ibn Qasim…So why do you demean yourself by feeling that you owe even an iota of allegiance to these criminals and cowards you call your leaders when these traitors have abandoned the Muslims and colluded with the enemies of your Deen in the crimes against your Ummah!? O sons of the Muslim armies! Break your allegiance to these traitors and respond to the command of your Creator to become the defenders of your Ummah and to give your Nussrah, your material support for the establishment of the Khilafah!

Embrace the honour of becoming the Ansar of today and the army of the second Khilafah Rashidah so that you will become the heroes of this Ummah and Insha Allah secure the greatest of rewards in the Akhira! And Allah (swt) says,