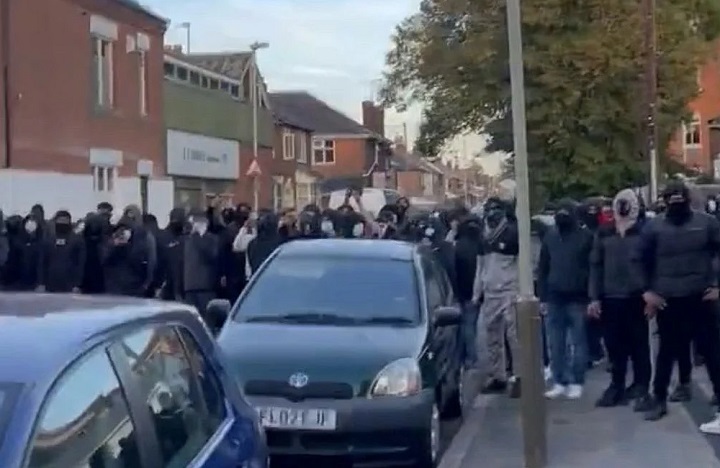 The Hindu and Muslim community in Leicester have coexisted since the 1960s without trouble. Local temples for Hindu and Jain communities have condemned the Hindutva inspired violence.

The real cause of the tensions isn’t local but external; a racist ideology, Hindutva, which was espoused originally by the RSS; an Indian Hindu supremacist paramilitary organisation who propagate hatred towards Islam and other religious minorities. The RSS and their benefactors in the Indian government incite violence against religious minorities in India, stoking riots, massacres and acts of terrorism. Many Muslims have been attacked and lynched by RSS mobs across India, with mosques, women wearing hijabs and Muslim businesses all targeted. The core ideology of RSS, is a Greater India, which is best served by expunging Islam and Muslims out of India and extending territorial gains beyond India’s current borders. Hindutva objectives are summarised in their own slogan “there’s only two places for Muslims to go: either Pakistan or qabrestan (graveyard)”. The RSS was founded by men who were inspired by Mussolini’s fascism and the Zionist project in Palestine. Not content with their oppression on the streets of India, they now seek to export this fascism under a smokescreen of Hinduphobia to the streets of Britain, operating under the name HSS.

Hindutva voices referring to how countries like Pakistan, Saudi Arabia or Iran treat minorities are smokescreens as no-one credibly views their systems as Islamic. The former has been hijacked by politicians more interested in looting the country while the latter two have regimes that are more interested in stoking up sectarian tensions in the Middle East. All of them do this in service of Western colonialists and definitely not for Islam.

Leicester today, once again exposes the lack of principled Muslim leadership in the world. The Indian High Commission and local leaders stand up for their own racist interests, while the Modi regime uses its influence in the British establishment to divert attention from its nefarious support for Hindutva aims. Yet the lack of sincere leadership of the Islamic Ummah in the world, which is willing to defend Muslims and Islam, is again painfully clear to see.

One must question who is behind the Hindutva incitement in Leicester? It bears the hallmark of a staged event, so we need to ask who benefits from it? Has it been done to provoke the Muslim community to get a reaction? Has it been arranged by the Hindutva government of India for an undeclared agenda?

Moreover, HOW is it allowed to happen? Why are weapon-carrying thugs left alone with their faces hidden? Why have the police not commented if weapons were indeed seized, as eyewitnesses have claimed?

Muslims need to be aware of the wider Hindutva plans, in order that we do not walk into their traps and inadvertently serve their aims. Islam teaches us to defend ourselves, the weak and oppressed, but it forbids attacking ordinary citizens for revenge. The Islamic evidences regarding a Muslim’s duty to protect the blood, property and rights of non-Muslim citizens expose the lie that is the Hindutva narrative that alleges Islam as the problem. History is replete with stories of Muslims protecting Jews, Christians and even Hindus. The Jews have been saved multiple times from Christian brutality and the presence of hundreds of millions of Hindus in India give lie to the allegation that Muslims seek to destroy all other religions by force.

Secular democracies gleefully eliminated God from politics, yet their inbox of problems continues to explode. In 2022 stubborn secularists have no answer to any of the big problems that we face today. Racism remains rife and the growth of the ‘Alt’ and far right in India as well as Europe and America demonstrates the bankruptcy of today’s politics. Instead of enlightened solutions we have wanton vandalism, instead of clear facts we have establishment spin, instead of bringing communities together we see the interfering spectre of government agents supporting one racial group over another.

The only way to put divisive secularism or hate filled world views like Hindutva and Zionism in their place is for a sincere Islamic leadership to be established. Only the Islamic Khilafah (Caliphate) on the way of Prophethood has the values, solutions and historical track record to bring different communities together, living prosperously and peacefully alongside one another. Until this leadership is established globally, Muslims in Britain, who are already being treated as second class citizens under new citizenship laws, will continue to be thrown to the wolves.

“This day have I perfected for you your religion and completed my favour on you and chosen for you Islam as a religion.” [TMQ (5):3]