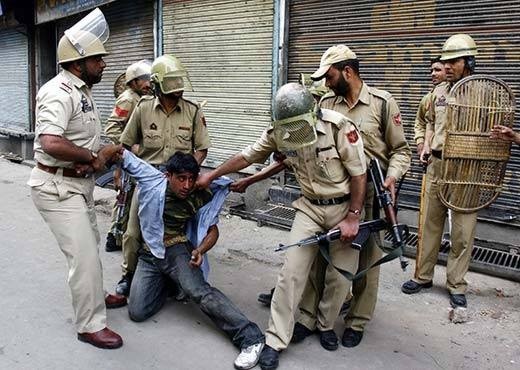 In the last few days, a debate has erupted after an interview on 27th September 2018 to Al Jazeera Television, in which Pakistan’s Foreign Minister Shah Mehmood Qureshi said while referring to the Kashmir dispute, “War is no option. There is no military solution. The only solution is a dialogue.” In recent weeks, on America’s behest and encouragement, Pakistan’s treacherous rulers have stepped up a campaign to prepare domestic opinion for an ultimate betrayal of the Kashmir cause by misleading the masses about the ability of the Pakistani State to liberate occupied Kashmir from the clutches of Hindu occupation. In doing so Pakistan’s political and military leadership reveal their loyalty to Western ideals and the solutions, which the West dictates to them for our problems. These rulers parrot the words of their Western masters bringing excuses for their inaction in support of oppressed Muslims of the Valley who despite their meagre means are defying the oppressive Hindu occupation through an armed resistance which has only gained in strength after the martyrdom of Burhan Wani.

Pakistan’s rulers refuse to arm the resistance in Kashmir although it is now widespread and strong, after seven decades of the occupation and which has clearly frustrated the occupying Hindu Armed Forces. These rulers refuse to arm the resistance in Kashmir because they obediently follow American dictates which has labelled the resistance as “Terrorism”. These rulers fear angering the “international community” which has no interest in resolving the Kashmir dispute. This lack of interest of the “international community” in resolving the Kashmir dispute was openly signaled by the UN Security Council through its resolutions on Kashmir which were issued under the non-binding Chapter VI of the UN Charter instead of binding and enforceable resolutions under Chapter VII. Yet Pakistan’s rulers present these resolutions as a solution to the Kashmir dispute knowing fully that the value of such resolutions is not worth the paper they were written on. Allah (swt) said, أَلَمْ تَرَ إِلَى الَّذِينَ يَزْعُمُونَ أَنَّهُمْ آمَنُواْ بِمَا أُنزِلَ إِلَيْكَ وَمَا أُنزِلَ مِن قَبْلِكَ يُرِيدُونَ أَن يَتَحَاكَمُواْ إِلَى الطَّاغُوتِ وَقَدْ أُمِرُواْ أَن يَكْفُرُواْ بِهِ وَيُرِيدُ الشَّيْطَانُ أَن يُضِلَّهُمْ ضَلاَلاً بَعِيدًا “Have you seen those who pretend to believe in what has been revealed to you and what has been revealed before you, how they go in their judgment to the Taghut, though they have been ordered to disbelieve in it. But Shaytan’s wish is to lead them astray” [Surah An-Nisa’a 4:60]

War is not an option for Pakistan’s ruling elite because they hold on dearly to the Westphalian ideal of Nation State which blinds them to the suffering of the Muslims of occupied Kashmir because it lies outside the borders imposed by British colonialists. We ask would war still not be an option if Srinagar was Lahore and Lahore was Srinagar? Does the violation of the sanctity and honor of Muslims become acceptable, just because of mere geography? RasulAllah ﷺ said,«مَا مِنْ امْرِئٍ يَخْذُلُ امْرَأً مُسْلِمًا فِي مَوْضِعٍ تُنْتَهَكُ فِيهِ حُرْمَتُهُ وَيُنْتَقَصُ فِيهِ مِنْ عِرْضِهِ إِلَّا خَذَلَهُ اللَّهُ فِي مَوْطِنٍ يُحِبُّ فِيهِ نُصْرَتَهُ وَمَا مِنْ امْرِئٍ يَنْصُرُ مُسْلِمًا فِي مَوْضِعٍ يُنْتَقَصُ فِيهِ مِنْ عِرْضِهِ وَيُنْتَهَكُ فِيهِ مِنْ حُرْمَتِهِ إِلَّا نَصَرَهُ اللَّهُ فِي مَوْطِنٍ يُحِبُّ نُصْرَتَهُ» “No (Muslim) man will abandon a man who is a Muslim in a place where his sanctity is violated and his honor attacked without Allah abandoning him in a place where he wishes his help; and no (Muslim) man who supports a Muslim in a place where his honor may be attacked and his sanctity violated without Allah supporting him in a place where he wishes for His support.” [Abu Dawud].

War is not an option for Pakistan’s ruling elite for liberating Kashmir yet when it came to protecting American interests in the region in the form of supporting the American War on Terror and American occupation of Afghanistan the planes, tanks and artillery of the regime mobilized and our troops were used as a fuel, in the War of Fitna which severely harmed Pakistan and its interests.

The Bajwa-Imran regime is misleading the masses through false promises of prosperity which they claim normalization with the Hindu State would bring. It invites us to sell the Muslims of Kashmir for prospects of economic gains. In doing so this regime insults the Muslims of Pakistan who have consistently demonstrated their love for the Islamic Aqeedah and obedience to Allah and His Messenger and who prefer the bonds of brotherhood of Islam over any worldly gains. By calling for normalization with the Hindu State, this regime insults the wisdom and struggle of our forefathers who had rejected living under the authority of the oppressive Hindus and sought a different homeland for Muslims of Pakistan. And this promise of economic prosperity is a false mirage. The European Union which comprises of nations with a common Judeo-Christian Civilization and a belief in Liberal Democracy and Capitalism is crumbling under a similar economic union today, how then do we expect that the Hindu State, which rules by Kufr as a way of life, live peacefully with the people of Pakistan, who are committed to Islam as a way of life? No, the only way for peace and prosperity is for Islam to be restored to dominance over the people of the Indian Subcontinent, as it was for centuries.

O Muslims of Pakistan! The rulers of “change” are no different from the previous rulers in their shamelessness and willingness to bow before the Hindu State. Move now to bring real change in Pakistan by working to establish the Khilafah (Caliphate) on the Method of the Prophethood. The Khalifah of Muslims will implement the vision of Islam for peace which requires that power and authority be in the hands of a just Ummah which rules the region and the world through the laws of Islam. Indeed the subcontinent is no stranger to this vision of peace and prosperity when it was under the rule of Islam. The Khalifah of Muslims will care not for international law, international institutions and the Westphalian borders. He will lead you to honor and dignity, in an organized Jihad through the Armed Forces of Pakistan to liberate Kashmir and further moving to fulfill the glad tidings of Prophet Muhammad ﷺ about the Conquest of Hind. Abu Hurairah (ra) narrated, «وَعَدَنا رسولُ اللّـهِ صلى الله عليه وسلم غزوةَ الهند، فإنْ أدركتُها أُنْفِقْ نفسي ومالي، وإنْ قُتِلْتُ كنتُ أفضلَ الشهداء، وإنْ رجعتُ فأنا أبو هريرة الـمُحَرَّرُ» “The Messenger ﷺ promised us the conquest of India. If I was to come across that, I will spend my soul and my wealth. If I am killed then I am among the best of martyrs, and if I return then I am Abu Huraira the freed” [Ahmad, An-Nisa’i, Al-Hakim].