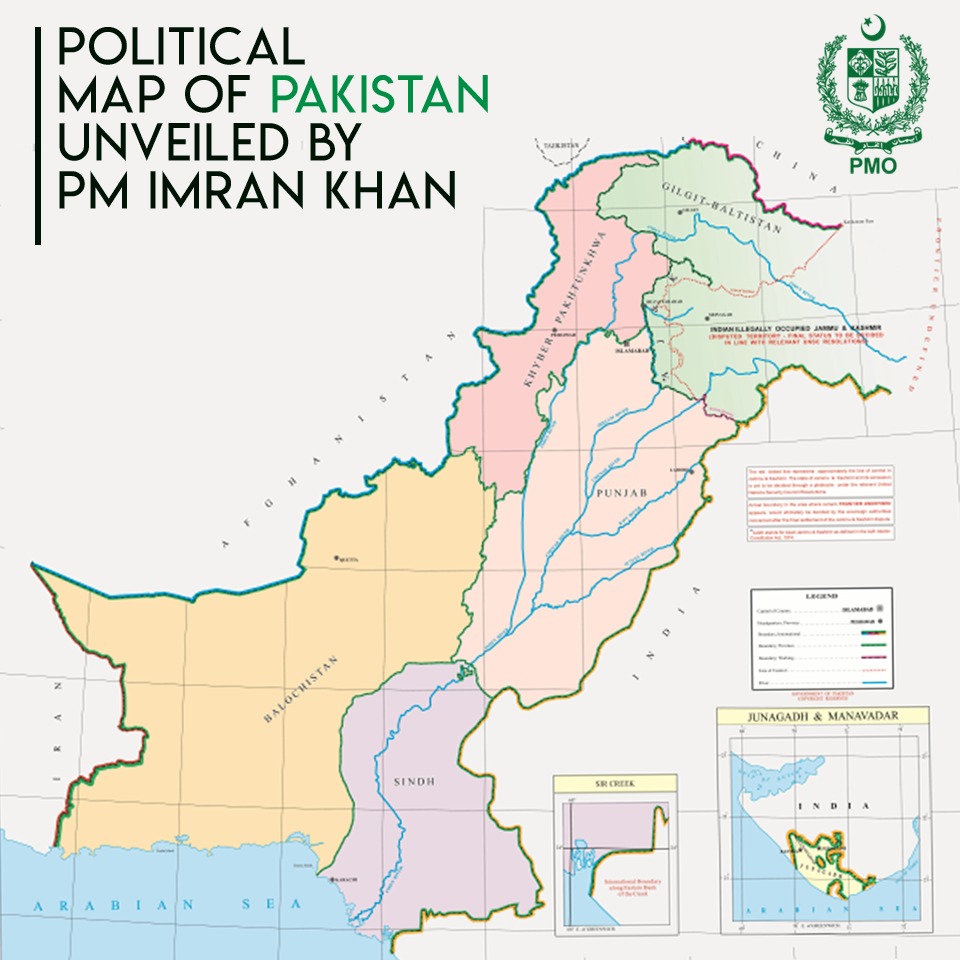 Pakistan’s Prime Minister, Imran Khan, unveiled a “new political map” for Pakistan that also includes Occupied Kashmir, a day before the first anniversary of India’s decision to abolish the semi-autonomy of the region. Ever since Modi’s annexation of Kashmir on 5th August 2019, Pakistan’s hybrid civilian-military regime has come under extreme public pressure to respond to the Hindu State’s belligerence in kind. The regime has tried to respond to the public pressure, through token measures such as; commemorating 5th August as a day of oppression, a public relations campaign on Kashmir highlighting the plight of Muslims of Kashmir, downgrading diplomatic relations with the Hindu State, calling upon US President Donald Trump to put pressure on India with regards to Kashmir and asking the United Nations Security Council to organize a plebiscite in Kashmir to give the Muslims of Kashmir their right to choose between joining India and Pakistan, a solution which is rooted in the unfinished partition of the Indian Subcontinent.

All of these token measures have been overwhelmingly rejected by the majority of Muslims in Pakistan. The Muslims of Pakistan are politically aware and the wave of Islamic revival sweeping across the Muslim World has powerfully impacted the Pakistani society. The society in Pakistan now views most of its interests and issues from the prism of the Islamic ideology, seeking solutions extracted from Islam. What compounds the problem for Pakistan’s treacherous rulers, is the special place and love which the Muslims of Pakistan have towards Kashmir. With Azad (Liberated) Kashmir fully integrated within mainstream Pakistan, the pain of Kashmir and the suffering of its people is felt directly by many in Pakistan. The Muslims of Pakistan have bled for the sake of Kashmir, happily providing their sons for the Kashmir Jihad of the 1990s and this is a source of pride and honor for them. The idea of liberating Kashmir through Jihad is deeply rooted in Pakistani society. Since Modi’s annexation of Kashmir, the Pakistani society has angrily rejected the inaction of the Pakistani government over Kashmir. Prominent personalities in Pakistan have openly called for using military force to liberate Kashmir.

The issue of Kashmir also has a special significance for Pakistan’s Armed Forces which see in India a polytheist enemy which is a perpetual enemy of a nation which believes in Tauheed. This decades old animosity has crystallized over the military conflict over Kashmir. Kashmir is thus as much an issue of Islamic lands under occupation as it is an issue of prestige and pride for Pakistani soldiers. Modi’s annexation of Kashmir on 5th August 2019 and Bajwa-Imran regime’s inaction and open refusal to respond militarily to the Hindu State’s provocation has thus infuriated Pakistan’s Armed Forces who have felt humiliated at being dealt a bad hand by an enemy which it despises like non other. This anger has not faded away and scares the Pakistani regime which keeps on trying to find novel ways to fool and deceive the Muslims of Pakistan and their Armed Forces over the issue of Kashmir.

The new political map released by the Pakistani regime is just another such attempt to present itself as the defender of the Kashmir cause. Witnessing the anger and humiliation felt in India when the Nepalese parliament passed a map, showing disputed border regions with India as its own, the Pakistani regime adopted the idea from Nepal, in the hope that this will showcase its seriousness on the issue of Kashmir and protect it from public anger. However the action of the Nepalese government created regional ripples because Nepal is traditionally seen as a country too weak to stand up to India and had always toed the Indian line. So when, with Chinese backing, the Nepalese government challenged the Indian government politically by issuing a new political map, it was seen as Nepal breaking from past precedent and defying India on behalf of China. This was viewed as a significant event because China, Nepal and India share the common disputed border and Nepal’s action meant it is seeking Chinese support for protecting its own interests. Pakistan on the other hand is a regional power historically seen as an equal to India. A nuclear armed nation with a powerful military and a history of military engagements with the Hindu State. Thus, when the Pakistani regime released a political map of Pakistan showing Occupied Kashmir as part of Pakistan, while clearly declaring that it will not use military force to back this political map, the Pakistani regime became a laughing stock. It was an object of further public scorn, ridicule and criticism for engaging in gimmicks and cosmetic actions, which have no impact on the ground realities or regional balance of power. Such is the clarity in the Pakistani society as to what needs to be done on Kashmir to resolve the issue, Jihad by Pakistan’s armed forces.

The release of the new political map by the Pakistani regime, and its rejection by Muslims of Pakistan, is yet another evidence that the gap between the Pakistani society and the current rulers is at its maximum. The Muslims of Pakistan love Islam and want to be ruled by Shariah law. They want to see the State of Islam, the Khilafah (Caliphate) on the Method of the Prophethood, which will rule by all that Allah (swt) has revealed, implement Islam’s solutions to our problems and mobilize our armed forces to liberate Kashmir and Palestine.

“Yet you see those in whose hearts is a sickness rushing to them, saying, ‘We fear lest a turn of fortune should visit us.’ Maybe Allah will bring about a victory, or a command from Him, and then they will be regretful for what they kept secret in their hearts.” [Surah Al-Maida 5:52]