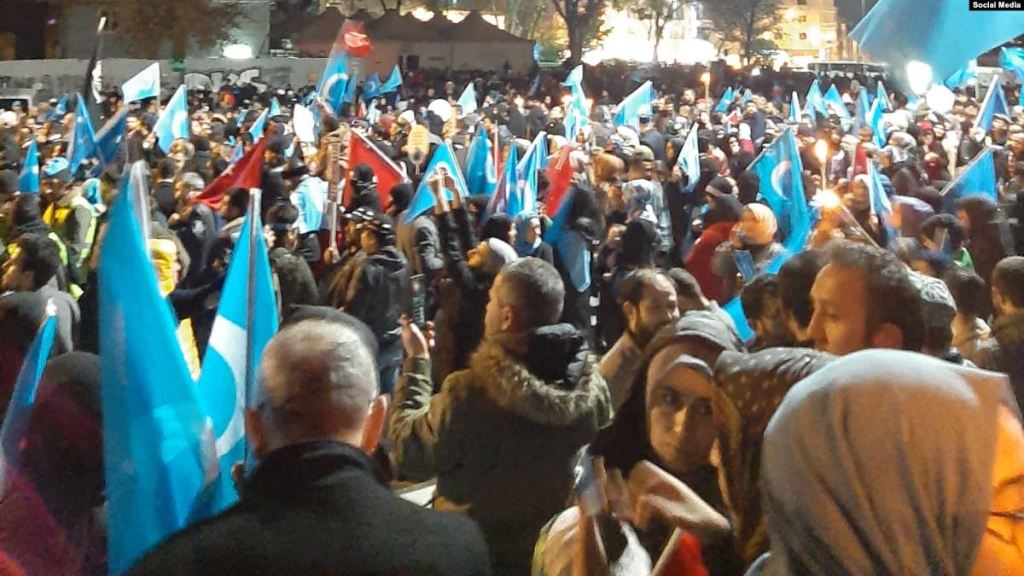 On December 20th a mass demonstration was held in the center of Istanbul, during which participants demanded to protect Muslims of Xinjiang. (Source: idelreal.org)

In last weeks, a lot of demonstrations were held in support of Muslims in China that are suppressed by the Chinese regime (Uygurs, Kazahs, Uzbeks, Kyrgyzs and other Muslim nations). We witnessed these activities in different parts of the Islamic and non-Islamic world.

Such reaction of the Islamic Ummah is a praiseworthy act since it fully corresponds merits that are mentioned by Allah (swt) in Quran: كُنْتُمْ خَيْرَ أُمَّةٍ أُخْرِجَتْ لِلنَّاسِ تَأْمُرُونَ بِالْمَعْرُوفِ وَتَنْهَوْنَ عَنِ الْمُنْكَرِ وَتُؤْمِنُونَ بِاللَّهِ “You are the best of peoples ever raised up for mankind; you enjoin Al-Ma’ruf  and forbid Al-Munkar, and you believe in Allah”. [3:110].

Beside this positive reaction of the Islamic Ummah, it is worse to mention a negative trend that is seen among some Muslims.

Unfortunately, we witness a situation when some religious figures, muftis, imams and Muslims while supporting Muslims of Eastern Turkestan remain silent in front of repressions that are faced by Muslims of their own countries.

For instance, we see some Muslim religious figures in Russia who criticize China for its policy against Uygurs while they stay silent against the persecution of Muslims inside Russia by its authorities.

This situation is paradoxical since Russia persecutes Muslims under the same excuse as China – notorious struggle against extremism and terrorism, which aims at the destruction of the Islamic identity among Muslims.

Undoubtedly such double standards of these figures, when they suppose to bring benefit to Islam by these halved measures (criticizing repressions abroad while paying zero attention to crimes that are done against Muslims at home) are absolutely inappropriate, inconsistent and more over harmful for the interests of Muslims.

Such silence would be appropriate if there were no repressions against Muslims in Russia, such as problems with wearing khimar in schools; if there were no violent abductions, tortures, extrajudicial executions, and two-figure prison terms for Islamic dawah carriers only for discussing Islam in their homes.

Moreover such wrong attitude brings these people to speak only about salah, fasting, hajj, explaining ayahs and hadiths beside absolute dropping of repressions that occur on neighbouring streets.

This deprived any Islamic spirit is nothing else but harm for Muslims and the interests of the Islamic Ummah, since it twists true Islamic attitude to this reality, twists Islamic values, creates illusion of welfare, legitimates indifference to own Muslim brothers, brings fitna and vagueness in what should be done by Muslims today.

If we are to talk about Muslim countries, then our Islamic brotherhood should not be determined by artificial borders drawn after Sykes-Picot, when we support Muslims in other Muslim countries but stay deaf to repressions against our Muslim brothers in own country.

If we are to talk about repressions in non-Muslim countries, for instance in Russia, then our Islamic brotherhood should not be determined by fear of secret services to knock our door next morning after we support Muslims in Russia. Today unfortunately we see that support of own Muslim brother for some among us to be determined by Russian penal code or Russian secret services, while we surely know that brotherhood in Islam is determined only by Quran and Sunnah.

We call all religious figures and Muslims that are corrupted by such approach to change it according to demands of Islam.

In other way, such Muslims that divide own brothers by forbidden division will be among those whom Allah mentions in the following ayah:

“Then do you believe in a part of the Scripture and reject the rest? Then what is the recompense of those who do so among you, except disgrace in the life of this world, and on the Day of Resurrection they shall be consigned to the most grievous torment”. [2:85]