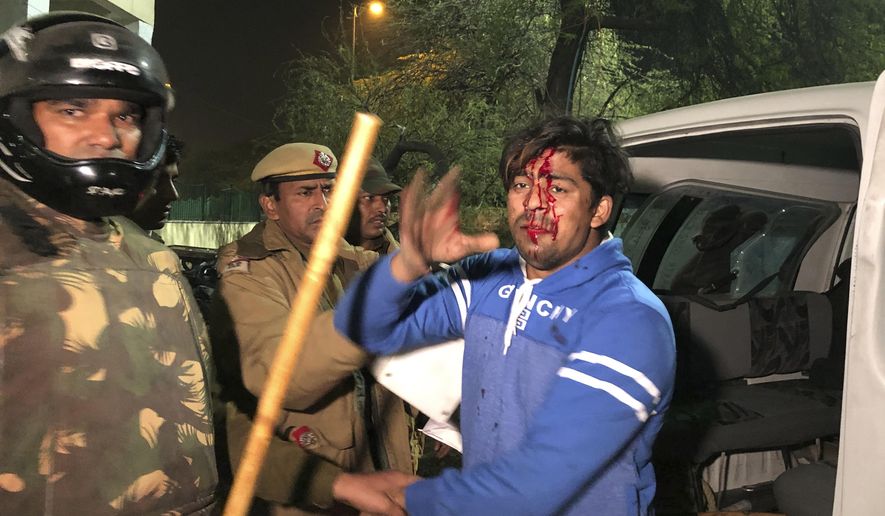 Students of the Islamic University in the Indian capital, New Delhi launched protests against the Citizenship Amendment Act that was passed by the parliament in December 2019. This act facilitates citizenship for Afghans, Pakistanis and Bengalis who lived in India for five years on the condition that they are not Muslims. The new act passed by the parliament opens the door for religious minorities, such as Hindus and Christians from Bangladesh, Pakistan and Afghanistan, who settled in India before 2015, to get Indian citizenship, upon the basis that they faced persecution in those countries.

Since the formal independence of India from Britain in 1947, and the installation of agent rulers of Britain, who ruled India with canons and constitution drawn by Britain itself, Britain was satisfied with the loyalty of India through an agent political medium. Since then India had been working hard to lead a normal life in its Islamic environment, which was influenced by the long history of its having been ruled by Islam. The primary party that ruled India was the Congress Party, whilst the Bharatiya Janata Party (BJP) was a small opposition party, along with some other small parties. The BJP was founded by the English from the same political medium which was loyal to them, such that democratization was completed by the democratic systems of ruling.

However, with the effective weakening of Britain’s interests and its weakness in influencing the international situation, along with the American entry and its hegemony over the international situation, America managed to win over the members of the political medium, particularly within the BJP, who present themselves as Hindu nationalists. This occurred during the time of Bill Clinton, through electronic companies that emerged significantly in the global markets during his time. Bangalore city became an electronic city, which was called the “Indian Silicon Valley.” Since the Bharatiya Janata Party reached power with strong support from America in the year 1996, American interests began to compete with the interests of Britain in India. America began to use India to implement its projects in the region. The important projects for the US is both the curtailment of China and preventing the emergence of Islam in the surrounding nations, such as Pakistan, Bangladesh and Afghanistan.

In order for India to realize these two goals, America provided India with various means for power and regional hegemony. So India concluded various political, economic and military agreements with Bangladesh, until observers thought that Bangladesh became subordinate to India, whilst it is British wholeheartedly. America worked to normalize the relationships between India and Pakistan through the American agent rulers of Pakistan, to the extent that Pakistan’s rulers abandoned Kashmir in favor of India. This was in order to give India the regional impetus, where India appears to be a strong nation that proceeds towards what it sees as appropriate for its interest, without fear and reckoning from its sworn enemy, Pakistan, despite the superiority of Pakistan’s military over India at various levels.

America allowed India to be present in Afghanistan after it occupied it. After Modi has won the latest election of this year, with Trump in the White House and the continuation of the global crusade against Islam under the leadership of Trump, circumstances encouraged the Indian government to carry out actions against Muslims to serve its interests and American interests in the region. In this context, the stance and motive of India behind the enactment of this racist law against Muslims, as well as the annexation of Kashmir, become clarified.

Despite the large geographical size of India and its population, which is over a billion, India is a fragmented and weak state, as it is a country which is based on ethnic groupings and hundreds of token religions. This makes conflicts and disintegration in the social fabric as a general characteristic of the state. Despite the country’s richness in natural resources, most of its people are in poverty due to the capitalist system applied by the state, widespread corruption within the state, as a legacy of the corruption of the British colonialist era.  Despite these weaknesses, America and Britain wanted India to play a regional hegemonic role and gave it the means of artificial power that enabled it to play this role. Had it not been for the inaction and treachery of the Arab and Muslim rulers, who paved the way for it to become “Greater India,” India would have not gained strength against the Muslims there and against Occupied Kashmir.

Pakistan alone can put an end to Indian aspirations, if Pakistan’s leadership is loyal to Allah (swt), His Messenger ﷺ and the Ummah. The Gulf States, who keep millions of dollars of Indian investment, besides millions of Indian workers and businessmen, could have imposed the will of Muslims in India and outside, against this racist state. The Hindu State resembles the Jewish entity to a great extent and the resemblance is almost identical. Both nations are artificial, as the Jewish entity was formed as cancerous foreign body in the heart of Islamic world, whilst the Hindu State is like the cancerous body in the loin of the Ummah’s body. Neither the Jewish entity nor the Hindu State have social and cultural roots, nor do they have a deep history. The current Indian state established upon the Hindu regional minority is based upon the political movement created by Britain in India, just as Britain created Zionism in the world. Hinduism was originally an insignificant religion that had no influence in life or politics. However, the English with their wickedness politicized this group to confront Islam and Muslims in the Indian Subcontinent. The following this erroneous belief or movement is now lead by the Bharatiya Janata Party. BJP’s state is too weak to become an independent state, in addition to being a pivotal regional state.

It is true that this racist law will have no repercussion on the Muslims either inside or outside. Instead it affirms the racism of this state. However, it has political significance as its passage will encourage the state to increase racist actions against the Muslims within. Islam and Muslims do not in origin recognize the legitimacy of the current Hindu State over the lands of Hind, as India was opened and ruled by Muslims for many centuries. So how can Muslims merely lament over the nationalism of this racist state? Had it not been the submissiveness of the Ruwaibida (ignoble) rulers in the heart of the Islamic Ummah and the absence of a Khalifah Rashid (Righteous) who will truly represent the Ummah and protect it, cow worshippers would have dared to alter the status of the best nation ever brought forth to humankind. This situation is another motive for Muslims in the Indian Subcontinent to work tirelessly to restore the Khilafah in their lands, so that they enjoy the justice of Islam and seek enlightenment from it, true to the Hadith of RasulAllah ﷺ, «إِنَّمَا الْإِمَامُ جُنَّةٌ يُقَاتَلُ مِنْ وَرَائِهِ وَيُتَّقَى بِهِ» “Verily Imam is shield behind whom they fight and behind whom they get protected”.