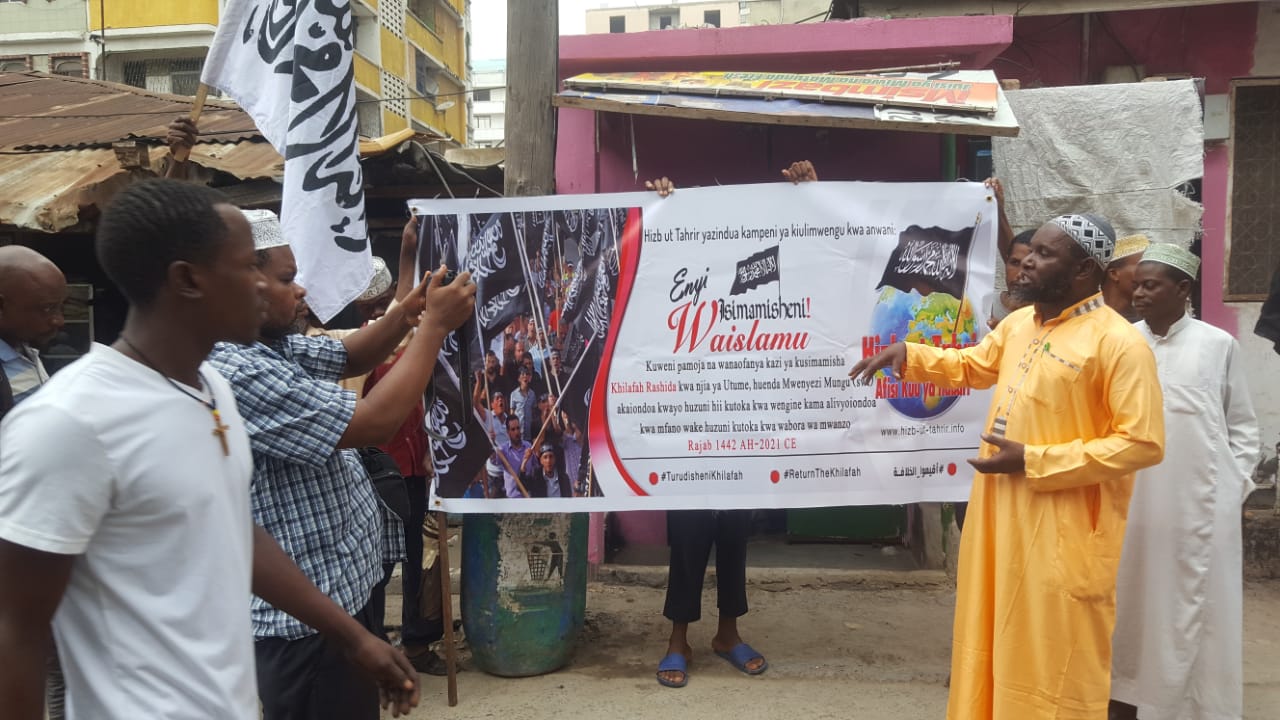 On 01 Rajab 1442 Hijri corresponding to 13 February 2021 CE, activists of Hizb ut Tahrir/ Tanzania held picketing events in several regions to officially launch the campaign titled, “Centenary of the Destruction of the Khilafah;” the destruction that took place in Rajab 1342 Hijri / March 1924 CE.

Comment:
For Muslims in Africa, as part of the global Islamic Ummah and Africa being the first continent to be reached by Islam after Arabs, these 100 years without Khilafah means a lot.

Islam reached Africa in a very early period, when the Prophet Muhammad (saw) sent some of his companions to Abyssinia under the leadership of Jaffar (ra). During that time, apart of Africa embraced Islam, and later then became part of Khilafah during the reign of Umar Ibn Khattab (ra) upon the opening of Egypt on 20 Hijri (641CE), Libya on 21 Hijri (642) then Tunisia on the reign of Uthman Ibn Affan (ra) on 27 Hijri (647CE). Islam continued to spread in the whole continent via trading and interactions.

The Khilafah brought huge contribution in Africa in terms of civilization, education, languages etc. When people of East Africa had an interaction with other Muslims, especially from the Khilafah Banu Abbas (The Abbasid Caliphate), this led to the formation of lingua franca called ‘Kiswahili’ (Swahili language) that came from Arabic word “sahil” which means “coast”.

Swahili language mixed with bulk of words from Arabic and made the East African coast community to enjoy a high level of literacy for centuries, speaking Swahili while using Arabic letters as their medium of writing until in 1960’s abolished by British and replaced by roman letters.

African Muslim city states such, as Kilwa and Zanzibar in East African coast (Tanzania), were greatly built. Ibn Batuta, the great Muslim explorer explained it (Kilwa) as “One of the finest and most beautiful towns” (A Masterpiece to Those who contemplate the Wonders of cities and the Marvels of Travelling)

When some parts of Africa were part of the Khalifah, Muslims and non-Muslims were well protected, taught Islam and other skills to the extent that they inherited multiple skills and arts. What can still be openly witnessed today is architecture skills from the buildings in different places like Masjid Sahaba (Masawa, Eretria), Masjid Qiblatain (Zeila, Somalia), Masjid Najash (Negash, Ethiopia), Masjid Amr Ibn Al ‘As (Cairo, Egypt) which were built on 610CE, 620CE, 630CE and 641CE respectively and many other buildings.

Many Muslim cities states developed in Africa, such as in Mali, Ghana, Kilwa, Gao, Timbuktu, a few to mention. Some of these were greatly influenced by the Khilafah in Africa. This led a great deal in trade, and rich, powerful states and cities with Islamic sense were formulated.

On 895 CE, the first ever known university in the world, which is now known as The University of Al Qurawiyin, was built in Africa (Morocco) by a woman, Fatma Bint Muhammad Al Fihriya which accommodated a great number of African students aand foreigners as well.

Therefore, during the Caliphate era, Africa developed greatly but with the weakening of the Caliphate on the beginning of 19th CE, and finally abolition in 1924, Africa was made a home of capitalists Kuffar, partitioned and exploited its abundance resources, causing endless wars all over the continent. Africa fell under the arms of greedy capitalist, and all developments achieved before were harshly destroyed, not to mention slave trade upon which Africans were taken captives and enslaved in Europeans plantations and industries in America and the Caribbean.

Even after Africa attained “flag independence” from 1960s, capitalists continued to colonize Africa through neo colonialism using fellow Africans to rule on their behalf, utilizing colonial organizations such as UN, WB, IMF, AU, etc. to impoverish Africa. Today Africa has been made to be a home of poverty with highly indebted. Sub Saharan Africa total long-term external debt reached $493 billion in 2018 from $181 billion in 2008 (International Debt Statistics 2020, World Bank Group).

African cannot get out of poverty and stagnation circle under colonial capitalism, but under Islam with its Khilafah state, it is possible as once happened.

During this global campaign of the Centenary of the Destruction of the Khilafah, we call upon the people of Africa, from South Africa to Egypt, from Senegal to Somalia, that the only way to break colonial shackles of colonialism and to be able to prosper is through Islam under its Islamic Caliphate. So, march with Hizb ut Tahrir in working with and supporting it, since is capable of truly liberating Muslims and humanity through Islam.