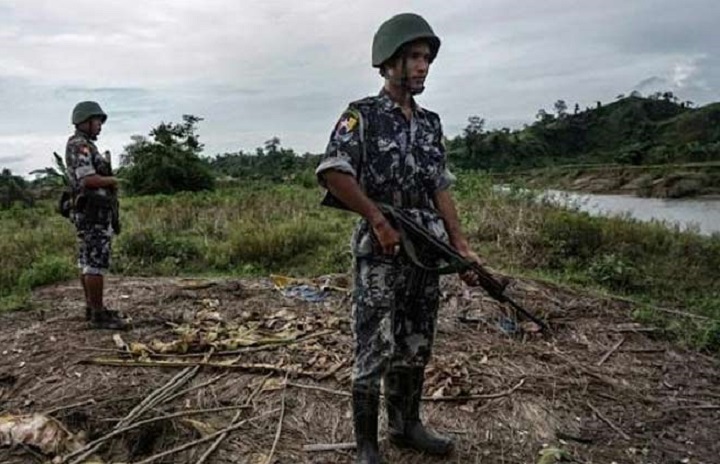 Hizb ut Tahrir/ Wilayah Bangladesh today (23/09/2022) on Friday after Jumma Prayer organized rallies in different mosque premises of Dhaka and Chittagong cities to protest the government’s so-called restraint policy against Myanmar’s continued mortar attacks and killings on the Bangladesh border. Below is the main part of the speeches of the speakers in the rallies:

O People! On the night of September 9, a mortar shell fired by the Myanmar army killed a Rohingya youth named Iqbal (17). Earlier on the same day at noon, a Bangladeshi youth’s leg was blown off by a mine explosion in the No Man’s Land bordering Tumbru. But how regrettable it is that even though the country’s sovereignty is threatened by month-long aggression and firings by Myanmar inside Bangladesh, this treacherous regime has not expressed any strong reaction to them, let alone resisting that civil war torn fragile State, but rather has termed it as an internal conflict of Myanmar within their border and sought the intervention of the United Nations and the international community. The Hasina government has shown its ugly face in the past by abandoning the Rohingya Muslims and supporting the butchering Myanmar army. When the Rohingya Muslims fled the hell of Myanmar and took refuge in Bangladesh, the traitorous Hasina government “caged” the Rohingya refugees and provided ‘security’ to the Myanmar army so that they would not pose any threat to Myanmar! Not only that, they dishonored the honor of our Muslim military by sending them to parade in Myanmar with the Kafir genocidal army. So no matter how much the Myanmar Army invades the border of Bangladesh, Sheikh Hasina will never take a strong stance against them because both Hasina and the Myanmar military junta maintain their loyalty to their colonial master Britain, serving nothing but the geopolitical interest of her master which has always backed the military junta of Myanmar against US interference through Aung San Suu Kyi. Thus Hasina has testified before the Head of the Labour Party Keir Starmer in London on Saturday that she is serving her master’s regional interest by securing the Myanmar regime. She told him that Bangladesh is exercising the ‘utmost restraint’ despite spill-over effects of the conflicts inside its territory (“PM Hasina: Bangladesh is exercising restraint over Myanmar border tension”, Dhaka Tribune, 17 September 2022). An example of the Hasina government’s so-called restraint is that no effective countermeasures have been put in place against the Myanmar army at the border, instead SSC examination centers have been removed from areas near the border.

On the other hand, colonialist America’s so-called interest in Rohingya genocide and their repatriation is not out of her regional geopolitical interests. The sanctions on Myanmar military by the US were never due to any iota of sympathy for the Rohingya refugees, but rather as a ploy to exploit the plight of the Rohingya Muslims to exert pressure on the Myanmar military junta. US Secretary of State Antony J. Blinken recently said that his government is working to significantly increase the resettlement of Rohingya refugees from Bangladesh. So the US is trying to keep the Rohingya refugee issue alive so that it can put pressure on Myanmar’s British-backed military junta. Sadly, the persecuted Rohingya Muslims have become the hated victims of the geopolitical conflict of the Kafir colonialist Britain-US. Even BNP does not have the courage to take a strong stand against the Rohingya genocide in Myanmar or the military intervention of the Myanmar army on the Bangladesh border because like sheikh Hasina, they also play subservient politics. Therefore, like the ruling party, BNP also wants the intervention of the United Nations and the so-called international community to solve the Rohingya crisis in line with US-interest. This is like asking the wolf to protect the sheep! What more we can expect from these traitor secular rulers who are always devoted to protecting the geopolitical interests of their colonial masters US-Britain at the expense of the oppressed Rohingya Muslims and the interests of the country!

O People! Rohingya Muslims are our brothers and sisters, and we cannot fail them due to the impotence of the subservient secular rulers. Rasulullah (saw) said,

“A Muslim is a brother of another Muslim, he will not wrong him, nor surrender him (to the enemy)” (Bukhari and Muslim).

We need to reject this slavish secular leadership and strive for bringing back the second Khilafah Rashidah (rightly-guided Caliphate) State based upon the method of the Prophethood, which will adopt the true interests of the Rohingya Muslims and will bring back Arakan State under the shade of Khilafah to provide them protection and sanctuary.

O Sincere Officers of Military! You are the last refuge of Ummah’s sovereignty. Allah (swt) commands you:

“O you who have believed, fight against those adjacent to you of the disbelievers and let them find in you harshness. And know that Allah is with the righteous” [Surah At-Tawbah: 123].

And the Muslim Ummah knows that you are also ready to obey this command of Allah by giving a befitting reply to the cowardly army of Myanmar. Whereas, this agent regime is creating obstacles for you to follow the command of Allah (swt) by keeping you imprisoned in the barracks to protect the interests of the infidels. So you should overcome these obstacles by removing the current secular agent rulers. Hizb ut Tahrir call upon you, grant nussrah (material support) to Hizb ut Tahrir in establishing the Khilafah (Caliphate) – the Khilafah state will give you the opportunity to fulfil this order of Allah (swt) by sending you to the border of Myanmar for military operations, through which the sovereignty of the Muslim Ummah will be guaranteed.