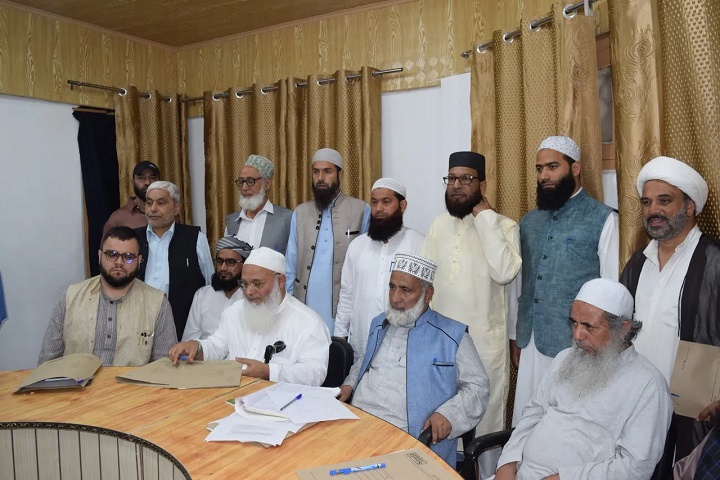 On the 24th of September 2022 the Muttahida Majlis-e-Ulema (MMU), an amalgam of religious and social groups in the Kashmir Valley, on Saturday said attempts were underway “to undermine the Muslim identity of Kashmir”. The MMU organised a meeting in Srinagar’s Jama Masjid to discuss the recent measures to start singing Hindu hymns and Surya Namaskar in educational institutes of the Valley.

Comment:
The 75-year-old struggle of Muslims living under the terror of Indian government oppression has escalated to more radical indoctrination of the youth in a vain attempt to neutralize Islamic sentiments and the identity of Muslims in the region.

The current actions follow the similar route of China and France to delete the ideas and thoughts that make Muslims strong and powerful against the acts of humiliation and fear mongering used to control the Ummah globally.

The spokesperson of MMU said that a joint resolution was passed “to express deep and serious concern over attempts being made to weaken the Muslim identity of this ‘Valley of Saints…. the MMU strongly regrets activities being implemented through schools and educational institutions aimed at furthering the Hindutva agenda in Kashmir. In the name of yoga and morning prayers, Muslim students are made to chant bhajans and at times asked to perform Surya Namaskar. This is against the fundamentals of our religious practices.”

The need of the time is not only a rejection of the new cultural practices being imposed on our children, but a comprehensive system that will allow the complete enforcement of all systems of Islam, not only the education systems. The “Islamic Schools” in the UK face the problem of government officers checking that certain standards are maintained in the teaching practices which can lead to conflict with the Islamic identity of the youth, especially in the matters of gender identity and social relationships. We cannot forget the purpose of the youth to carry the Deen of Haq to the rest of the world, a fact that the enemies of Islam know well. We as the parents must enforce the straight path to Jannat in our youth and need the Khilafah (Caliphate) to protect the purity of knowledge.

“The believers, men and women, are Auliyâ’ (helpers, supporters, friends, protectors) of one another; they enjoin (on the people) Al-Ma‘rûf (i.e. Islâmic Monotheism and all that Islâm orders one to do), and forbid (people) from Al-Munkar (i.e. polytheism and disbelief of all kinds, and all that Islâm has forbidden)” [At-Tawbah: 71]