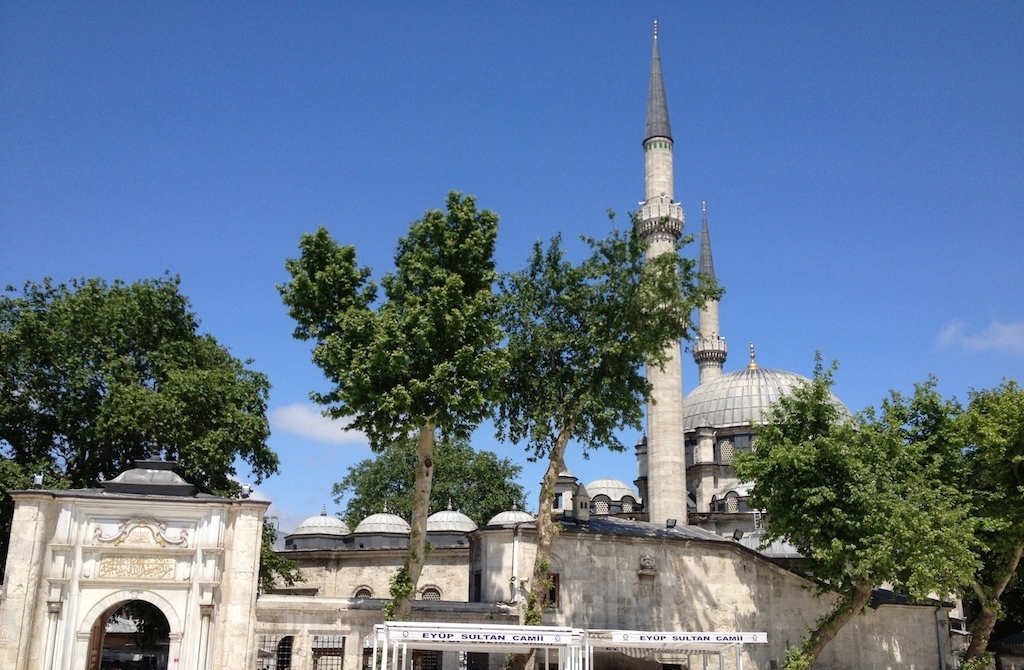 On the 99th anniversary of the demolition of the Khilafah in Istanbul, it is upon us to remember one of the greatest companion of the Prophet ﷺ, Abu Ayyub Al-Ansari, the one who was amongst the main motive for the army of Sultan Fatih to realise the prophecy of Messenger of Allah ﷺ in capturing Constantinople (which later become Istanbul). Abu Ayyub Al-Ansari was a sahabi who supported Allah and His Messenger until his death. After when he gave pledge of allegiance to the Messenger of Allah ﷺ in Aqaba, he fulfilled his pledge of allegiance until his death, neither until the conquest of Mecca nor until the death of Prophet ﷺ. He participated in almost all the expeditions from Battle of Badr to the first attempt of the Muslim armies to open Constantinople. There are great lessons from his life, in particular from his steadfastness in the first battle against Constantinople to the Muslims in general and to the Muslim armies in particular. Some of which are:

1)  Despite being heavy or light, it is upon Muslims in general to carry their dawah and upon Muslim armies in particular to march forth, carrying dawah of Islam to the world and liberating the occupied lands. Abu Ayyub Al-Ansari was at the age of 80 when the Muslim armies first besieged Constantinople. His agedness did not deter him to fight in the path of Allah, as being truthful to the verse of Allah, انْفِرُوا خِفَافًا وَثِقَالًا وَجَاهِدُوا بِأَمْوَالِكُمْ وَأَنْفُسِكُمْ فِي سَبِيلِ اللَّهِ ذَلِكُمْ خَيْرٌ لَكُمْ إِنْ كُنْتُمْ تَعْلَمُونَ “Go forth, whether light or heavy, and strive with your wealth and your lives in the cause of Allah. That is better for you, if you only knew.” [9:41], where agedness is one amongst the heaviness in marching forth in the path of Allah whilst hardships, while little in numbers is amongst the others.

2) It is upon us to bear the burden of achieving the glad tidings of Messenger of Allah ﷺ, hastening to be a part of it without leaving it to others like Imam Mahdi, not to mention our own responsibilities that included resumption of Islamic way of life and carrying it to the world.  Abu Ayyub Al Ansari, despite his agedness, did not wait to let others fulfil the first glad tidings of Messenger of Allah ﷺ regarding the conquest of Constantinople. Rather, he participated in the first expedition of Constantinople, until he died as a martyr out of illness and asked the Muslim army to bury him far closer to the walls of Constantinople, that shows his persistence to realize the glad tidings until he became one amongst those whom the Prophet ﷺ gave glad tidings of their forgiveness.  The Prophet ﷺ said: «أول جيش من أمتي يغزون مدينة قيصر مغفور لهم» “Repentance to first army of my ummah who will fight the city of Qaysar i.e. Constantinople.” (Bukhari)

3) It is upon the Muslims in general and Muslim armies in particular to support Allah and His Messenger irrespective of whether victory is achieved or not. What is required according to sharia is to keep in pace to fulfil the obligations whilst having Tawakkul on Allah upon the victory. Abu Ayyub Al-Ansari along with other Ansars (ra) did not restrict their support to Allah (swt) and His Messenger ﷺ only until conquests were achieved and Islam became dominant during the conquest of Mecca. Rather, they continued their support till their death, being truthful to the saying of Allah (swt), مِّنَ الْمُؤْمِنِينَ رِجَالٌ صَدَقُوا مَا عَاهَدُوا اللَّهَ عَلَيْهِ فَمِنْهُم مَّن قَضَىٰ نَحْبَهُ وَمِنْهُم مَّن يَنتَظِرُ وَمَا بَدَّلُوا تَبْدِيلًا “Of the believers are men who are true to the covenant which they made with Allah: so of them is he who accomplished his vow, and of them is he who yet waits, and they have not changed in the least” (23:33).

Conquests did not persuade him to restrict his support to Allah and His Messenger ﷺ.  When a man from amongst the Muslim army in the first expedition of Constantinople threw himself into the first line of Roman armies, Muslims screamed, “Subhan Allah, he has thrown himself into the destruction”, giving interpretation to the verse of Allah: “do not throw yourselves into destruction” (2:195]“, Abu Ayyub Al Ansari replied by saying destruction is leaving Jihad and refraining to support Allah and His Messenger ﷺ. Abu Ayyub Al Ansari told them, “Oh, you people! You give this interpretation for this ayah, while this ayah was only revealed about us, the people among the Ansar, when Allah made Islam might, and increased its supporters. Some of us secretly said to each other, outside of the presence of the Messenger of Allah ﷺ: “Our wealth has been ruined, and Allah has strengthened Islam, and increased its supporters, so if we tend to our wealth then what we lost of it shall be revitalized for us.” So, Allah, Blessed and Most High, revealed to His Prophet ﷺ, rebuking what we said: ‘And spend in the cause of Allah, and do not throw yourselves into destruction. (2:195)’ So the destruction was tending to the wealth and maintaining it.” Conquest of Mecca did not hinder him to leave Jihad until he came to Constantinople during his death where the seed of victory was sown for the blessed army of Sultan Fatih to get reaped 800 years later.

It may happen to Muslims, particularly dawah carriers, when Nasr (victory) is delayed whilst spending part or whole of their life in dawah. One might have a feeling ‘why don’t we focus in our business or trade at-least, so that we could ensure our sustenance?’, or one might think of his losses in business or trade for the sake of dawah, or his closed people may happen to make him think of such losses. It may happen to the Muslim Armies in particular to think of the consequences when they support Allah and His Messenger as a destruction. Allah (swt) clarified them all that destruction is leaving the Jihad after Islam was made dominant at the hands of the Messenger of Allah ﷺ. Worst is our destruction, when Islam ceased to be dominant today, whilst Muslims in general think of going back to worldly affairs, leaving dawah behind and Muslim armies in particular to think of the consequences of supporting Allah and His Messenger, leaving their obligations as people of power!

Thus, there are great lessons from Abu Ayyub Al-Ansari to the Muslims in general and to the Muslim armies in particular. Ninety-nine years have passed since the destruction of Khilafah on 28 Rajab 1441 AH. It is upon Muslims to work tirelessly in succeeding the project of Khilafah as further as possible, just as Abu Ayyub Al-Ansari who tried to get as close as possible in conquering Constantinople to fulfil the glad tidings of the Prophet ﷺ. And it is upon Muslim armies, in particular, to support Allah and His Messenger in the absence of the Messenger ﷺ, fearing no one but Allah to achieve the rest of glad tidings that included giving Nusra for the establishment of Khilafah.

“Certainly We sent Our Messengers with clear arguments, and sent down with them the Book and the balance in order the people to establish justice; and We have made the iron, wherein is military might and uses to people, in order that Allah knows who helps Him and His Messengers in the absence; surely Allah is Strong, Mighty.” (57:25)