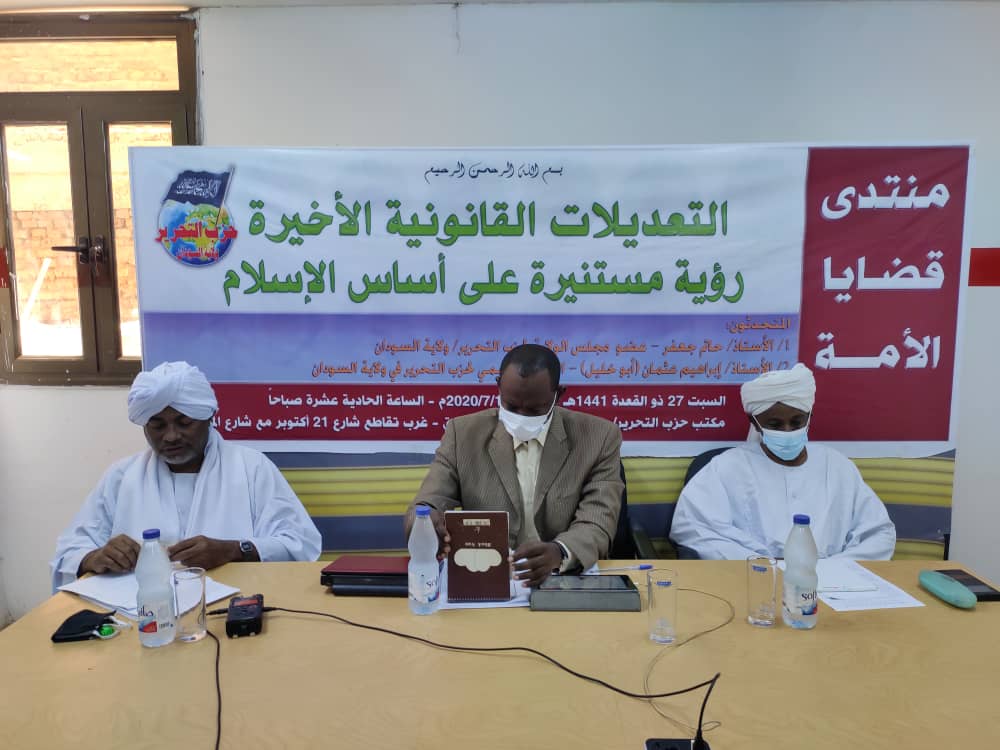 A number of laws were passed in the Official Gazette of the Sudanese Ministry of Justice No. 1904 of 13/7/2020, including the abolition of a number of separate articles in some laws that degrade the value and dignity of women, such as criminalizing female circumcision, and recognizing the right of women to accompany their children if traveling outside Sudan…

In a televised meeting, the Minister of Justice stated that the Personal Status Law would be completely amended or repealed.

And in his tweet, the Minister of Justice considered that these steps are an essential building block for equality between women and men, to establish justice in Sudan and to promote the Sudanese justice system to meet international judicial standards…

Successive governments have accustomed us to the fact that they do not see the observance of women’s rights except when the matter is compatible with the framework of liberal secular thought. As for resolving the sit-down of Fataberno, which has killed a number of women, as well as poverty, hunger, and health degradation, no one pays attention to it!!

And how surprising is it that the people of democracy and freedoms can run away from their own beliefs and establish a binding law with those who consider it a violation of Shar’i provisions that they believe in?! Isn’t imposing restrictions on the freedoms of people like policing thoughts a violation of the sacred principle of freedoms in the constitutional document?! Shouldn’t Muslim women adhere to what they see with complete freedom?!

O advocates of freedoms and liberation: Do you not see the conditions that overburdened and overwhelmed women, those harsh living conditions that brought women out to the revolution which you suddenly hijacked, and women who faced arbitrary arrests, excessive use of force, prison terms and flogging? Do you not see the real demands of women? Do you not see the suffering of the displaced women in the camps from the insecurity and rape in Nertiti and Fataberno, the outbreak of malnutrition diseases among pregnant women and mothers, and the lack of health and education services?! In the capital, Khartoum, also, thousands of women working in the market are required by the competent authorities to pay a sum of money in exchange for a criminal card, in addition to fees and taxes, and those who sell tea and food suffer from declining daily income, with escalating scales and high fines, along with high prices in the market?! All of this and more of the sufferings of women in Sudan did not draw the attention of the revolution government, which needs a revolution to correct its perversions and its attempt to separate women from their religion! The Minister of Justice, and the ones who follow in his path, presents this as one of the most important achievements of the revolution government, which offered nothing but humiliation in the situations that mostly afflict women in Sudan!

Female circumcision and the Personal Status Law are not issues that examine the reality of the extreme suffering of women in Sudan, nor are they issues that affect the solutions to the true sufferings of women in general. As Muslim women, we do not have a difficult issue in Islamic jurisprudence that should be subject to deliberations for the international law to decide on, whose basis is established by those who deny the existence of a relationship between the Lord of the heavens and those on Earth!

O Muslims: You must take a stand that pleases the Lord of the Worlds; which is the rejection of all policies that systematically apply double standards when it comes to men and women, as it comes beyond just female circumcision, but rather is subject to the dictates of the kaffir capitalist West that targets Muslim women in order to subject them to the way the Western women live and get them out of the dress of pride, dignity and honor.

O Muslims: Today is about female circumcision and tomorrow will undoubtedly be something else from the religion of Islam that will be targeted, and the Minister states that the Personal Status Law will be reviewed, so what will you do?

Are you so idle?! How are parts of our Islamic jurisprudence clearly considered undesirable and being attacked?! If you are not angry now, then when will you get angry?!

Then which part of Islam is “permissible for us” to proclaim? Is it just what satisfies the West that attacks all of Islam? Will we reach “Western Islam” devoid of its political, social and economic aspects?! Is this an Islam that satisfies the Creator the Judge?!

The Khilafah Rashidah (rightly guided Caliphate) State on the method of Prophethood is just around the corner, and it will topple all agents subject to the dictates of the enemies of our Deen.