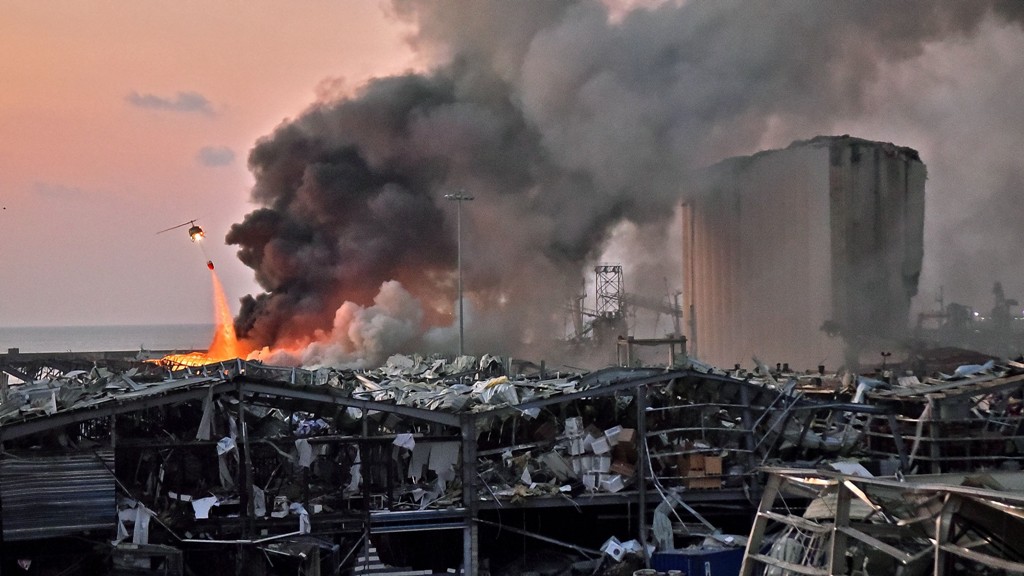 In news published by The New York Times on its website on 10/08/2020, it referred to a diplomatic cable marked sensitive but unclassified issued by the United States Embassy in Lebanon on Friday, that is, after Tuesday’s explosion, 04/08/2020.

This leaked cable indicates that an American security consultant hired by the U.S. military spotted the chemicals during a safety inspection, and he warned at least four years ago about “a large cache of potentially explosive chemicals that was stored in Beirut’s port in unsafe conditions”. According to the cable, (“the consultant, under a contract with the U.S. Army, advised the Lebanese Navy from 2013 to 2016…) and the cable said that: (“The advisor conveyed that he had conducted a port facility inspection on security measures during which he reported to port officials on the unsafe storage of the ammonium nitrate.).

What is more, the leaked sensitive diplomatic cable lists Lebanese officials who knew about ammonium nitrate.

The cable also expressed “doubt about the Lebanese government’s initial explanation about what ignited the ammonium nitrate: that a fire had started in a nearby hangar filled with fireworks and then spread, causing the more devastating ammonium nitrate blast that damaged much of Beirut”. Instead, “the cable raises the possibility that ammunition stored at the port may have created the force needed to set off the ammonium nitrate explosion”. At the same time the cable states that “the cause of the initial fire remains unclear — as does whether fireworks, ammunition or something else stored next to the ammonium nitrate might have been involved”. Current and former American officials who have worked in the Middle East say the contractor would have been expected to report the finding to the U.S. Embassy or Pentagon.

When informed by The Times about the contents of the cable, some diplomats expressed surprise and outrage that if the United States had the information, it was not shared! “If confirmed, it would be very shocking to say the least,” said one Western diplomat whose apartment was damaged in the blast, speaking on the condition of anonymity in accordance with diplomatic protocol.

Therefore, it is not only the corrupt ruling authority that knows, nor only the beneficiaries of these materials, but also their masters in the embassy and in the country of the embassy know that there is a time bomb placed in the capital, yet the authority was silent, and the beneficiary of these materials was silent, because they are cheap, corrupt and fallen, selling and even killing their own people in order for the country to remain a breeding ground for their dirty projects; and their masters, who even did not inform their countrymen, have been silent with them, since it is a game of controlling the country and its people. Even if the price of that was an explosion that ripped through most of the capital, and killed those who were killed, including Western diplomats who live in places overlooking the explosion, while the embassy’s officials and staff live in a compound in Awkar, far from the explosion.

Such news, which is leaked at such times, is for dubious political purposes. We do not see it leaked now except to relieve the pressure on the American governments in Lebanon, as if the cable’s mouthpiece says: It is not only the authorities and governments who knew, but we also knew, and we are America and this is our authority and our governments! So, what are you players doing after the explosion?!

O People of Lebanon: Here you see that those who claim to be protective of you now, from America and elsewhere, knew about the explosive materials, just as the corrupt people in power knew, and none of them moved a finger, as you are not on the list of the priorities, as long as the country is in their hands and they invest it in their projects.

O our People in Lebanon: Trump and Macron, and all Western or local politicians who revolve around them, do not want a real, radical change in Lebanon. Despite their populist rhetoric of radical political change, they thrash their words in the results of their conferences, so that the French says: the formation of a national unity government!! The American says: the formation of a neutral government!! So, who would be in such a formation? Is it of you?! Certainly not, but he is from the same corrupt political class and its leaders, who despite their deep level of responsibility for what happened, Macron met with them without exception, and on one table, urging them to work together!! Is this not a hint but rather a declaration of their survival and a legalization of their existence?!

O our People in Lebanon: Has the time not come for you to be convinced and be aware that this corrupt, ruined political class has no place among you, and that its place now is in the courts and prisons, after uprooting them at your hands and the hands of the faithful, and dumping them in a deep valley?!

O our People in Lebanon: The adversities and crises have multiplied, so rise up and do the work of those who considered these consecutive disasters, the epidemic, high prices, and an explosion of the size of a country… Otherwise, you do not know what will come after this from what the foolish among us have done.

“Do they not see that they are tried every year once or twice but then they do not repent nor do they remember?” [At-Tawba: 126]