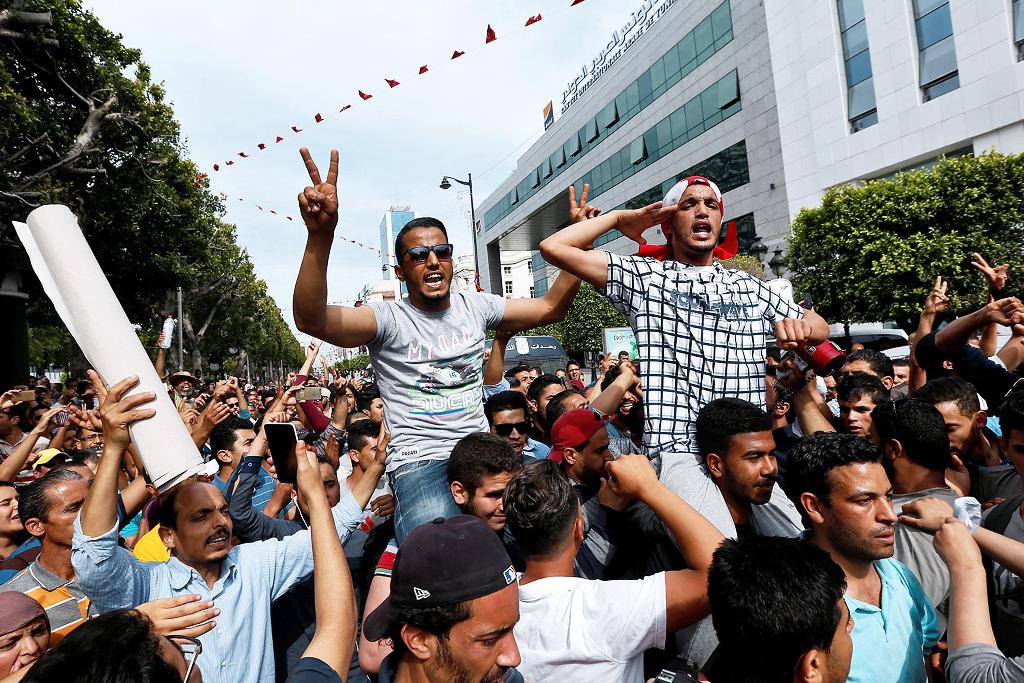 A state of extreme tension and anger in the city of Tataouine, following the break-up of El Kamour sit-in on Sunday night, 21st June, and the arrest of the protestors who demanded the implementation of the 2017 deal between the people of the region and the government of Youssef Chahed, with the guarantee of the Secretary-General of the Labor Union, Noureddine Taboubi, who was present in all the protests targeting mainly foreign companies that plunder the country’s wealth, amid news of security reinforcements flowing into the city, which represents a model of poverty, marginalization, privatization, unemployment, blockage of prospects and regional inequality, where foreign companies have seized its goods and its wealth returned to it bad consequences, only reaping from them narrow livelihoods, damage to the environment, engrained diseases and security grips, which applies to internal authorities without exception. And the saying of the poet applies to them: “Like camels in the desert dying of thirst… while it carries the water right on its back.”

Successive governments have abandoned the duty to take care of people’s affairs, and have been satisfied with the role of a broker with the colonial circles, opened the country wide to the plundering colonial companies under the cover of foreign investment, partnership and privatization, plunged the country into indebtedness, mortgaged the country’s economy to western powers and plunged its people into a spiral of unemployment, deprivation and exclusion, in fulfillment to the conditions of the International Monetary Fund, the actual ruler of the country. And today they thrust the security and military forces to suppress those who demanded them to fulfill their promises, to cover up their inability to recover the country’s wealth and take care of the affairs of their subjects, and governments of this nature nothing will help with it except removal and uprooting.

O People in the beloved Tataouine,

Your ancestors fought an epic battle against French colonialism and its villainous agents in 1956, and chose martyrdom on the tops of the mountains of the villages rather than to accept false independence. So their remembrance is immortalized in the pages of light, and here you are today in front of a great merit that you follow their path and complete what they started, you free the looted riches and restore the stolen willpower, so you truly be the best successor to the best predecessor. And know that your struggle is not with the security forces, but with colonialism and its local tools, so direct the arrows of your anger towards it, and cut the veins of its life from our country. And just as your ancestors equipped with Iman, guide your movement, your goals and the way of your march with Islam, and follow none but the one who made it an ideology for himself, so as not to be a ride and fuel for local, regional or international conflicts. In Islam is your salvation, your liberation and the recovery of your wealth from oil, gas, phosphate mines, salt and other minerals, because Allah has made them public property, the proceeds of which must be distributed to the parish individually, either in kind or in the form of benefits and services.

To thrust you into conflict with your people and members of your own body under the pretext of protecting the people’s wealth is a major crime and an exposed fallacy, because the country’s wealth is drained by the colonial states and their looting companies, as the best percentage that Tunisia owns in the oil and gas fields does not exceed half and in some of them it does not own anything, so do not be guards of colonialism at the expense of your people, so you become cursed by future generations. And Hizb ut Tahrir seeks your support to cut off the colonial ties by establishing an independent state based in its decision solely on the sovereignty of the Sharia and the authority of the Ummah, until we bring about a revival that shines with the light of Islam.

Allah (swt) says: الَّذِينَ إِن مَّكَّنَّاهُمْ فِي الْأَرْضِ أَقَامُوا الصَّلَاةَ وَآتَوُا الزَّكَاةَ وَأَمَرُوا بِالْمَعْرُوفِ وَنَهَوْا عَنِ الْمُنكَرِ وَلِلَّهِ عَاقِبَةُ الْأُمُور “[And they are] those who, if We give them authority in the land, establish prayer and give zakah and enjoin what is right and forbid what is wrong. And to Allah belongs the outcome of [all] matters.” [Al-Hajj: 41].