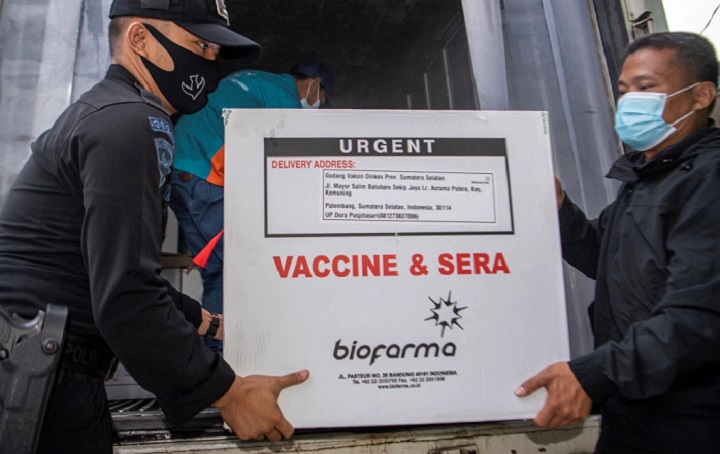 Last June, the Vice President of Indonesia, Ma’ruf Amin stated that the disruption of information technology had negative impacts, such as the emergence of false information (hoax), fraud, slander, provocation,and contents containing heretical and extreme teachings. “As a result, we see many people have become victims, for example, the distrust of some people in the Covid-19 pandemic because they are influenced by provocations of the conspiracy theory,” said Ma’ruf, during the inauguration of the Mathla’ul Anwar and Muslimat Mathla’ul Anwar Executive Board on Friday. As of April 30th, 2021, the Indonesian Ministry of Communication and Information has recorded 1,556 hoaxes related to Covid-19 and 177 hoaxes related to the Covid-19 vaccine (Kompas, June 25th, 2021).

The disinformation about Covid-19 on social media is apparently being fought in Indonesia and throughout the world, including the US White House. In a recent update, US President Joe Biden has publicly criticized Facebook and other digital platforms for allowing disinformation to be proliferated. As reported by Reuters, Biden said disinformation led to an increase in the number of deaths during the pandemic. “They (digital platforms) are killing people. Look, the only pandemic we have is among the unvaccinated. And they’re killing people,” Biden told reporters at the White House when asked about misinformation and what his message was to social media platforms such as Facebook Inc’s last July 17th.

The failure to stop the flow of disinformation about Covid 19 is actually a form of bewilderment of the world system order today in processing information. This is ironic. We are living in the age of information with advances in big data technology and Artificial Intelligence, but on the other side, the information that is harmful to health and humanity can easily circulate.

The flaw of the secular system of capitalism is the absence of a clear instrument in mapping information to distinguish between true and false information, as well as between beneficial and harmful information for any society and any country. However, everything is referred to human logic and technology. This is due to information politics is allowed to run according to market interests, so that social media corporations with big data technology and its algorithms only serve the money-playing machines, not work for humanity. Another factor is the asymmetric world order that lead the information channels to be controlled by the global capitalist elite. Thus, the elites know everything about the people, while the people know nothing about their elites.

As a result, the position of Muslim ummah in the midst of this wave of disinformation is so vulnerable. The Muslim ummah only has the Islamic framework of thinking, but no one can guarantee information security for them. Therefore, the Covid-19 pandemic is not only a life test of disease outbreak, but it is a test of mentality and mindset.

In the book “At-Tafkeer”, Shaykh Taqiyuddin an Nabhani said that there are important conditions for the Ummah in forming a map and framework of thinking: when we must use scientific thinking and when we must use rational thinking, as well as what the correct method is. The key is that the Ummah must be able to think correctly. The correct thinking is thinking about the fact or reality that can be sensed and validated by our brain, and we process it with the knowledge we have or ‘previous information’. Thinking correctly is not fantasy or imagination that still leaves room for speculative assumptions without us being able to verify the truth, so when we think correctly it requires fact check and recheck constantly. In the book, he also explained political thinking, which is indeed the most difficult level of thinking that requires many conditions, in-depth analysis of facts, and various analytical skills. It’s not oversimplistic like the syndrome of conspiracy theory. However, in political thinking, we can measure everything from the real political agenda, not base everything on suspicions and conspiratorial speculations that can’t be proven.

This flow of disinformation is getting more complicated by the loss of public trust in many capitalist regimes that have shown their incompetence from the very beginning. This is alongside the ambiguous, inconsistent, sporadic, and defensive public policies. Therefore, it is not enough to have a fortress in thinking method at the individual level. Bigger fortress is necessary at the level of policymakers. The role of the state in dealing with the Covid-19 outbreak as well as the disinformation tsunami is crucial, in fact, it is the main fortress.

Islam actually has a legacy of the correct policy-making rules with a capacity to respond and process information no matter how complicated it is. When there’s a problem of tasyrî’ (legalization of sharia law), for example, only Allah’s revelation plays a role in this realm. Thus, we must only refer to the Qur’an and Sunnah as well as those indicated by both, namely Ijmak of the Companions and Shar’i Qiyas, with valid ijtihads. This instrument is not found in today’s secular civilization.

Meanwhile, in matters of science, including medical science, Islam guides the policymakers to listen to the opinions of experts, not the majority or other stakeholders. Indeed, in terms of experimental science, relative truth applies, therefore it’s necessary to be a political authority that chooses the is the strongest opinion of an expert to adopted by the state.

As a result, it is the right of society to obtain clear and educative policy communications from the government. For example, in the midst of the commotion of different views of vaccine experts in the public sphere – that lead the people to confusion –, leaders should be able to take a stance, choose the strongest opinion, and educate the people wisely, not defensively blame those who are critical to the government.

But what can we say, in the current condition, that main fortress seems to disappear. We are forced to put the burden on ourselves. The people are then relying on individual resilience and independently seeking opinions from honest, sincere, and competent experts while continuing to hold on to the directions from the righteous ulamas and public figures who are the Mukhlisheen. May Allah (swt) always open the doors of salvation for our Ummah in the midst of this great test of mentality and mindset. This condition reminds us of the words of the Prophet Muhammad (saw):

It is narrated from Abu Hurairah, may Allah be pleased with him, that the Messenger of Allah (saw) said,

“Deceiving years will come when the liar is believed and the honest man disbelieved; when the traitor is  trusted, and the trustworthy man is regarded as a traitor; and in those years the Ruwaibidhah will speak” It was said ‘Who are the Ruwaibidhah?’ The Prophet ﷺ replied: “The trivial man/shallow man who speaks in public affairs.”(Ibn Majah)