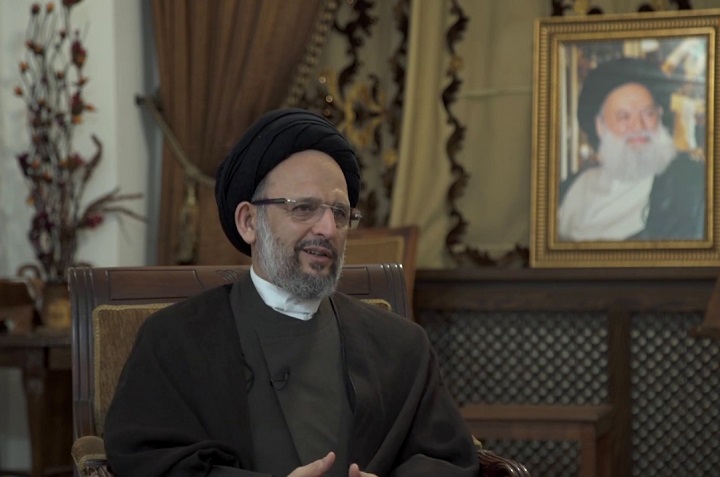 As part of the campaign of Hizb ut Tahrir / Wilayah Lebanon to raise awareness of the danger of the authority following the path of the International Monetary Fund project, and the demarcation of the border with the Jewish entity, a delegation from the party headed by the member of the Central Communications Committee, Engineer Salih Salam, and Brother Engineer Imad Al Mulla, and Brother Imad Muati, representing the Activities Committee in the city of Beirut, visited his Eminence Sayyid Ali Muhammad Hussein Fadlallah, Chairman of the Board of Trustees of the Institutions of his Eminence, Muhammad Hussein Fadlallah. Initially there was an affirmation of the tangible efforts made by his Eminence and the institution that he inherited from his father, may Allah have mercy on him, in reconciling Muslims, focusing on the unity of their ranks, and rejecting sectarianism.

Then the dangers of the road that the authority has taken in following the International Monetary Fund project was discussed. Starting with the fact that it is based on usury, then what will follow of the privatization of the public sector and its ownership by foreigners, and the mortgaging of the country to the dictates of this fund and its successors, and that its previous experiences are evident in the devastating effects it leaves in the countries it enters, in addition to what is happening in Lebanon of economic collapse and outrageous high prices that have affected all aspects of life. This matter is more important to those who have a platform and an audience, to make them aware of the dangers of the direction the authority has taken.

Then the issue of demarcating the borders with the usurper entity of the Jews of the Blessed Land of Palestine was discussed, which is considered an acknowledgment by the authority or those who remain silent about it, for the right of the Jews in the land of Palestine, and ignoring the fact that they are occupiers, especially in a country that describes itself as a resistance to this enemy, and this is forbidden by Allah (swt). Therefore, this mistake or the move by the authority should be warned about. The discussion also took place on the issue of Islamic unity, which is a primary concern of Hizb ut Tahrir and of Sayyid Fadlallah, especially after the picture has become clear that the West, and in particular America, sought and is still seeking to split the ranks of this Ummah, by igniting sectarianism and sectarian strife. The situation in Iraq, Syria and Yemen is the best witness and evidence, in which the matter reached bloodshed, using local tools. The party stated that it has warned of this matter from the beginning, so the calamity does not befall the Muslims.

In the discussion it has been made clear that the practical way to confront the military and economic hegemony of the West, and to prevent the establishment of the Jewish entity in Palestine, and to prevent this sectarianism that has been fueled, is a political entity that governs the Muslims, which is the Khilafah Rashidah (rightly-guided Caliphate) on the method of the Prophethood; which we should not be ashamed of even presenting in a country like Lebanon. It contains several orientations, because Islam and its Khilafah on the method of the Prophethood is an entity that unites Muslims and non-Muslims, in which no one is forced to leave his religion, but people live under it in peace, tranquility and prosperity.

As for fears of Islam as a result of some historical or current behavior, there are no justifications for them, since what we are calling for will not be a hereditary rule or a forced rule, but rather as the Messenger of Allah (saw) has given its glad-tidings:

“…Then there will be Khilafah on the method of Prophethood”.

It is the ruling of the Muslims (Imama) and a general leadership for them in the Deen and worldly affairs, as desired by Allah (swt). It was agreed that the awareness campaign on this matter should be intensified among Muslims and others, so that people, all people, realize that Islam is a system in all matters of political, economic and social life. This is to prevent violations that may occur from anyone who tries to distort the image of Islam. And there was emphasis made on the fact that confronting this practically can only be with the presence of Islam, the Deen that the State emanates from.