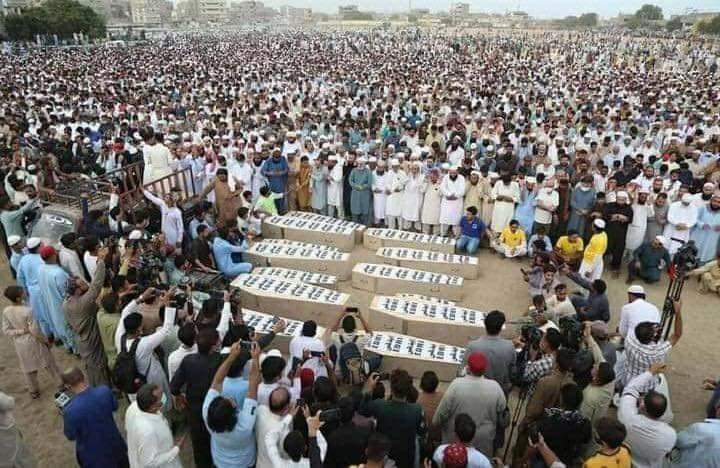 Residents took out a rally in Swat on Tuesday to protest the brutal killing of 14 people that included women and children, belonging to Khwazakhela tehsil in Karachi on Aug 14. The incident took place when unidentified persons attacked a minibus with a grenade. The vehicle was carrying about 20 members of a family, who were out to participate in a wedding ceremony. (Dawn)

Comment:
According to Sindh police total number of reported crimes in Sindh province, from January to June, 21 is 65,829, which is 18,662 more than the previous survey of 2020, and these are only the cases that were reported. Karachi is not only the largest city of Sindh but of whole Pakistan. There was a time when Karachi was called ‘uroos ul balad,’ bride of cities, and ‘roshnion ka shehr,’ or the city of lights, the Capital of Pakistan and the place where most migrants from India landed. It is the biggest magnet of opportunity that attracts people from the farthest corners of Pakistan, making it a patchwork quilt of ethnicities, classes, sects and even nationalities. Over the past few decades, Karachi has witnessed grotesque violence, including targeted killings, political, ethnic and sectarian violence as well as acts of terrorism.

Karachi has had a long history of volatility stemming from sectarian, ethnic and political strife. Political parties fighting for the control of the city for personal gain have caused serious damage to the city. Thousands of people have lost their lives to violence and there is no count of those who have been robbed openly. Multiple famous people, both political and non-political, were killed, for not agreeing on some kind of submission, financial or ideological. Somehow the situation turned into, snatch, grab and revenge to the extent that the police became a part of this and people were picked, tortured and even killed without being proven guilty. Killing of Mir Murtaza Bhutto, brother of then Prime Minister Benazir Bhutto, by the Police Officials is the most prominent example of these extrajudicial killings.

Reason of these rising rates of crime is not ethnicities or sects, but the lawlessness in Sindh, which is a little more than Punjab or KPK, but is comparable to Balochistan. In this recent target killing, most of the people killed were women and children returning from a wedding ceremony and police has no clue about the cause of the crime. This is also reminiscent of the incident that happened more than 14 years ago in Karachi, where 50 people were killed, but the case still remains unsolved. Karachi was not able to stabilize itself, especially after the capital was moved from here to Islamabad. Later Zulfikar Ali Bhutto played the Sindh card that created a rift between migrants and local Sindhis. So a city that was an industrial hub turned into a city of blasts, killings and robberies. As the city was ruled by a different political party than the central Government, so there always was a continuous blame game for the sufferings of Sindhi people.

Life and assets of the people of Sindh and other Muslim areas can only be fixed by the implementation of Islam on the whole. Education will teach youth the difference between right and wrong, a true Islamic Justice System and the implementation of Hudood will bring a quick drop in the crime rate. The ruling system will make sure that no Muslim area that lacks in the source of a need, is deprived of it. Karachites suffer because of water as well, and there is a whole water mafia working with the collaboration of the current authorities. People have to pay for each drop of water. Under the Islamic Social System, the beauty of these multiple ethnicities living together will be enhanced and will be an example of unity and equality. We as Muslims have an example of the treatment of Ansaar with the immigrants of Makkah. The only thing that made Makkah people leave their land was Islam, and only thing that made people of Madinah accept them happily was also Islam. So the required element for unity and prosperity of Muslims is implementation of Islam.

With Islam applied, the State will not turn its people into angels but it will make sure that they stay human. The Messenger of Allah said (saw):

“No ruler is appointed but he has two groups of advisers: A group which urges him to do good and tells him not to do evil, and a group which does its best to corrupt him. Whoever is protected from their evil is indeed protected. And he (the ruler) belongs to the group that has the greater influence over him.” (Sunan an Nasa’i 4201)