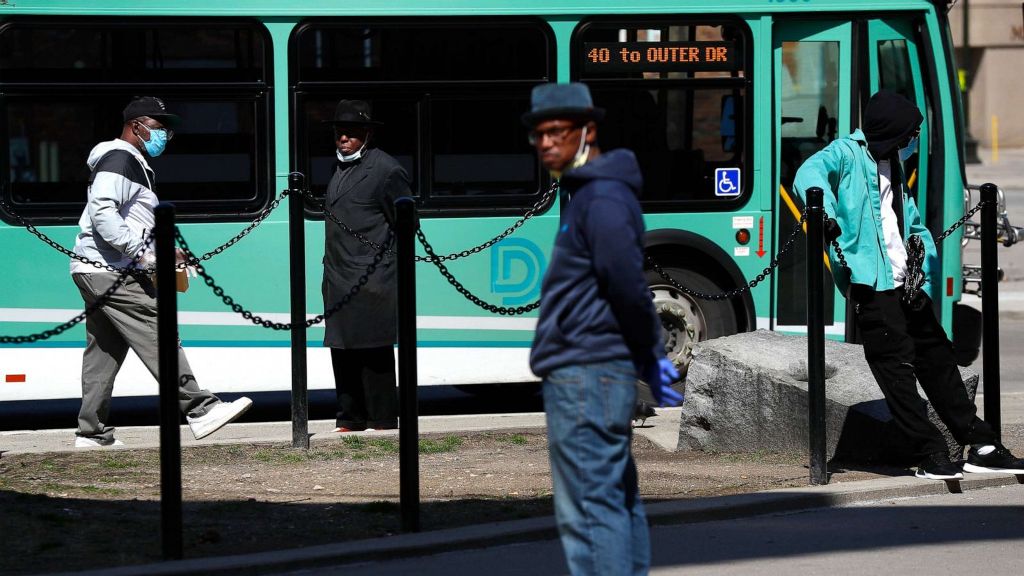 Health officials grappled with its disproportionate impact on black Americans. The disparity is especially stark in cities like New Orleans, Chicago and Detroit, where high concentrations of African Americans live. In Chicago, which is 30% black, black Americans account for 70% of all coronavirus cases in the city and more than half of the state’s deaths. “We know all too well that there are general disparities in health outcomes that play along racial lines and the same may be true for this virus,” said Ngozi Esike, director of the Illinois department of public health. (The Guardian, 8 April 2020)

Dr. Keith Ferdinand, professor of medicine at Tulane University School of Medicine in New Orleans, said numerous variables are making African Americans more vulnerable to COVID-19. They include working in service industries or “essential jobs” that require them to expose themselves to others who may be infected; using public transportation to get to work; lack of access to early testing; and a historical distrust of the health-care system because of previous bias. This leads to “a mixture of the many difficulties faced by African Americans which may compound or even extend the burden for the coronavirus risk factors,” Ferdinand said. (National Geographic, April 24, 2020)

Blacks in about every state with racial data available have higher contraction rates and higher death rates of COVID-19. (Brookings Institute, April 9, 200)

COVID-19 has exposed another discrepancy that was long etched in US history, the deep racial divide that existed and still exists in American society, the black population at a deep disadvantage in comparison to the white population. Arguments being made with various data as backup that African Americans are usually the essential workers from warehouse workers to being clumped into the underprivileged neighborhoods usually are cramped housing facilities with no or limited access to health and social benefits. The resounding sentiment throughout the various US states, “it is raving my [black] community.” Thus the persons of color are immensely exposed to the risks of the coronavirus and are unable to be afforded the “privilege” of social distancing and self-quarantine as those who are able to secure a better work benefit package (predominantly white demographic). “The data released so far shows 68% of the coronavirus deaths in the city [Chicago] have been of African Americans, when they make up around 30% of the population.” (BBC) “Louisiana has the highest rate of deaths from COVID-19 in the nation and, according to Gov. John Bel Edwards, more than 70 percent of the people who have died so far were black. Black people make up just 32 percent of the state’s population,” (WWNO.org)

Numerous public health announcements implore the US population to implement the CDC and WHO health precautions yet without the adequate economic safety net to fulfil the needs of the population, we already hearing cases of insufficient funds from Trump’s stimulus package and it already being wiped out by big corporations leaving small businesses to fend for themselves. Also the various aid is to US citizens who are able to properly access these funds, again bringing the issue of class discrepancy to the table. Homeless persons with no permanent address or bank accounts again fall into the gaping hole of the forgotten unless the kindness of regular people who offer food or clothing help out to their limited means but are unable to provide them with hospital care or medicine due to the fraying health care system in the US.

Many public health experts, politicians and economic experts are busy discussing this topic not only from the onset of the COVID-19 crisis but since decades as the US has seen many crisis from natural disasters to economic recessions but the underlying problem continues to exist and expand. When the dilemma is still based and dealt with on a racial level, the problem will always continue to exist and not only expand but worsen. This is seen in American society. Then the approach to this dilemma needs to be examined before the problem can be even deliberated at the table. American society is notorious for its deep racial prejudices inherited from the menacing slavery period that (racism) has been openly flouted or incited by various politicians to gain the popular vote but that is another topic.

The public healthcare system is deeply flawed without guaranteeing immediate good quality medical attention and medicine to all those in need regardless of color or class. Now here the US is capable of afforded healthcare but does not provide the necessary funding to this sector due to refraining from a so-called socialist model of government again another flaw in Capitalism, so it has people dying and suffering at an explosive rate as the statistics clearly prove (again many argue that the statistics are slanted due to the various factors or lack of factors) but still the numbers show the highest vulnerable demographic is the black population in the US.

Instead of hospitals urgently opening their doors and rooms to those in need of attention, they are asked to show their medical insurance cards again minimum wage workers will not be able to pay the deductible or be able to afford hospital stays due to the skyrocket price tag so they remain in their homes or forced to work where the contagion spreads to the same demographic or other people.

COVID-19 has not only exposed human weakness to succumb to this virus but it has unraveled the garment that the US boastfully wore in front of the world to reveal the gaping holes: in government and their failure to properly address this virus which led to a pandemic: in the healthcare sector being unable to properly address the virus from a public health aspect and then causing selective medical attention to those who are able to afford this so-called privilege which led to the major risk of spread in the underprivileged class majority being the black population: and the economic failure to help those who are struggling to make ends meet and support those who are affected by the virus, mainly providing relief for the main breadwinners and their dependents.

So instead of attempting to tackle the problems to this crisis, how about tackle the main approach to this ongoing crisis to prevent more colossal failure. Capitalism has been tattered throughout the decades, it is time remove its garb and burn it …. Islam, with its fixed rulings from the Creator, has been time-proven of how it met the needs of its population in a first-class model and only first-class without ethnic or racial divide providing healthcare to the highest most dignified manner to all its population, Muslim or not, economic issues are handled with the intention to support people as a people and not follow the money trail like in today’s current ideology. Once this becomes the core of the system, then progress can be sensed and experienced by the population. In the meantime, the black population will continue to suffer from the prejudice of exclusivity in the US with many paying dearly with their lives as the price of Capitalism holds no bearing for human life.