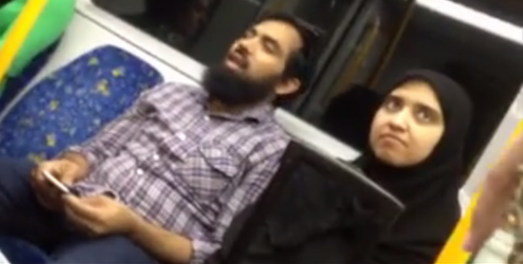 A young woman has been hailed as a legend for standing up to defend a Muslim woman who was harassed on a Sydney train, reveals The Sydney Morning Herald (17/4/15). Ms Eden uploaded a personal video to her Facebook page that captured the confronting incident on Wednesday 16/4/15 which subsequently went viral. She said she wasn’t sure what response she’d get from others on the train carriage but she felt compelled to say something. Mariam Veiszadeh, founder of Islamophobia Register Australia, said she was “heartened” by Ms Eden’s actions but said it was still rare for bystanders to intervene in such incidents. She said the number of incidents reported to the register had increased following the Reclaim Australia rallies around Australia this month. “We’re not in the midst of an imaginary backlash, Islamophobia is very much real and you can see from the video it has devastating consequences for Muslim women,” she said.

Biased-motivated attacks against Muslim women living in secular liberal societies like Australia are now commonplace. The rare occasion of an Australian woman speaking out against a female passenger’s tirade of insults towards a Muslim woman with her family and the international hero status lauding her brave conduct on social media reflects this point. This sustained attack towards Muslim women in society is primarily due to politicians and the media peddling anti-Islamic and xenophobic views in order to garner electoral support. Politicians like Prime Minister Abbott, Jackie Lambie, Pauline Hanson and the Reclaim Australia movement all continue to exacerbate negative public opinion by targeting Islam and Muslims under the pretext of fighting violence and protecting the Australian Anglo-Saxon secular liberal way of life. Surveys continue to document this ongoing xenophobic discriminatory attitude. In 2013, a survey conducted by the Scanlon Foundation, found that 19 percent of Australians struggle with some form of racial or religious discrimination. In 2011, another survey conducted by a group of Australian universities found that half of the population in Australia have anti-Muslim views.

The anti-Muslim prejudice that Muslim women are subjected to is nothing more than a manifestation of this clash of civilisations between Islam and Western Capitalism. It began with the Crusades, which led to the colonisation of Muslim lands, to the destruction of the great Khilafah and the establishment of despotic rulers chosen by those who consider Muslims as the enemy, to suppress the Deen. Today it is expressed through the West’s so called “war on terror” and “war against extremism”. In response to this sustained onslaught against Islam and Muslims, our Muslim sons and daughters must enlighten themselves with the Islamic culture and broaden their knowledge about Islam that will instil pride in their Muslim identity and their Deen. Let the non-Muslims learn from Muslims how women are honoured and respected in Islam in contrast to how women are treated in Western society as sex objects, abandoned single mothers and battered wives. In Australia today, women and their children are facing an epidemic of domestic violence and abuse with 30 women killed by their partners during the first 4 months of 2015.

“You will surely be tested in your possessions and in yourselves. And you will surely hear from those who were given the Scripture before you and from those who associate others with Allah much abuse. But if you are patient and fear Allah – indeed, that is of the matters [worthy] of determination.”