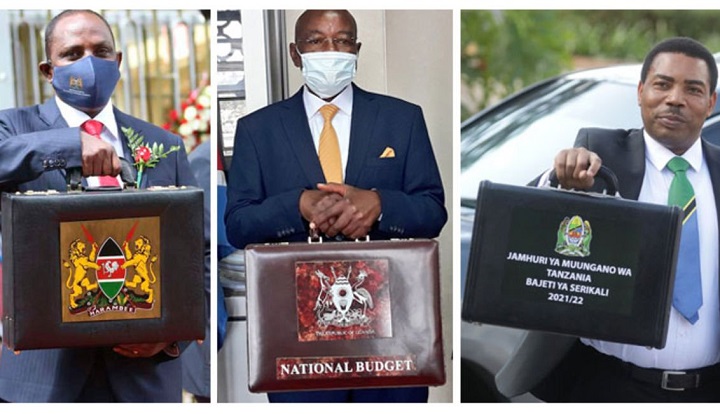 On June 6, 2021 East African Finance ministers tabled their national budgets in their parliaments for the fiscal year 2021/22.

In Tanzania’s context, the government plans to collect and spend a total of Tsh36.32 trillion ($15.59 billion), as its budget was tabled by the new Minister of Finance and Planning, Dr Mwigulu Nchemba.

The budget cunningly came with what can be seen as comfort and good news to workers and civil servants by announcing a reduction of income tax (Pay-as You-Earn) from the existing 9 to 8 percent. Yet, the issue of annual salary increments which would benefit even those workers who were not promoted has not been touched for nearly six years now. While a member of Parliament in Tanzania is paid Tsh 3.8 million salary and Tsh 8 million monthly allowance which makes a total of Tsh 11.8 million (roughly US $5,130), Tsh 240,000 sitting allowance and Tsh 120,000 per day, Tsh 240 million after five years of service plus first-class health insurance for his family and other benefits, other civil servants and workers are suffering by getting ‘hand to mouth’ salaries having no increments for years.

Regarding a national debt, the budget stated clearly that it has increased to Sh 60.9 trillion in April this year, from Sh 55.5 trillion recorded in the same period in 2020. Also, external debt was Sh 43.57 trillion while the domestic one is Sh 17.3trillion.

According to Finance Minister, the increase of the debt is attributed by new borrowing for mega development projects such as: standard gauge railways (SGR), Julius Nyerere Hydro-power project, the East African Crude oil pipeline from Uganda to Tanzania and the planned $30 billion Liquefied Natural Gas plant in Lindi, Southern of Tanzania. The government has allocated Sh 13.3 trillion equivalent to 37 percent of its budget to finance them.

It is more than surprise that the government under the late President Magufuli was many times boasted publicly that mega development projects funds are internal revenues, and were not borrowed anywhere.

Through this budget the government proposes the amendment of The Electronic and Postal Communication Act (Cap 306) with the aim of imposing a levy of between Sh10 and Sh 10,000 on each mobile money transaction of sending and withdrawing money, a medium of sending and withdrawing money through mobile phones that is used by millions especially ordinary people. Furthermore, it has proposed on imposition of a levy of between Sh10 and Sh 200 per day per Subscriber Identification Module (Sim Card) depending of the ability of the user to recharge the balance.

This is the nature of the so called annual budget in democratic government in Tanzania and elsewhere, it is of full of injustices, milking of public, extra burden to poor by openly increasing national debt, raising taxes, levies, fees on public utilities such as petrol and vital commodities and services on the pretext of the betterment of social services and infrastructure.

The governments in a democratic system are mainly meant to collect taxes instead of helping and looking after affairs of their people justly. Despite the fact that most of developing countries including Tanzania are endowed with many natural resources like mines, forests, major rivers, massive lands that can sustain public lives, but since these resources are exploited by Western capitalist nations through dominance and privatization, the burden even of basic services are carried by the public who are mostly poor.

In Islam under the Khilafah state (Caliphate) there is no issue of budget session for law enactment as in democratic Parliaments which itself squander a lot of public money. Because the Treasury’s revenues in Islam are levied and spent according to Shariah rules which are fixed. As for appropriation of the budget and the amounts included in each appropriation, this is according to the Ijtihad of the Khalifah as his duty in looking after affairs of his people. (The Economic System in Islam, Taqiuddin an-Nabahani). As in the issue of social service provision to the public, construction of infrastructures is a state responsibility, when there is a shortfall, the state would borrow or imposes affordable tax only to the richest in contrary to capitalist injustices and milking of the weak and poor.