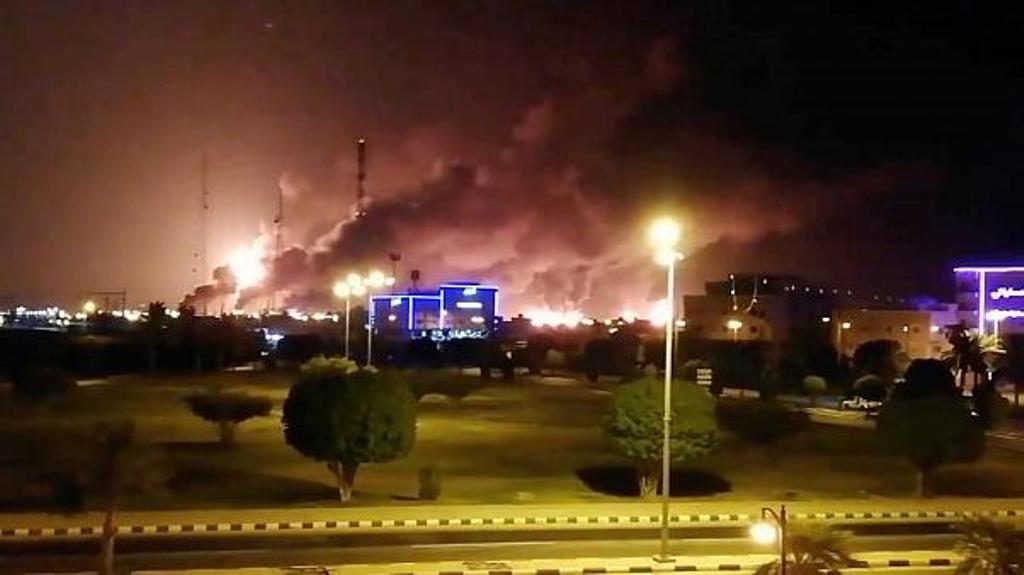 The past week the Saudi Arabian Oil Company, the Aramco oil facilities in Abqaiq and Khurais were struck by drone attacks. This caused the oil production of Saudi Arabia to be reduced to half of its output. This caused raging fires and significant damage that halved the crude output of the world’s top oil exporter, by shutting down 5.7 million barrels per day of production.

The questions that arises is why Saudi Arabia was not able to protect its precious dairy cow with its billion-dollar defence system? And what are the consequences? And who is benefiting from this?

Saudi Arabia has after the US and China, the world’s biggest military expenditure. It has by far the best-funded and well-equipped defence forces in the Middle East. 28% of its budget, or about $67,5 billion goes to its military.

In regards to its air-defence, it deployed the American Patriot system (a surface-to-air missile (SAM) system) against the Soviet Union (later Russian) made scud’s (a tactical ballistic missile) during the Persian Gulf War of 1991 against Iraq. Since then, this system is up and running, and is utilised to ward off the few missiles directed from Yemen. Besides this, it has the German-made Skyguard air defence system, the French-made Shahine mobile anti-aircraft system, and has recently purchased Lockheed Martin’s highly advanced THAAD (terminal high-altitude area defence) interceptors. It has also got advanced radar systems which are integrated in the “Peace Shield” system which is a state-of-the-art C3I system specially developed for the Royal Saudi Air Force (RSAF). This system is a nationwide ground to air defence, and command, control and communications system which integrates between the Royal Saudi Land Forces (RSLF), the Royal Saudi Naval Forces (RSNF) and Royal Saudi Air Defense Force [RSADF]. So, is it possible to downplay the attack on Aramco, by stating -like some American officials did – that this highly advanced air defence system is unable to cope with drones and some missiles?

And especially, if you take into consideration that Saudi Arabia has five major air defence sub-commands of which the 5th Group is located at Dhahran at the hearth of the Saudi oil centre, Aramco, and that the bulk of all the Saudi patriot forces are deployed here to protect the oil infrastructures in the Eastern Province; Is it plausible that this well-protected place can easily be knocked out by a couple of drones?

Also, incompetence, or inattentive behaviour of the military personal who are controlling and monitoring the batteries and radars is far-fetched due to the multiple layers of security. And especially if the shortest distance between Yemen’s border and Dhahran is approximately 850 km. So, to assume that these drones and missiles cross this entire distance utterly unnoticed is hard to believe.

Also, places much closer to the Yemeni border like the Najran province, Khamis Mushait, provinces of Jizan and Aseer have been targeted by the Houthis. Almost all of the missiles have been intercepted. And especially due to the extra security between Saudi Arabia and the Yemeni border.

A missile strike from Iran, as pointed out by president Trump and U.S. Secretary of State Mike Pompeo, calling it “an act of war” is premature and not plausible due to the fact that Iran would not jeopardize its already weak position. And also, that the attacked facilities are in the eastern side of the country bordering, Bahrain, Qatar, UAE, Kuwait, The Persian Gulf, and none of them notified about any possible missile attack coming from Iran. Even the largest US 5th navy fleet which is active in the region did not send any warning signals of missiles directed from Iran.

What’s interesting is the timing of the missile strikes; it occurred a week before an Aramco pre-IPO meeting was to take place with analysts and banks (local and international) at Aramco’s headquarters in Dhahran. The attack did not only damage the oil facilities and caused halving of the crude oil output which can take weeks or even month to stabilize. It also negatively affected the confidence in ARAMCO to secure oil facilities which will likely lead to a devaluation of ARAMCO’s IPO, which is in benefit for American investors and banks who are listed to play a big role in the IPO like, JPMorgan, Goldman Sachs, Morgan Stanley and HSBC.

According to some analysts, a devaluation of the IPO will cause the oil prices to rise even more. This is also in the benefit of the US’s global energy competition. The high oil prices will compensate the US’s relatively expensive Oil shale extraction and export. This includes likewise the rise of oil prices after the attack on ARAMCO. But also, the designating of Iran as the guilty party by continuing a stop to Iran’s oil export is in line with the broader US strategy in the region. No Iranian oil export will push up the oil prices globally.

Also, the Houthi leadership is calling for a ceasefire and a political solution and showed willingness to cooperate with the Yemeni government, after it claimed the attack.

So even though, at this stage, it is not possible to point out to the real perpetrator with certainty, it is clear that the only one who is benefiting from this situation is the US.