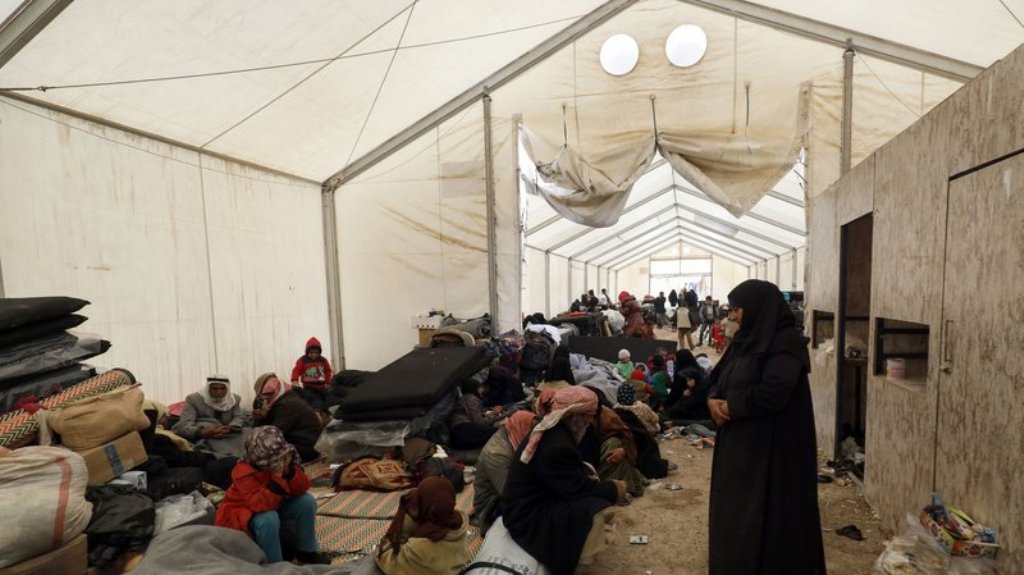 After the smash of ISIS in Iraq and Syria, the wives and children of the organisation’s members, who have either been killed or imprisoned, are struggling to survive in the camps established in the midst of the desert. A report issued by the International Rescue Committee has revealed that 4,000 women from more than 50 countries and their at least 7,000 children under the age of 12 are being held under deadly conditions. Their crime is being the wives and children of ISIS members. (Agencies)

Between December and September 1st, 339 deaths of children were recorded – over 80% of the total deaths in Al-Hol camp to date. The main causes being recorded are severe malnutrition with complications, diarrhoea with dehydration and pneumonia – a proxy indicator of poor health conditions upon arrival and poor access to humanitarian assistance. The report found overflowing latrines, sewage trickling into tattered tents, and residents drinking wash water from tanks containing worms. Young children with skin rashes, emaciated limbs, and swollen bellies sifted through mounds of stinking garbage under a scorching sun or lay limp on tent floors, their bodies dusted with dirt and flies. Children are dying from acute diarrhea and flu-like infections, aid groups and camp managers said. Pregnant women give birth in tents without the assistance of doctors and nurses.

It was the kafir West itself that pushed innocent young girls and women, who desired to live a life befitting a Muslim woman, and the unaware young men into a monstrous web of lies, titled ISIS. Reaching the turning point in its political road map, it decided to do away this self-made puppet organisation, and to clear Syria and the region off of ISIS. Then it deprived the remaining thousands of innocent and defenceless women and children it pegged as ISIS members of all their human rights, and even human identity, and finally disposed them in camps like El-Hol, like hazardous waste.

And now, the European states, with Germany, France and Britain in the forefront, seek ways to revoke the citizenship of these women and children in order to refuse them their rescue. According to them, the returning of these people constitutes a threat, and the infrastructure, which they claim to be necessary, is too costly. Yet they do not refrain from utilizing them as a means for gaining votes in their political elections. And the president of the USA, the impertinent self-declared guardian of mankind, Donald Trump, threatens to dump thousands of ISIS prisoners back to the European countries they hailed from, with the aim of getting rid of the costs they cause, and also in order to bring Europe to its knees.

And what do the regimes in the Muslim lands do in this regard? They do not utter a single word! No matter what these women are, they are our Muslim sisters, and they were trapped in the ISIS trap with the promise of an Islamic life. Knowing this fact, the kafir West is not able and not willing to set up a clear definition of a crime or a criminal. It is an obvious stupidity to expect justice from the kafir West. Such an inability, however, is unacceptable for Muslims, for Allah (swt) Himself has defined, what is crime and criminal: لَا يَنْهَاكُمُ اللَّهُ عَنِ الَّذِينَ لَمْ يُقَاتِلُوكُمْ فِي الدِّينِ وَلَمْ يُخْرِجُوكُم مِّن دِيَارِكُمْ أَن تَبَرُّوهُمْ وَتُقْسِطُوا إِلَيْهِمْ إِنَّ اللَّهَ يُحِبُّ الْمُقْسِطِينَ * إِنَّمَا يَنْهَاكُمُ اللَّهُ عَنِ الَّذِينَ قَاتَلُوكُمْ فِي الدِّينِ وَأَخْرَجُوكُم مِّن دِيَارِكُمْ وَظَاهَرُوا عَلَى إِخْرَاجِكُمْ أَن تَوَلَّوْهُمْ وَمَن يَتَوَلَّهُمْ فَأُوْلَئِكَ هُمُ الظَّالِمُونَ “Allah does not forbid you from those who do not fight you because of religion and do not expel you from your homes – from being righteous toward them and acting justly toward them. Indeed, Allah loves those who act justly. Allah only forbids you from those who fight you because of religion and expel you from your homes and aid in your expulsion – [forbids] that you make allies of them. And whoever makes allies of them, then it is those who are the wrongdoers.” [Al-Mumtahanah: 8-9]

Yet none of the present regimes upon the Muslims have the slightest interest in obeying Allah. It is only the Khilafah Rashidah (righteous Caliphate) upon the Method of the Prophethood that will not abandon any single defenceless, vulnerable woman or child, Muslim or non-Muslim human, to live under inhumane conditions.