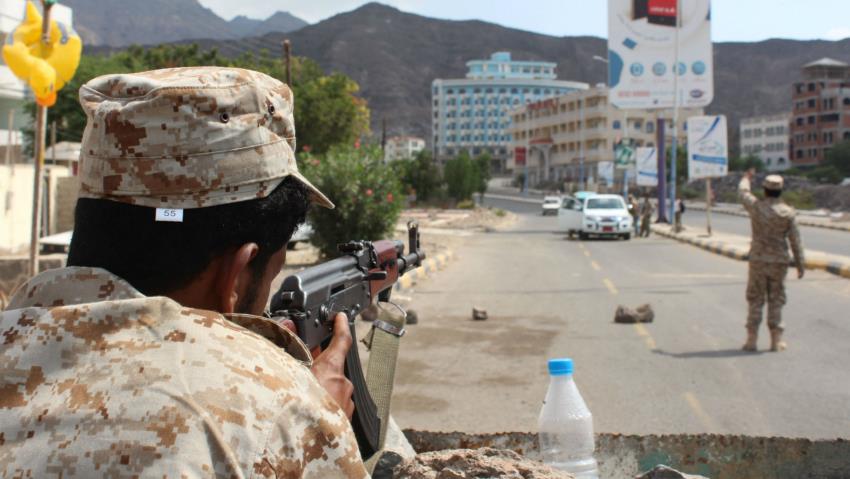 The chaos in Aden continues, with a remarkable expansion in the area of ​​assassinations witnessed in the city of Aden recently, in the presence of President Hadi, head of the so-called “legitimacy” and his government.

President Abd Rabbo Mansour Hadi after expressing his concern in a frank statement days ago, about what he described as security incidents and assassinations taking place in the city of Aden. The response was the assassination of his intelligence officer at Aden Airport, Colonel Nasser Makireh al-Jaadani [Makrij], by unknown gunmen in front of a mosque in the neighborhood Khor Mukasar in the center of Aden and then they fled. President Hadi had called earlier during a meeting held by security and military leaders, including leaders of the Arab coalition forces, with both the Saudi and UAE sides, to put an end to all cases of insecurity in the city of Aden, which dominated by weeks of assassinations that engulfed Clerics and security officials, and dominated the scene for more than a month. While Hadi set up a joint operations room linked to the various directorates and areas of his temporary capital Aden and neighboring provinces.

To end the division and be under the supervision of the Minister of Interior and the leadership of the Arab coalition forces in Aden, in coordination with the various security services in the provinces adjacent to Aden. And these events take place in the atmosphere charged with threats launched by the Transitional Council of separatism, which calls for the change of the legitimate government and the expulsion of the northern forces. Eidros Az-Zubaidi, the head of the Southern Transitional Council said to IRAM News three weeks ago: “The UAE came to restore legitimacy, but the definition of legitimacy is different for the Muslim Brotherhood and many parties within the same legitimacy. These parties believe that legitimacy means that the UAE must support the southerners to liberate the land then hand it over to the Islah group and others, and this is what did not happen and will never happen. Today we are on the ground, we are the people of the right and have the upper hand, and we have the full capabilities and powers to defend ourselves and our people and our cause”. In an interview with Sputnik days ago on 19/7/2018, Eidros [Aidarous] Az-Zubaidi said: “In the south, we are not talking about conflicting forces. We are talking about conflicting projects. There are two political projects in the south, the first is the project of the independence of the south and its sovereignty as a state, Which is led by the Southern Transitional Council, and the other project is the re-imposition of unity under the Yemeni federal formula, which is a project of many parties and its roots are in Sana’a and has some branches in the south, which is the one trying to disrupt the situation in the south through the parties in the Yemeni legitimacy of southerners and others, they meet and agree on their project and agree in their project with the final outcome with the Houthi, who claim to fight them while they are fighting only the South and the project to restore sovereignty and independence”.

These assassinations are the responsibility of the legitimate government and the Southern Transitional Council, since they manage security in the city of Aden and share it with forces loyal to each of them in the presence of Saudi and Emirati forces, each of which supports one of these parties, which does not care about the security of the people or their lives nor provide care for them. These crimes and assassinations will not stand in the light of the wars and conflicts in which Yemen lives from Sanaa to Aden, and the people of Yemen will not enjoy security and safety, so the traveler from Sanaa to Hadramout will fear only Allah or the wolf for his sheep, only under the rule of Islam and Khilafah (Caliphate) state on the method of Prophethood. We call the people of Yemen to rush to establish it and not to rely on the colonial West and its conflicting tools and the malicious United Nations and poisonous solutions.