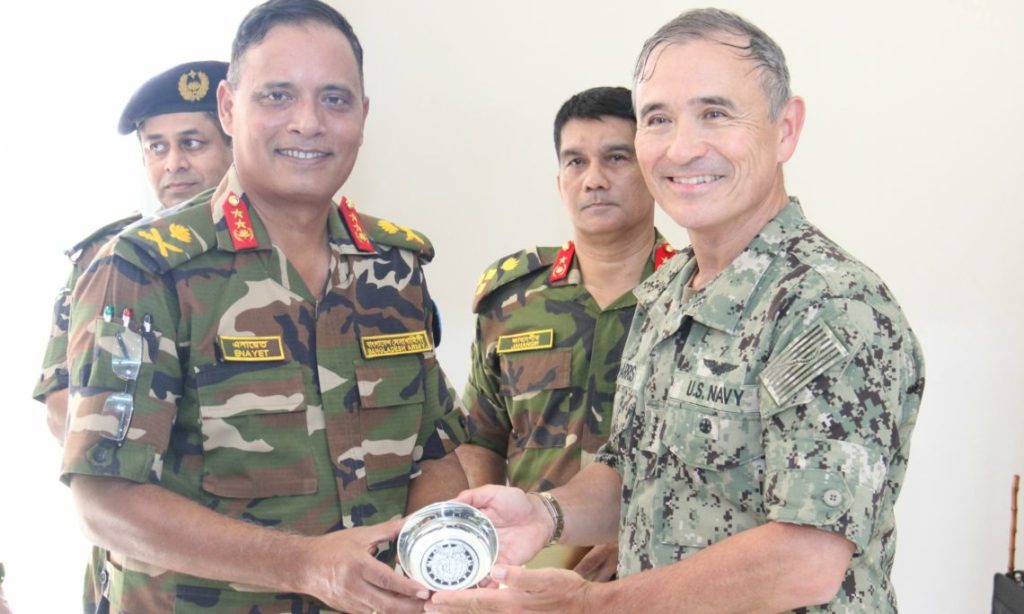 O Muslims, Reject Agent Hasina who is entrusted to Execute this Evil Plot

The United States is eager for two long-term “defense co-operation treaties” with Bangladesh namely Acquisition and Cross-Servicing Agreement (ACSA) and General Security of Military Information Agreements (GSOMIA) in order to further consolidated her foothold in South and South East Asia. The issue of a defence deal has been in discussion for long at a number of Bangladesh–US partnership dialogues. Hasina government recently made a statement that they are considering both the treaties and taking time to reach the right deal. It is clear that being a puppet ruler Hasina has already submitted to the will of America, and now on the process of justifying it through some prearranged debate and discussion. Since her accession to power in 2008 with the blessing of the USA-Britain-India, Hasina is devotedly serving the interests of her imperialist Kafir-Mushrik masters. Due to the geopolitical reality of today’s world, America is in dire need to have complete authority over the land and defense apparatus of Bangladesh in order to accomplish its policy of ‘containing China’ and to resist the emergence of the second Khilafah Rashidah (rightly guided Caliphate) from this region. Undoubtedly, America has assigned Hasina the duty to materialize the defense co-operation deal and she is making way for it gradually.

O Muslims! Do not accept this evil defense co-operation deal or any other treaty with butcher America whose hands are stained with the blood of your brothers and sisters in Iraq, Syria, and Afghanistan. You are well aware that America has waged war against Islam and has been indiscriminately killing Muslims around the world and plundering their wealth for decades. How can we even consider having a defense co-operation treaty with our archenemy? Think about the benefit these treaties can bring for the people of Bangladesh – nothing but humiliation and vulnerability. The USA has drafted the treaties in a way that it will have complete dominance over our sovereignty and security. Having no vision for the nation, our secular democratic rulers have been pursuing slavish foreign policies for decades and have been handing over our sovereignty to the Western Kuffar imperialists and to their regional ally Mushrik India. You must reject this secular democratic ruling system which breeds such treacherous rulers who are eager to surrender our interests to the imperialists for securing their thrones.

O Sincere Officers in Army! You do not need a co-operation deal with the Kuffar state that is a self-declared enemy of Allah (swt). These treaties will definitely bring great harm for our people, as these are designed to cater to only America’s needs and desires. Remember! Allah (swt) has commanded us not to cooperate in sin and transgression. So, reject this treacherous Hasina government and give nusrah (material support) to Hizb ut Tahrir to reestablish the Khilafah Rashidah on the way of Prophethood which is an Islamic obligation upon you. The Khilafah State will build a strong military and establish its ideological dominance over the world, which will then truly liberate the people from the oppression and injustice of the Western imperialists. The dominance of Western and other Kuffar nations over Bangladesh will permanently end, and the dignity of the Ummah will be restored, insh’Allah.