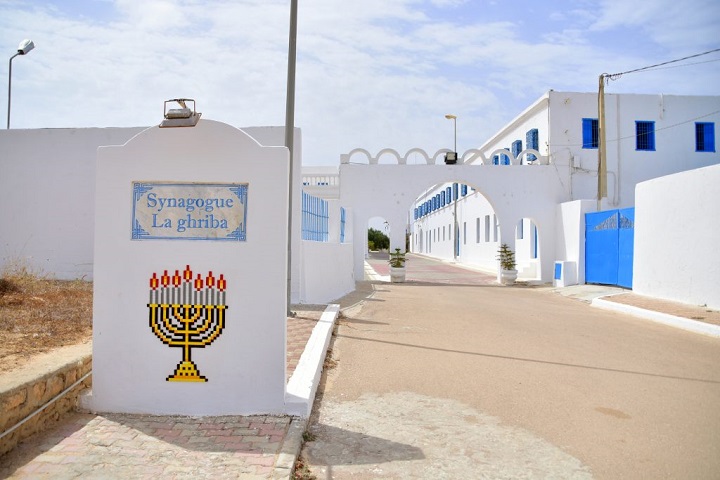 Under the government’s hearing and sight, hundreds of Jews who hold the nationality of the Jewish entity entered the pure land of Tunisia under the pretext of performing the pilgrimage to the El Ghriba Synagogue in Djerba, which concluded on Wednesday 05/18/2022, and the Prime Minister greeted them with honour and welcome! alongside the Minister of Tourism and the Minister of Religious Affairs. Many political professionals rushing to normalize, did not miss the appointment for they wanted their Western masters to see them as loyal and obedient servants. The government provided them with strict security and military protection, as the island and its surroundings turned into a military barracks, with its officers and soldiers guarding the Zionists. For the gathering to meet in a Jewish pilgrimage with a Zionist flavour, at a time when the Jews slaughter our brothers in Palestine every day, besiege the Al-Aqsa Masjid, and abuse the worshipers there, especially the elderly and women.

It is important for us in Hizb ut Tahrir / Wilayah of Tunisia to remind our people in Tunisia of the following:

1. The government and its president have given our land to a terrorist enemy under the pretext of pilgrimage. In a shameless defiance of the sons of the nation in Tunisia and their feelings, and it is well known that the Jews who hold the nationality of the usurping Jewish entity are soldiers in its criminal army. Nevertheless, the government does not hesitate to harness Tunisia’s soldiers and officers as guards to guard those who kill their brothers! Is this not just normalization?! Isn’t normalization a high treason?!

2. Cohen, one of Netanyahu’s advisors, the former prime minister of the Jewish entity, publishes a post thanking (mocks and ridiculing) President Said for having secured the pilgrimage to Zionist Jews this year. Isn’t that an insult to all Muslims in Tunisia?! Isn’t that an insult to our officers and soldiers who were subjugated by their government and their supreme commander of the armed forces to protect the fiercest and the most venomous enemies of Muslims and the murderers of Muslims, especially women and the elderly?!

3. The current rulers of Tunisia claim, with their mouths and lies, the rejection of normalization, and the presence of the Tunisian Minister of Defense alongside the Minister of Defense of a Jewish entity is not far away in a NATO meeting a few weeks, this is in addition to the continuous coordination since the era of Ben Ali with the Jewish entity in many fields such as tourism, trade and agriculture (the tip of the iceberg)!

4. This government, like its predecessors, derives its reasons for its existence from the blessing of European and American parties, who did not lag behind the trail of Jewish and Zionist pilgrims. The pioneers of the colonizers attended political and diplomatic figures from the European Union, Belgium, Canada, Germany and Switzerland, and the ambassadors of France, Germany and America in Tunisia, who attended to bless the activities of the Jewish pilgrimage in Djerba, and to be assured that normalization is underway.

O Muslims in Tunisia, a country of obstacle and a front for the Mujahideen:

It has become clear to you that there is no difference between what comes after July 25 and what comes before, that all are simply puppets moved by the colonizer, and that all of them are only good at implementing the instructions of their masters abroad, but Tunisia, its people and its interest are the last things they think or strive for. How long will you keep silent about this shame?! How long will the silence last and the likes of the rulers tamper with our religion, our country and our destinies?!

As for you, O people of strength and power, officers and soldiers in the security and army: We detest your contentment with these disgraceful acts of your rulers in their loyalty to the colonialists, and we reject the garment of humiliation as Allah, His Messenger (saw) and the believers refuse. The government allowed you to be humiliated on the day it forced you as a guard to protect your enemy, the usurper of Jerusalem, the place of Israa of your honorable Prophet (saw) and the murderer of your Muslim brothers and sisters.

Officers, soldiers in the security and army: Do you accept this?! Would you be satisfied to be servants of your enemies and murderers of your brothers and sisters?! Is there a man among you (and we only know you as men) who accepts what is said: Jews kill Muslims in Palestine and desecrate Al-Aqsa Mosque, and Tunisia’s army and police protect them and facilitate their “pilgrimage” every year?!