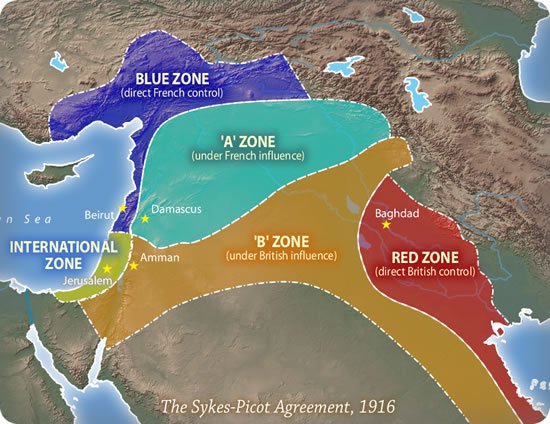 A ‘perfect storm’ is a term used to describe an event where a rare combination of circumstances result in an event of unusual magnitude. March 2016 may very well turn out to be a date many will look back to in the future as the starting point of something great.

March 2016 is the 100-year anniversary of the Sykes-Picot Agreement between Britain and France. Both countries had secretly agreed in clandestine meetings from November 1915 to May 1916 to carve up the Muslim world for themselves, despite it being under Uthmani leadership. In the middle of WW1, France and Britain were bargaining which pieces of the Middle East they would take as spoils of war.

On 3rd March 1924, Britain after years of interfering in the Muslim lands and after splitting the Hijaz from the Khilafah worked to dismantle the Uthmani Khilafah state, which eventually was abolished 92 years ago.

In March 2011, some youth were arrested in Dera’a in southern Syria for plastering graffiti on a city wall. They wrote the Syrian people want a change in the system. Bashar al-Assad worried about the effect this could have and had them arrested and tortured. This led to a number of demonstrations, al-Assad worried the Arab Spring could be beginning in Syria ordered his military onto the streets – the Arab Spring had officially started in Syria. Today, exactly 5 years later, the regime in Damascus has lost most of the country and is bleeding to death. The people of Syria continue their fight despite facing barrel bombs, sieges, chemical weapons, air attacks and now Russia’s military machine.

All of these events are intricately connected. Sykes-Picot 100 years ago was meant to divide the Ummah and the Ummah was meant to become Jordanian, Syrian, Iraqi and Lebanese. The destruction of the Khilafah in 1924 was meant to end the authority that had maintained the unity between the Ummah. The uprising in Syria is challenging both the artificial borders and has seen the call for Khilafah grow.

Despite the West dividing the Muslim lands, putting monarchies and dictators into power and maintaining control, the Ummah never gave up the Deen and the Khilafah. Walid Al-Moallem, the al-Assad regime’s for­eign min­is­ter out­lined in 2013 what was at stake in the coun­try and the region, he said, “We know that those who plan evil for Syria and those who demand the estab­lish­ment of the Islamic Khi­lafah state will not stop at the bor­ders of Syria. So what we are cur­rently doing is even defend­ing Jor­dan, Lebanon and Turkey.”

Today the artificial nationalities and nations created for the people in the Middle East have failed to placate the masses. The autocrats in the Middle East are no longer invincible and able to do whatever they believe would maintain their grip, the Muslim rulers are now experiencing the reality that unless they execute what the people wish to live by, then they are liable for eventual change. The difference between the rulers and the West on one side and the Muslim masses has never been so stark. Survey after survey in the 21st century confirms and points to the fact that the Muslims across the world view Islam playing a central role in their lives and viewpoints about the world around them and see a central role for Islam in their governance.

The direction the Middle East and the wider Muslim world is heading was confirmed by the US. The US National Intelligence Council published a report following its ‘Global 2020’ project, entitled ‘Mapping the Global Future.’ The National Intelligence Council (NIC) is the American Government’s Intelligence Community’s centre for mid-term and long-term strategic thinking. The report set out the likely scenario the world will face in 2020. The report concluded that the appeal of Islam today revolved around its call to return to earlier roots of Islam where the Islamic civilisation was at the forefront of global change under the Khilafah. The report portrayed a fictional scenario ‘of how a global movement fuelled by radical religious identity could emerge.’ The report revealed unequivocally that at the highest levels of US policy planning, preparation is being made for the emergence of the Khilafah. Other reports from US policy makers and think tanks across the world acknowledged there is a broad based ideological movement seeking for the return of the Khilafah.

The global powers in the early 1900’s believed they had put to rest the Ummah and Islam. The Ummah today constitutes over a 1.6 billion people, they possess some of the world’s most strategic resources and they believe in Allah سبحانه وتعالى and His Messenger ﷺ. All of these factors combined are truly a combination of remarkable events.