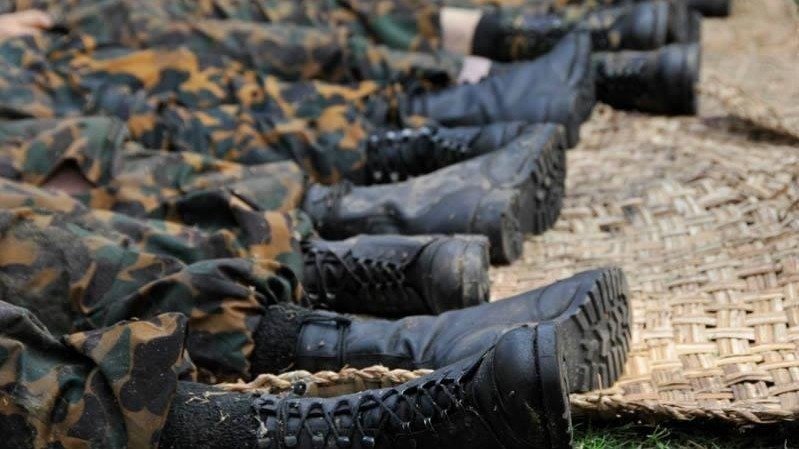 10 years ago on this 25th of February the Pilkhana carnage was made possible through conspiracies and devious ploys and that is still continuing. Hizb ut Tahrir / Wilayah Bangladesh organized demonstrations after Asr prayer across various important places of Dhaka against the continuous ploys of tyrant Hasina to make our Military and Border Guards controversial. With banners titled “From the Pilkhana Carnage to Conflict between BGB-Villagers: Resist Hasina Regime’s continuous Ploys for making the Defense Forces Controversial and for putting them up against the People”, the demonstrations were held in important location in Dhaka including Wari, Khilgaon, Shahbag, Dhanmondi, Mirpur, and Uttara. The participants raised the Shahadah flags, and festoons with various texts and chanted slogans like: Army and BGB: Resist putting into Controversy; Army and BGB: Resist putting them against the People; The Hasina Main Ploy is against our Army; Only Way out – Khilafah! Khilafah; Only way to protect our Army – Khilafah! Khilafah; Only way to protect our Border Guards – Khilafah! Khilafah; Only way to bring Hasina under Punishment – Khilafah! Khilafah!

10 years ago on this day, tyrant Hasina collaborated with India in the brutal killing of our brilliant army officers at Pilkhana – we all remember the brutality of 25-27th February 2009. Through that incident she weakened the nation’s military and border guards, and brought them against one another. From then on, she has been involved in various conspiracies to sow distrust and doubt in the mind of the people about our military and paramilitary. The BGB, which has the glorious legacy of BDR’s (Bangladesh Rifles) decades of defending the nation from Indian incursions, is now being used as an extension of Border Security Force (BSF) of India in threatening the people living near the border. It should be noted that, last Tuesday (12/02/19) Border Guard Bangladesh (BGB) personnel opened fire on the agitating villagers of Thakurgaon border and killed 3 people. Instead of being deployed for defending the border, tyrant Hasina is using BGB as a tool against the people in every occasion when the people take to the streets against the government, like when they did during the road safety movement, and other protests. Moreover, Hasina created controversy about the sincerity and dedication of our army, when caving in to popular demand she deployed the army during the national election, but maliciously gave them no duty or authority making them silent witnesses of her farcical election.

O Muslims! Tyrant Hasina wants your Muslim military and para-military forces to be controversial – the forces that have been built with your hard-earned labour and money, because she knows well that, only they can stop her tyrannical rule and can transfer power to the sincere and aware leadership of Hizb ut Tahrir. Besides, she wants these forces to be subservient mercenaries of the Kafir imperialists USA-India. Her stance is against you and your defence forces – she killed our brilliant officers at Pilkhana at the behest of India-America, and now, on one hand she is serving American interest by sending our army to join the “Saudi alliance against Islam” and is trying to make the BGB subservient to India by forcing them to be trained there, and on the other hand, is using the same BGB as a tool to repress the people whenever they take to the streets on legitimate demands. Therefore, O Muslims, you must also take stance against her, So, unite under the leadership of Hizb ut Tahrir in the movement to remove tyrant Hasina and strongly demand from the sincere officers in the military so that they give nusrah (material support) to Hizb ut Tahrir for the re-establishment of the Khilafah Rasidah (rightly guided Caliphate).

O Sincere Officers in the Military! The killer of army officers, Hasina, is forcing you to forget the Indian involvement behind the killing and mutilation of your fellow officers in Pilkhana and wants you to hug the killers of your slain brothers. She forced you to celebrate picnics with the arch-enemy of Muslims, India and, on the other hand she forced your border guards to act like clowns by exchanging flowers and sweets or giving ‘rakhi bondhon’ (brotherhood bond – a culture Hindu men practice with their sisters) with members of killer BSF. Neglecting the duty of protecting the nation and the people in the border area, she is deploying this very force against their own people. How long will you tolerate the treacherous activities of Hasina? How long you keep your sword of capabilities and powers enclosed? Do you not want to see Hasina’s trial for her crime of killing your brothers at Pilkhana? So, march forth to remove the tyrant of this land, Hasina and transfer authority to Hizb ut Tahrir to establish the Khilafah (Caliphate) in the method of Prophethood. Hizb ut Tahrir calls you towards the life of honour, dignity and glory, as promised by our beloved Prophet, Muhammad ﷺ:

“A group of you will conquer India, Allah will open for them [India] until they come with its rulers chained; when they return back [from India] – Allah having forgiven their sins – they will find Isa ibn Maryam in Syria.” [Na’im b. Hammad in al-Fitan reports from Abu Hurayrah]