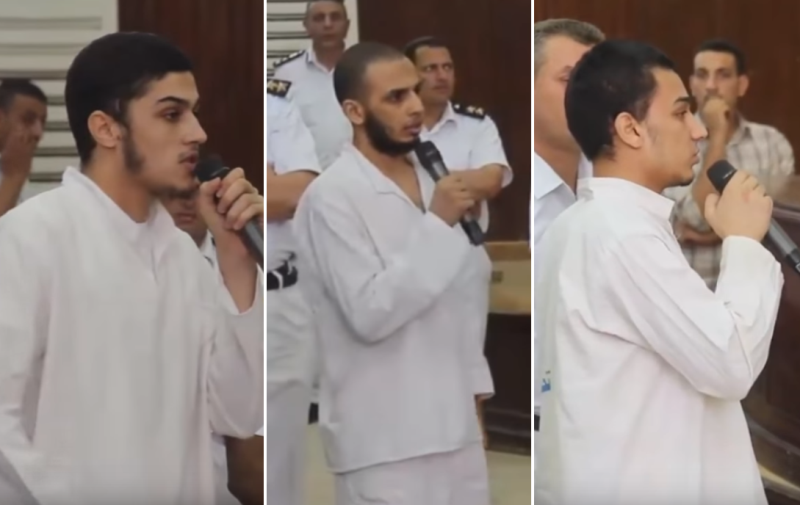 On the Dar al-Ifta website, and by the production of its animation unit, it has confirmed that “what the institutions of the state, its army and its police are committing of resistance and war against ‘astray terrorist’ groups is one of the highest types of Jihad for the sake of Allah; because it protects the religion from being distorted by the misguided ones, protects the Muslim countries and preserves the sanctity of blood, honor and property. And those who were killed by these Khawarij is a martyr.” Dar Al-Ifta explained in a Motion Graphic video issued on 21/2/2019, that the Prophet (pbuh) told us about the appearance of the Khawarij and the streams of misguidance, who made Takfeer on Muslims, and legalized their killing and desecrated their countries. The Messenger of Allah (pbuh) described these groups as corrupters in the land, have left the Deen, and that the Sharii ruling is to fight and kill them, as the Messenger of Allah (pbuh) said regarding them: «لَئِنْ أَدْرَكْتُهُمْ لَأَقْتُلَنَّهُمْ قَتْلَ عَادٍ» “If I were to ever find them I would kill them like ‘Ad”.

Al-Dar also pointed to the command of the Messenger of Allah (pbuh) to find and kill them, when he said:«فأينَما لَقِيتُمُوهُم فَاقتُلُوهُم، فَإِنَّ فِي قَتلِهِم أَجراً لِمَن قَتَلَهُم يَومَ القِيَامَةِ» “So, where-ever you find them, kill them, for whoever kills them shall have reward on the Day of Resurrection.” The scholars unanimously agreed that these groups of Khawarij and transgressors should be fought against; because in fighting them, Islam is protected, (an image here was presented by the unit of a “terrorist” – a bearded young man wearing a white robe).

The West describes Islam as “terrorism”, and considers every Muslim a “terrorist” unless he renounces his Islam in totality, and follow the new religion marketed by America through Al-Azhar, Awqaf, and Dar Al-Ifta, a religion that does not deal with politics and has no view of life or a way of living, and whoever tries to evade this perception that the West wants for our country is a “terrorist” according to the American concept. It is not strange of them or surprising to portray the “terrorist” in the form of a young man with a beard wearing a white abaya but what is strange is that the same perception is adopted by those who portray themselves (as they claim) as the protectors of Islam and its ideas, which is innocent of them! The portrayal of the “terrorist” in the bearded manner is a great insult to Islam, His Messenger and his Sunnah, no less than the drawings of the French magazine. It adopts the same view of the enemies of the Ummah in describing Islam as “terrorism” and inciting them to kill those who call for its application again, while at the same time, we have not seen their drawings that talk about the terrorism of America in Iraq, Libya, Yemen and Syria, nor the terrorism of China with the Muslims of the Uighurs, and we have not seen them talk about the terrorism of Jews in the Masra of the Messenger of Allah (pbuh)… Only what the masters in the White House want is what must happen, perhaps because it is a new religion inspired by the Pentagon to their new messenger of the religious revolution and the renewal of religious discourse, Museilamah of this era!

What is done by the institutions of the state, its army and its police cannot be described as a jihad but rather a declared war against Allah and His Messenger, a protection of the capitalist system that governs Egypt and the Ummah, and an unjust exploitation of the people’s honor, blood, money and property, not its preservation. They are collaborators in the blood that is shed and will be asked before Allah on the Day of Resurrection about it.

In a clear incitement to kill all those who have an Islamic sense, Dar al-Ifta’ incite the killing of those it describes as misguided Khawarij, but who is the misguided one, the one who is calling for the application of Islam, or the one who approves kufr laws that govern the country and oppress the people?! And who did they rebel against? Is the one who rules by the laws of the West and burns and demolishes mosques equal to Ali bin Abi Talib, may Allah be pleased with him, who would have killed you if he saw you! May Allah wage war against you, how perverted are your minds! Against which Wali Amr (guardian) did they rebel, and which from among your rulers rule with Islam that makes you say that they are Khawarij?! The Khawarij are the ones who rebel against the Khaleefah of the Muslims, and your regime, which you are fighting for, does not recognize the Caliphate as a system of government and fights those who work to return it on the grounds that they are “terrorists”. Who are the Khawarij then? The ones who work to restore the Caliphate, or those who fight it?!

Your reference to the Hadith of the Messenger of Allah (pbuh) is a pure lie and an exposed cheap attempt to justify the crimes of this regime, that has delved in the blood of the people of Egypt through murder, burning, crushing and choking, and by doing this, you are thus removing the mulberry leaf that was hiding your shame in the face of those who still had respect for you of the people of Egypt and others who were deceived by you for decades.

O people of Al-Kinanah! These are the men of fatwa approved by the state, Allah has disgraced them before you, they are participating in your killing and insulting your religion and the Sunnah of your Prophet, so keep them behind your backs and do not listen to them. They invite you to humiliation in this world and to disgrace in the Hereafter. Restrain yourself with the truthful people who are truly capable of clashing with the West and its ideas and systems; your brothers in Hizb ut Tahrir who are working to implement Islam in its state, the Khilafah Rashidah (Righteous Caliphate) on the method of the Prophet, only lack in this way your embrace to their idea and the sincere support of the faithful in Al-Kinanah (Egypt) army, to repeat the biography of the past supporters (Ansar), giving bay’ah to those who will establish with them and through them state that brings our countries into one state governed by one Khaleefah, governing us with Islam that Allah has accepted for us, and restore for us what the West has plundered of our wealth and our goods, and truly preserves for us our religion, honor, money and our possessions that were desecrated by the enraged dogs of the West, our agent rulers, and you will remember what I say unto you, I confide my cause unto Allah, Allah (ever) watches over His servants.

“O you who have attained to faith! Respond to the call of Allah and the Apostle whenever he calls you unto that which will give you life; and know that Allah intervenes between man and [the desires of] his heart, and that unto Him you shall be gathered.”