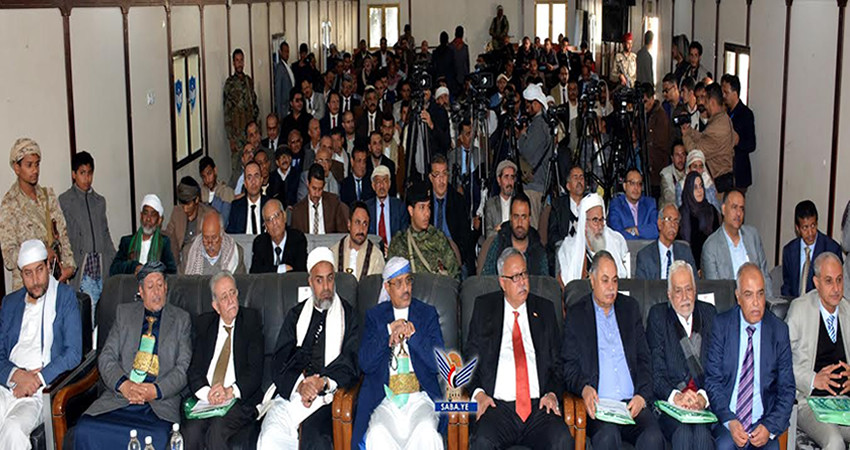 Member of the Supreme Political Council Sultan Al-Sami’i and Prime Minister Dr. Abdulaziz Saleh bin Habtoor participated in the economic symposium on “Islamic Banking during crises” organized yesterday in Sana’a by the Association of Yemeni Scholars and the Economic Observatory for Studies and Consultations in cooperation with the Yemeni Academy for Higher Studies (Al-Thawra Newspaper, Friday, 15/01/2021).

The Association of Yemeni Scholars organized Islamic banking to guide people on how to deal in money exchange matters on the basis of Islam, and it remained silent for a long time with the deceased Ali Saleh and for six years under the Houthis, and the silence of those in the Yemeni Scholars Association will continue if they do not respond to Allah’s command and repent and disclose. Their silence will continue on the control of the capitalist economy which is based on fighting Allah and His Messenger in its dealings that are based on the separation of religion from life, taking mental utilitarianism as a guide for it, the control of the World Bank and the International Monetary Fund over Yemen’s economy – with the approval of the Supreme Political Council – and riba-based dealings in local banks, mandatory local paper money without gold coverage, state acquisition of oil, which is public property and not state property, and selling what it does not own … etc.

The Association of Yemeni Scholars has disappointed those who follow its actions from the people of Yemen and others, who are eager to end the riba-based dealings of the Central Bank and other local banks, and that the association has ended it, and now it has reached the point of following up on banking and controlling it according to Sharia, and that it will guide them and bear the torch of good in the darkness of the world, but how could they?

This is with regard to the Association of Yemeni Scholars. As for the government whose prime minister attended, how can he participate in the Islamization of the banking part, and on the same day his deputy, Hussein Maqbouli, and Minister of Social Affairs Obaid Salem bin Dabaie participate in attending a session of the emergency cash transfer project funded by the leaders of the capitalist economy. UNICEF and the World Bank?! Who does not know of Allah Almighty’s saying: ذَٰلِكَ بِأَنَّهُمْ قَالُوا إِنَّمَا الْبَيْعُ مِثْلُ الرِّبَا وَأَحَلَّ اللَّهُ الْبَيْعَ وَحَرَّمَ الرِّبَا؟ “That is because they say, “Trade is [just] like interest.” But Allah has permitted trade and has forbidden interest”. [Al-Baqarah: 275].

Where is the love of the Prophet ﷺ who said: «وَرِبَا الْجَاهِلِيَّةِ مَوْضُوعٌ، وَأَوَّلُ رِبًا أَضَعُ رِبَانَا رِبَا عَبَّاسِ بْنِ عَبْدِ الْمُطَّلِبِ، فَإِنَّهُ مَوْضُوعٌ كُلُّهُ» “And the riba (usury) of Jahiliyah (the Days of Ignorance) is abolished, and the first of our usury I abolish is that of ‘Abbas b. ‘Abd al-Muttalib, for it is all abolished.” or is the love of the Messenger of Allah always absent but is present once a year?!

The second Khilafah Rashidah (righteous Caliphate) on the method of the Prophethood is the one that will sponsor the people of Yemen with Islam and will apply the economic system in Islam, and will discard the capitalist economic system, for these are its days whose time has come and its dawn has approached. The Messenger of Allah ﷺ said: «ثُمَّ تَكُونُ خِلَافَةٌ عَلَى مِنْهَاجِ النُّبُوَّةِ» “then there will be a Khilafah on the Method of Prophethood” [Extracted by Ahmad on the authority of Nu’man bin Bashir].